Comments (0)
Add to wishlistDelete from wishlist
Cite this document
Summary
It does not apply employee satisfaction, which states, that employees in a particular workplace have a right to be satisfied by their work. The employers are accountable of motivating workers skills with his or her…
Download full paperFile format: .doc, available for editing
HIDE THIS PAPERGRAB THE BEST PAPER91.3% of users find it useful 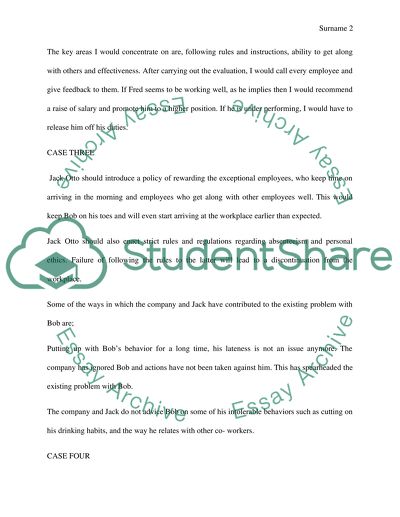 CASE ONE The salary system of Joan’s workplace is not efficient at all. It does not apply employee satisfaction, which states, that employees in a particular workplace have a right to be satisfied by their work. The employers are accountable of motivating workers skills with his or her job. Some of the weaknesses portrayed in this sector are;
There is no sharing of feedback between the employees and supervisors. Fred is not given a chance to share his feelings about the work place in general. This made him feel discontented and started causing serious delays in projects.
There is favoritism and discrimination going on at the workplace. An employee such as Fred, despite the fact that he is more skill oriented than Bob, and performs exceptionally well does not get an increase of his salary.
There is the lack of privacy. Employees are not supposed to share their some information especially when it is salary oriented. Sharing this information could lead to a lot of conflicts in the workplace.
As the director, I would carry out an evaluation process on each employee. I would do this by initiating a scale rating which usually indicates the strengths and weaknesses of every employee. The key areas I would concentrate on are, following rules and instructions, ability to get along with others and effectiveness. After carrying out the evaluation, I would call every employee and give feedback to them. If Fred seems to be working well, as he implies then I would recommend a raise of salary and promote him to a higher position. If he is under performing, I would have to release him off his duties.
CASE THREE
Jack Otto should introduce a policy of rewarding the exceptional employees, who keep time on arriving in the morning and employees who get along with other employees well. This would keep Bob on his toes and will even start arriving at the workplace earlier than expected.
Jack Otto should also enact strict rules and regulations regarding absenteeism and personal ethics. Failure of following the rules to the latter will lead to a discontinuation from the workplace.
Some of the ways in which the company and Jack have contributed to the existing problem with Bob are;
Putting up with Bob’s behavior for a long time, his lateness is not an issue anymore. The company has ignored Bob and actions have not been taken against him. This has spearheaded the existing problem with Bob.
The company and Jack do not advice Bob on some of his intolerable behaviors such as cutting on his drinking habits, and the way he relates with other co- workers.
CASE FOUR
Policies usually provide ethics by which an institute governs its employee relations in a fair and steady manner. The policies and procedures help employees be aware of what is expected and can prevent misunderstandings about employer policies. Some of the policies which could have prevented the problem from happening are;
Leaves of absence policy
This entails personal leave of absence with appropriate reasons such as educational and medical leave.
Vacations policy
This policy entails length of vacation, the specified duration, attendance requirements. The vacation policy would have prevented the issue from arising.
George should establish a method for all employees in his department to report complains confidentially. He should also incorporate objectives into the company goals and work hard to achieve them in order to establish a more coordinated department.
CASE FIVE
This case illustrates lack of HR Planning in that it does not retain the highly skilled staff. The company does not monitor the extent at which he employees are resigning and going to other companies.
The company does not discover the reasons as to why their employees are leaving. This does help in rectifying the situation.
The company does not compare the loss rates with other similar companies in the area.
Some of the approaches used in recruiting mechanics are;
Direct Approach
In this approach, the representatives of companies are sent to potential candidates in the educational and training institutes. They establish contacts with the candidates seeking for mechanical jobs.
Indirect approach
Indirect approaches include advertising of mechanical jobs in the newspapers, billboards, technical magazines, on the radio and televisions. When advertising, a list of advantages the job will offer is usually included.
Third party approach
These include the use of private employment agencies, management consultants, employee referral or recommendations in order to establish mechanic job seekers.
Work cited
Halbrook, R. "Job satisfaction, service capability, and customer satisfaction: An examination of linkages and management implications." Journal of Business (2009): 56. Read More
Share:
Tags
Cite this document
(“Case study Example | Topics and Well Written Essays - 500 words - 7”, n.d.)
Case study Example | Topics and Well Written Essays - 500 words - 7. Retrieved from https://studentshare.org/miscellaneous/1586459-case-study