Comments (0)
Add to wishlistDelete from wishlist
Cite this document
Summary
These are broadly categorized into embryonic, adult, and induced pluripotent stem cells. Embryonic stem cells are “pluripotent”, having the capacity to develop into any…
Download full paperFile format: .doc, available for editing
HIDE THIS PAPERGRAB THE BEST PAPER92.4% of users find it useful 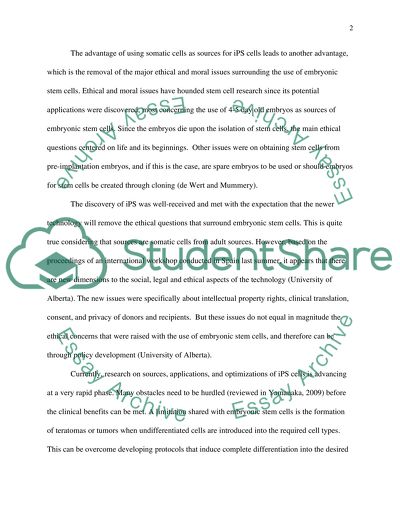 Advantages of Induced Pluripotent Stem Cell Research Stem cells are undifferentiated or naïve cells that are capable of developing into other types of cells. These are broadly categorized into embryonic, adult, and induced pluripotent stem cells. Embryonic stem cells are “pluripotent”, having the capacity to develop into any of the specialized cells in the body (e.g. heart, muscle, and retina), thereby providing unlimited potential for cell and regenerative therapies (Pera, Reubinoff and Trounson). Adult stem cells come from adult tissues. These are called multipotent; they can differentiate only to limited types, usually to the same tissues from whence they came from. A very important breakthrough came two years ago with the discovery that adult multipotent adult stem cells can be induced, by the addition of transcription factors, to convert into pluripotent cells (Takahashi, Tanabe and Ohnuki). These cells came to be known as induced pluripotent stem cells or iPS cells.
Research of iPS cell technology must be promoted because of the many advantages of using iPS cells compared to the other stem cell types. The first major advantage is the use of somatic tissues instead of embryos as sources. Various types of somatic tissues can be used as sources of iPS cells for the repair of damaged tissues (Yu, Vodyanik and Smuga-Otto). Patient-derived somatic cells can produce patient-specific iPS cells that contain the patient’s genetic information. When these iPS cells are used in transplantation to replace diseased cells, the risk for rejection is reduced. Immune rejection is a problem in the use of embryonic stem cells (de Wert and Mummery). Another potential application is to use the iPS cells for constructing specific disease models and screening for effective drugs (Yamanaka). The potential therefore is high for healing degenerative and chronic diseases like cystic fibrosis, chronic heart problems, Alzheimer’s disease, Parkinson’s disease and many more (Yamanaka).
The advantage of using somatic cells as sources for iPS cells leads to another advantage, which is the removal of the major ethical and moral issues surrounding the use of embryonic stem cells. Ethical and moral issues have hounded stem cell research since its potential applications were discovered, most concerning the use of 4-5 day old embryos as sources of embryonic stem cells. Since the embryos die upon the isolation of stem cells, the main ethical questions centered on life and its beginnings. Other issues were on obtaining stem cells from pre-implantation embryos, and if this is the case, are spare embryos to be used or should embryos for stem cells be created through cloning (de Wert and Mummery).
The discovery of iPS was well-received and met with the expectation that the newer technology will remove the ethical questions that surround embryonic stem cells. This is quite true considering that sources are somatic cells from adult sources. However, based on the proceedings of an international workshop conducted in Spain last summer, it appears that there are new dimensions to the social, legal and ethical aspects of the technology (University of Alberta). The new issues were specifically about intellectual property rights, clinical translation, consent, and privacy of donors and recipients. But these issues do not equal in magnitude the ethical concerns that were raised with the use of embryonic stem cells, and therefore can be through policy development (University of Alberta).
Currently, research on sources, applications, and optimizations of iPS cells is advancing at a very rapid phase. Many obstacles need to be hurdled (reviewed in Yamanaka, 2009) before the clinical benefits can be met. A limitation shared with embryonic stem cells is the formation of teratomas or tumors when undifferentiated cells are introduced into the required cell types. This can be overcome developing protocols that induce complete differentiation into the desired type. Other limitations are the uncertainty in determining the complete reprogramming of somatic cells to the pluripotent state, and the possibility of activating introduced transgenes in the genome of iPS cells, because factors inducing iPS cells formation are introduced attached to viruses. These viruses when integrated into the patient’s genome can be activated and cause unforeseen harm.
IPS cell technology holds great biomedical potential and countless benefits for patients with no options but cell-based therapies. There is no doubt that the present limitations can be overcome because of the fast-paced research techniques and advanced tools available to the researcher.
References
de Wert, G and C. Mummery. "Human Embryonic Stem Cells: Research, Ethics And Policy." Human Reproduction 18.4 (2003): 672-682, DOI: 10.1093/humrep/DEG143.
Pera, M, B Reubinoff and A. Trounson. "Human Embryonic Stem Cells." Journal of Cell Science 113 (2000): 5-10.
Takahashi, K, et al. "Induction Of Pluripotent Stem Cells From Adult Human Fibroblasts By Defined Factors." Cell (2007): doi:10.1016/j.cell.2007.11.019.
University of Alberta. "IPS Cells Raise New Ethical Questions In Stem Cell Debate." 10 December 2009. Science Codex. 13 December 2009 .
Yamanaka, S. "A fresh look at iPS cells." Cell 137 (2009): 13-17.
Yu, J, et al. "Induced Pluripotent Stem Cell Lines Derived from Human Somatic Cells." Sciencexpress (2007): 1-8 www.sciencexpress.org / 20 November 2007 / Page 1 / 10.1126/science.1151526. Read More
Share:
Tags
Cite this document
(“Advantages of Induced Pluripotent Stem cell research Essay”, n.d.)
Advantages of Induced Pluripotent Stem cell research Essay. Retrieved from https://studentshare.org/miscellaneous/1560993-advantages-of-induced-pluripotent-stem-cell-research

.... Adult stem cells- Numerous adult tissues also possess stem cells. These stem cells are harvested to rectify ailments or cloning tissues, organs, animals or humans or they may be harvested for gene-line engineering. The gene-line engineering aims to function towards disease resistance and functional improvement. Induced pluripotent cells- Through nuclear programming scientists have transformed adult cells into stem cells. Nuclear programming alters the genes to behave like embryonic stem cells and thereby avert immune rejection, although adverse effects could not be documented so far. Amniotic fluid stem cells- Researchers have documented the presence of stem cells in amniotic fluid (Where do stem cells come from?; Stem cells... ?...
5 Pages(1250 words)Research Paper

...? of the of the Stem cell Few science and technology issues have lit so much fire of debate as the stem cells research. Stem cells are found in almost all the multi-cellular organisms. Stem cells discovery is an astonishing development in the medical sciences which would have limitless uses in this field. These cells are unspecialized cells characterized by their ability to develop into various different types of cells in the body, for example. Stem cells are found inside the bone marrow as well as in a...
5 Pages(1250 words)Research Proposal

...diseases like the diabetes, Alzheimer’s disease, Parkinson disease, spinal cord injuries among other terminal diseases. However, the belief attached to embryonic stem cell therapy on human beings was derived from a successful scientific test, which involved mice. Recently, pluripotent stem cell was innovated and is undergoing research before approval as an alternative source of stem cell. Owing to the fierce controversies that surround human embryonic stem cells research, many concerned countries have formulated laws, which either illegalize or support...
5 Pages(1250 words)Research Paper

...more research on stem cells, as long as these experiments do not distort any of the established religious beliefs. Objectives: Most scientists agree that stem cells have many medical advantages. Some scientists even regard stem cells as offering a great potential for the alleviation of human suffering, as they can provide cure for a number of diseases. Millions of people around the world suffer from diseases that may be treated more effectively with stem cells. These diseases include Alzheimer, Diabetes, Parkinson’s, and heart disease, and certain types of cancer...
5 Pages(1250 words)Research Paper

...STEM CELL OUTLINE Introduction: One of the gravest moral and ethical issues facing people today is that of stem cell research. The two sides of this debate are very polarized, neither brooking any opposition. The positions are so seriously engrained and so emotional, that it can be very difficult reason things out. The stem cell research debate bring up many philosophical and moral issues such as what constitutes life, when does life begin, and how is life created. These questions are fundamental to our social values and say a lot about the way we think about life. Thesis: The stem...
2 Pages(500 words)Essay

...STEM CELLS One of the gravest moral and ethical issues facing people today is that of stem cell research. The two sides of this debate are very polarized, neither brooking any opposition. The positions are so seriously engrained and so emotional, that it can be very difficult reason things out. The stem cell research debate bring up many philosophical and moral issues such as what constitutes life, when does life begin, and how is life created. These questions are fundamental to our social values and say a lot about the way we think about life. The stem cell debate is...
5 Pages(1250 words)Essay

...as the fetus’ rights. The bible however states how life begins at the first breath of a person and not during conception. In addition, the early Christian philosophers had very little understanding on conception as well as the blastocyst (Monroe, Miller, & Tobis 83). Generally, the Christians do not support the embryo stem cell research despite having contradictory statements over life but that should not be an excuse to take the life we have at hand for granted. Researchers have managed to treat mice infected with diabetes experimentally by establishing the necessary stem cells that are pluripotent. These...
6 Pages(1500 words)Essay
sponsored ads
Save Your Time for More Important Things
Let us write or edit the essay on your topic "Advantages of Induced Pluripotent Stem cell research" with a personal 20% discount.
GRAB THE BEST PAPER

Let us find you another Essay on topic Advantages of Induced Pluripotent Stem cell research for FREE!