Comments (0)
Add to wishlistDelete from wishlist
Cite this document
Summary
In fact, Langdale (1997) asserts that the emergence of broadband technology has brought many possibilities to internet users at a faster rate. It is evident that in the future, Internet through…
Download full paperFile format: .doc, available for editing
HIDE THIS PAPERGRAB THE BEST PAPER98.1% of users find it useful 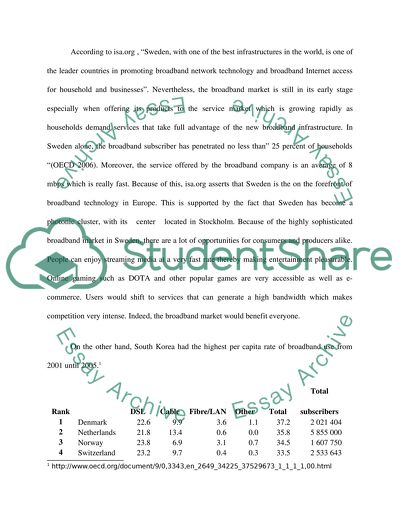 Download file to see previous pages Controlling access to the broadband infrastructure could potentially create an oligopoly and threaten the variety and diversity of services available.
One of the countries with the highest broadband penetration rates in Europe is Sweden. It reflects the effectiveness of broadband policies by the government and the rapid adaptation of Swedish people in emerging technologies. The DSL service is the most popular broadband service among the Swedish users; however, the other internet services such as fiber, LAN, and cable are also used. (OECD table)
According to isa.org , “Sweden, with one of the best infrastructures in the world, is one of the leader countries in promoting broadband network technology and broadband Internet access for household and businesses”. Nevertheless, the broadband market is still in its early stage especially when offering its products to the service market which is growing rapidly as households demand services that take full advantage of the new broadband infrastructure. In Sweden alone, the broadband subscriber has penetrated no less than” 25 percent of households “(OECD 2006). Moreover, the service offered by the broadband company is an average of 8 mbps which is really fast. Because of this, isa.org asserts that Sweden is the on the forefront of broadband technology in Europe. This is supported by the fact that Sweden has become a photonic cluster, with its center located in Stockholm. Because of the highly sophisticated broadband market in Sweden, there are a lot of opportunities for consumers and producers alike. People can enjoy streaming media at a very fast rate thereby making entertainment pleasurable. Online gaming such as DOTA and other popular games are very accessible as well as e-commerce. Users would shift to services that can generate a high bandwidth which makes competition very intense. Indeed, the broadband market would benefit everyone.
Although Sweden as well as other developed ...Download file to see next pagesRead More
Share:
Cite this document
(“A comparative Study of Telecommunication Policy, Sweden and South Essay”, n.d.)
A comparative Study of Telecommunication Policy, Sweden and South Essay. Retrieved from https://studentshare.org/miscellaneous/1559110-a-comparative-study-of-telecommunication-policy-sweden-and-south-korea-broadband-service-diffusion

To ensure that the education sector is diversified it is seen that in the United States of America many such policies have been implemented. In 1970s diversity was considered an important tool by the educational experts so that they could help students understand each other. The board of education of North Carolina then formulated a scheme for students through which they could practice a diversity of races in schools. This was known as the North Carolina Wake County Busing Policy which was functional till the late twenty-first century. It was now in July 2010 that the issue was raised again by the educational board members who then decided to scrap the policy of diversity with community-based schools. (Liane Membis 2010; Stacy Tei...
7 Pages(1750 words)Case Study
sponsored ads
Save Your Time for More Important Things
Let us write or edit the essay on your topic "A comparative Study of Telecommunication Policy, Sweden and South Korea: Broadband Service Diffusion" with a personal 20% discount.
GRAB THE BEST PAPER

Let us find you another Essay on topic A comparative Study of Telecommunication Policy, Sweden and South Korea: Broadband Service Diffusion for FREE!