Comments (0)
Add to wishlistDelete from wishlist
Cite this document
Summary
Constructivism refers to moving away from the traditional logical positive world view that influences the development and growth of the traditional career…
Download full paperFile format: .doc, available for editing
HIDE THIS PAPERGRAB THE BEST PAPER91% of users find it useful 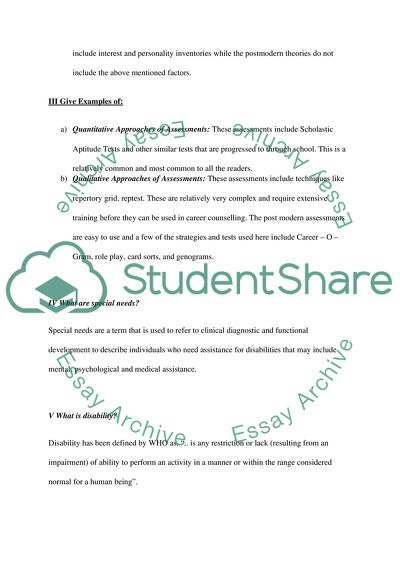 I Define: a) Quantitative Approaches of Assessments: These are theoretically based interventions that are grounded on constructivism. Constructivism refers to moving away from the traditional logical positive world view that influences the development and growth of the traditional career assessments. Quantitative career assessments has been recognised to be idiographic in nature and here it is the individual that serves as the point to identify the pertinent and the interpreting meaning of the events as well.
b) Qualitative Approaches of Assessments: This is an objective approach and has several less rigid parameters. According to Goldman, the qualitative approaches to assessment needs is more clients involves and is based a lot more on the standardised or objective tests.
II Explain:
a) Quantitative Approaches of Assessments: This form of assessment includes self – efficacy measurements. Here the individual’s judgement to judge the ability to perform a task at a level. “These self – efficacy cognitions mediate action with the result that individuals avoid tasks or activities they believe are beyond their capabilities and instead engage in those they judge themselves capable of performing”.
b) Qualitative Approaches of Assessments: These assessments are based on two major philosophical positions, post modern and logical positivism. The major practical differences between each of the perspectives are mainly in the assessment area. The logical positivists have relied a lot on the traditional measurement devices. These include interest and personality inventories while the postmodern theories do not include the above mentioned factors.
III Give Examples of:
a) Quantitative Approaches of Assessments: These assessments include Scholastic Aptitude Tests and other similar tests that are progressed to through school. This is a relatively common and most common to all the readers.
b) Qualitative Approaches of Assessments: These assessments include techniques like repertory grid, reptest. These are relatively very complex and require extensive training before they can be used in career counselling. The post modern assessments are easy to use and a few of the strategies and tests used here include Career – O – Gram, role play, card sorts, and genograms.
IV What are special needs?
Special needs are a term that is used to refer to clinical diagnostic and functional development to describe individuals who need assistance for disabilities that may include mental, psychological and medical assistance.
V What is disability?
Disability has been defined by WHO as, “.. is any restriction or lack (resulting from an impairment) of ability to perform an activity in a manner or within the range considered normal for a human being”.
VI List special needs in book:
There are several special needs that are present. The author talks of eight essential needs which include:
a) Individuals with disabilities, which include both physical as well as mental disabilities,
b) Women in the workplace,
c) Displaced workers,
d) Workers with economic disadvantages,
e) Minorities group and ethnic minorities,
f) Midlife job changers,
g) Delayed Entrants to the workforce, and
h) Older workers
VII List disabilities in book:
The Disabilities as listed in the book include: a) Mobility, b) Hearing, c) Visual, d) Seizure Disorders, e) Developmental (example Mental retardation, autism, epilepsy, Down Syndrome), f) Psychiatric and g) Cognitive (example Learning disabilities, attention deficit disorder). Read More
Share:
Tags
Cite this document
(“Questions Essay Example | Topics and Well Written Essays - 500 words - 9”, n.d.)
Questions Essay Example | Topics and Well Written Essays - 500 words - 9. Retrieved from https://studentshare.org/miscellaneous/1557942-questions