Comments (0)
Add to wishlistDelete from wishlist
Cite this document
Summary
Education has been perceived as the most vital element of social fabric that plays a crucial in the character building of the children and adults alike. Jefferson, an eminent reformer of eighteenth century had asserted that education is necessary as it is the main facilitator of…
Download full paperFile format: .doc, available for editing
HIDE THIS PAPERGRAB THE BEST PAPER95.2% of users find it useful 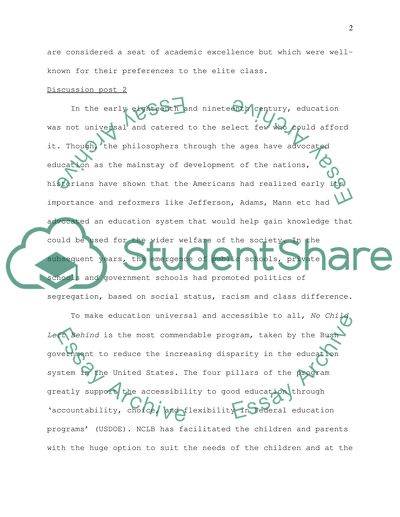 Discussion post Education has been perceived as the most vital element of social fabric that plays a crucial in the character building of the children and adults alike. Jefferson, an eminent reformer of eighteenth century had asserted that education is necessary as it is the main facilitator of moral values within the society and thereby a virtue in itself. Horace Mann, on the other hand, has further added to the belief of Jefferson and says that benefits of education must percolate down to the people at large and promote the wider welfare of the society. Other social scientists and leaders like John Adams and Owen have understood the wider implications of education and believed that along with propagation of knowledge, it should also become a tool for preserving the constitution of the nation.
Gutek, the modern educationalist has been quite vociferous in promoting radical reforms in the education system to meet the challenges of the contemporary environment of pluralistic society and fast advancing technology. He reaffirms the relevance of the philosophies of Mann, Adams etc. and categorically says that educational institutes must widen their vision and mission to include children and people from diverse background. The goals of NCLB have thus, brought the Public schools to the common man who can now access education, especially in the public schools that are considered a seat of academic excellence but which were well-known for their preferences to the elite class.
Discussion post 2
In the early eighteenth and nineteenth century, education was not universal and catered to the select few who could afford it. Though, the philosophers through the ages have advocated education as the mainstay of development of the nations, historians have shown that the Americans had realized early its importance and reformers like Jefferson, Adams, Mann etc had advocated an education system that would help gain knowledge that could be used for the wider welfare of the society. In the subsequent years, the emergence of public schools, private schools and government schools had promoted politics of segregation, based on social status, racism and class difference.
To make education universal and accessible to all, No Child Left Behind is the most commendable program, taken by the Bush government to reduce the increasing disparity in the education system in the United States. The four pillars of the program greatly support the accessibility to good education through ‘accountability, choice, and flexibility in Federal education programs’ (USDOE). NCLB has facilitated the children and parents with the huge option to suit the needs of the children and at the same time, it ensures that the institutions and authorities meet the criteria of the state to effectively implement the goals of the program. Indeed, educational leadership has become extremely significant because the fast changing socio political environment has necessitated the incorporation of rapid improvisation in the teaching methodology as well as accepting the challenge of creating a cohesive and encouraging atmosphere.
Reference
US Department of Education. (2001). Executive Summary. Available from: [Accessed 2 August, 2009]. Read More
Share:
Tags
Cite this document
(“Two One page orders for a discussion post - not a paper just to be Essay - 3”, n.d.)
Two One page orders for a discussion post - not a paper just to be Essay - 3. Retrieved from https://studentshare.org/miscellaneous/1556757-two-one-page-orders-for-a-discussion-post-not-a-paper-just-to-be-done-as-a-discussion-board-post

“Two One Page Orders for a Discussion Post - Not a Paper Just to Be Essay - 3”, n.d. https://studentshare.org/miscellaneous/1556757-two-one-page-orders-for-a-discussion-post-not-a-paper-just-to-be-done-as-a-discussion-board-post.
Comments (0)
Click to create a comment or rate a document

... of the world to develop his Theory of Forms. Another important aspect of Plato’s ideas revolve around his realization that an unhappy man cannot make an effective ruler because he is continually struggling to find what will make him happy rather than being concerned with the welfare of the state, thereby helping define what he means when he mentions ethics. Further evidence of Socrates’ influence can be seen in Plato’s idea that only the unjust are unhappy, so to be happy (to achieve the greatest good), one must first be just, which requires a developed sense of ethics. Plato attempts to define the term “justice” in his first chapter of The Republic. This is done by repeating the discussion held by Socrates and several others regarding...
12 Pages(3000 words)Case Study

Erving Goffman was an astute observer of society, who immersed himself in the social environment which he was studying. He carefully observed and recorded the ways in which people’s behavior and interpersonal interactions are carried out in everyday life. He notes that “people perform their social roles and, as they do so, they produce social order through their actions and the regu...
6 Pages(1500 words)Article
sponsored ads
Save Your Time for More Important Things
Let us write or edit the essay on your topic "Two One page orders for a discussion post - not a paper just to be done as a discussion board post" with a personal 20% discount.
GRAB THE BEST PAPER

Let us find you another Essay on topic Two One page orders for a discussion post - not a paper just to be done as a discussion board post for FREE!