Comments (0)
Add to wishlistDelete from wishlist
Cite this document
Summary
A manager is one who is ultimately responsible for the completion of a particular task, the level of overall interaction amongst team members, the overall evaluation and monitoring of performance and quality of the output. A manager has a particular position that allows for the…
Download full paperFile format: .doc, available for editing
HIDE THIS PAPERGRAB THE BEST PAPER94.9% of users find it useful 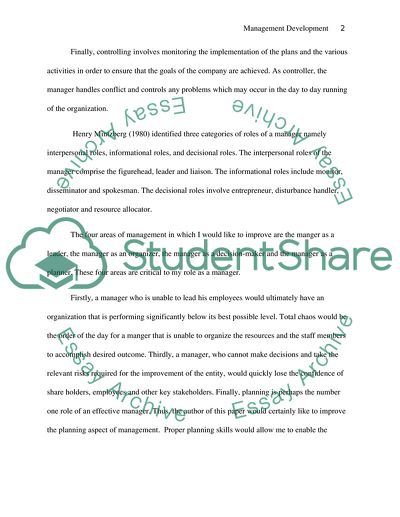 Download file to see previous pages Planning is the foundation of all other management functions. The manager as planner assesses the present position of the company and allocates various steps to improve the company’s position in the future. Further, the manager locates the resources necessary to achieve the organization’s objectives.
1 Leadership involves effective communication skills, decision-making skills, planning and implementation, intelligence, and last but not least, influence. A manager, as a leader, needs to motivate employees to perform at their optimum level. In addition, leading entails having a vision and guiding the employees to fulfill this vision through effective communication.
Organizing which comprise creating a structure for both the oral and written plans to be accomplished is yet another critical function. The manager delegates the various responsibilities and subtasks to the competent employees. What is more, managers address the important dimension of implementation of the various plans which are formulated.
Finally, controlling involves monitoring the implementation of the plans and the various activities in order to ensure that the goals of the company are achieved. As controller, the manager handles conflict and controls any problems which may occur in the day to day running of the organization.
Henry Mintzberg (1980) identified three categories of roles of a manager namely interpersonal roles, informational roles, and decisional roles. The interpersonal roles of the manager comprise the figurehead, leader and liaison. The informational roles include monitor, disseminator and spokesman. The decisional roles involve entrepreneur, disturbance handler, negotiator and resource allocator.
The four areas of management in which I would like to improve are the manger as a leader, the manager as an organizer, the manager as a decision-maker and the manager as a planner. These four areas are critical to my role as a manager.
Firstly, a manager who is unable to lead ...Download file to see next pagesRead More
Share:
Tags
Cite this document
(“Management Development Essay Example | Topics and Well Written Essays - 1250 words”, n.d.)
Retrieved from https://studentshare.org/miscellaneous/1556564-management-development

CHECK THESE SAMPLES OF Management Development

He will change his brand as soon as he realizes that his needs might be catered in a better way by some other brand. This creates the need for efficient planning tools and updated information.
An important aspect here is that the management system should work in accordance with the vision of the organization. It is only one of the reasons for the failure of a system. There are several more causes that shall be investigated.
It shall be investigated as to how strategic management systems assist in identifying the strengths and weaknesses of a company (Hitt 2009). It gives the company an opportunity to make their products and services better for their customers.
Strategic management systems can be defined as the proce...

The new system of regulation for fraud-free corporate reporting has been put to operate as per the Sarbanes-Oxley Act which was passed in 2002 against corporate financial reporters such as self-regulating accountants and organizational accounting departments. Sarbanes-Oxley Act is implementing some of the guidelines under the authorities of Congress and other accounting institutions. But it seems that Sarbanes-Oxley Act, together with other bodies such as Public Company Accounting Oversight Board (PCAOC), Securities and Exchange Commission (SEC), etc are unable to provide justifications for the stoppage of such unscrupulous activities (Engel, Hayes, & Wang, 2005). It had been observed that organizations may somehow avert futur...
6 Pages(1500 words)Coursework

Any child that sets foot into the classroom carries with him/her a myriad of experiences and backgrounds; thus, making it essential to perceive the child in relation to the systems and dynamics that surround him/her. “All areas of development depend on the context of children’s lives—children’s experiences in families, schools, neighborhoods, community organizations, cultural and et...
7 Pages(1750 words)Case Study
sponsored ads
Save Your Time for More Important Things
Let us write or edit the essay on your topic "Management Development" with a personal 20% discount.
GRAB THE BEST PAPER

Let us find you another Essay on topic Management Development for FREE!