Comments (0)
Add to wishlistDelete from wishlist
Cite this document
Summary
There have been numerous theories that have been developed in regards to employee relation. These theories have been a part of our daily lives and it is seen that even though people tend to be following the processes it is…
Download full paperFile format: .doc, available for editing
HIDE THIS PAPERGRAB THE BEST PAPER98.1% of users find it useful 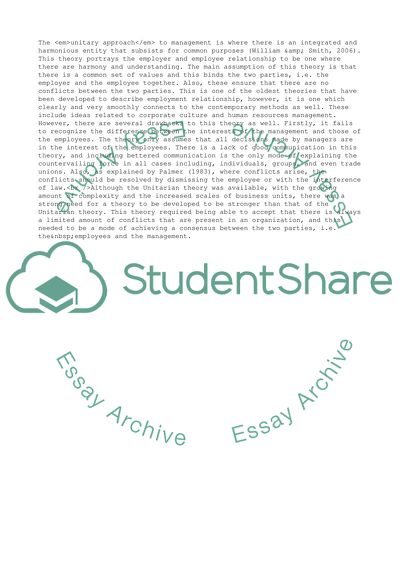 Download file to see previous pages Unitarist and Pluralist in the management of collective employment relationships.
The unitary approach to management is where there is an integrated and harmonious entity that subsists for common purposes (William & Smith, 2006). This theory portrays the employer and employee relationship to be one where there is harmony and understanding. The main assumption of this theory is that there are a common set of values and these bind the two parties, i.e. the employer and the employee together. Also these ensure that there are no conflicts among the two parties. This is one of the oldest theories that have been developed to describe employment relationship however it is one which clearly and very smoothly connects to the contemporary methods as well. These include the ideas related to the corporate culture and human resources management. However there are a number of drawbacks of this theory as well. Firstly, it fails to recognise the difference between the interests of the managements and those of the employees. The theory only assumes that all decisions made by managers is in the interest of the employees. There is a lack of good communication in this theory and including bettered communication is the only mode of explaining the countervailing force in all cases including, individuals, groups and even trade unions. Also as explained by Palmer (1983), where conflicts arise, the conflicts should be resolved by dismissing the employee or with the interference of law.
Although the Unitarian theory was available, with the growing amount of complexity and the increased scales of business units, there was a strong need for a theory to be developed to be stronger in nature than that of the Unitarian theory. This theory required being able to accept that there are always a limited amount of conflicts that are present in an organisation and this needed to be a mode of achieving a consensus among the two parties, i.e. the ...Download file to see next pagesRead More
Share:
Tags
Cite this document
(“What do you consider to be the main differences between a unitarist Essay”, n.d.)
What do you consider to be the main differences between a unitarist Essay. Retrieved from https://studentshare.org/miscellaneous/1556449-what-do-you-consider-to-be-the-main-differences-between-a-unitarist-and-pluralist-approach-to-the-management-of-the-collective-employment-relationship

...﻿How should the collective employment relationship be managed in the context of the contemporary business environment? A great change is occurring in the United Kingdom for collective and individual representation at work. A silent workplace revolution is passing through. Trade unionism has changed or decreased over the years. The sectors of industry like coal, textiles, iron and steel and shipbuilding previously had the trade unions. Now that these have decreased, the significance of the unions has diminished (Taylor, ESRC). Individualisation of wages has reduced the bargaining capacity by unions. Employers now have a greater willingness to tolerate unions. However employers cannot exercise “unquestioned and unilateral power...
11 Pages(2750 words)Case Study

The new system of regulation for fraud-free corporate reporting has been put to operate as per the Sarbanes-Oxley Act which was passed in 2002 against corporate financial reporters such as self-regulating accountants and organizational accounting departments. Sarbanes-Oxley Act is implementing some of the guidelines under the authorities of Congress and other accounting institutions. But it seems that Sarbanes-Oxley Act, together with other bodies such as Public Company Accounting Oversight Board (PCAOC), Securities and Exchange Commission (SEC), etc are unable to provide justifications for the stoppage of such unscrupulous activities (Engel, Hayes, & Wang, 2005). It had been observed that organizations may somehow avert futur...
6 Pages(1500 words)Coursework

The ultimate result of the report indicates the textual features of proper written and spoken language for the understanding of common features for facilitating reading comprehension. The judgment of higher-order language processing is likely to contain linguistic features associated with a sophisticated language. It also indicates avenues the speaker or writer can improve the conditions of linguistics and the overall language.
The characteristics of a defined genre are very necessary are pertinent, as the research study is dependent upon the various species of language and structures of the vocal tract (Simpson, 2004). It is very clear that communication plays an important role in the development of language skills. Furtherm...
9 Pages(2250 words)Coursework
sponsored ads
Save Your Time for More Important Things
Let us write or edit the essay on your topic "What do you consider to be the main differences between a unitarist and pluralist approach to the management of the collective employment relationship" with a personal 20% discount.
GRAB THE BEST PAPER

Let us find you another Essay on topic What do you consider to be the main differences between a unitarist and pluralist approach to the management of the collective employment relationship for FREE!