Comparison in Sound Velocity Variability over Neap and Spring Cycle in Dart and Tamar Estuaries, UK and Its Impacts on Sonar Performances - Essay Example

Comments (0)
Add to wishlistDelete from wishlist
Cite this document
Summary
One of the biggest differences is the level of salinity in the water, so where seawater meets freshwater there is a dramatic change in sound velocity. This information is very important to anyone…
Download full paperFile format: .doc, available for editing
HIDE THIS PAPERGRAB THE BEST PAPER93.7% of users find it useful 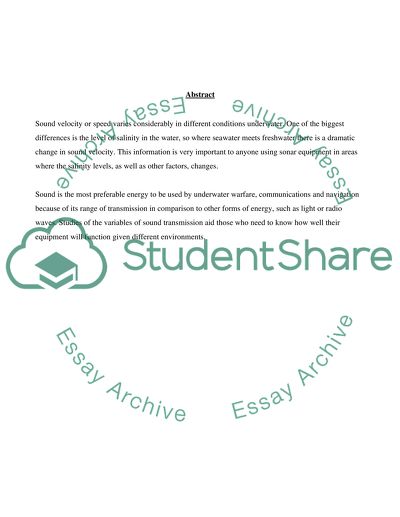 Extract of sample "Comparison in Sound Velocity Variability over Neap and Spring Cycle in Dart and Tamar Estuaries, UK and Its Impacts on Sonar Performances"

Download file to see previous pages Studies of the variables of sound transmission aid those who need to know how well their equipment will function given different environments.
This project entails the planning and execution of an oceanographic survey to determine the differences in sound velocity variables over the neap and spring tide cycles in the Dart and Tamar estuaries, and their impact on sonar-related performances. This study is largely based on research provided by Desiree Batton in conjunction with the Hydrographic Society, The Dart Observatory at the Britannia Royal Naval College and Graham Tattersall of the CEFAS Lowestoft Laboratory, as well as additional research. The tide cycles at the mouths of these two estuaries differ in some factors that influence the movement of sound. This paper plans to show what those factors are and how they affect sonar usage.
The report will present data that was ascertained by using the current appropriate techniques and tools. It will analyze the variability of sound velocity, present the results and make determinations based on those analyses and calculations.
Several determinations will be necessary to conclude this paper, such as the variations in bottom sound velocity as opposed to the variations in surface sound velocity. For instance the calculations for bottom sound velocity will take the higher level of mixing into account, while the calculations for surface sound velocity will need to look at temperature variables more, especially spring tide. Differing types of measuring equipment will be needed to gain the information required. In addition, time of day and the varying points of tidal activity are considerations that will add into the data.
This project is designed to correlate with other projects that focus on sound speed or sound velocity. The need to understand how sound travels through tidal waters, in particular the Dart and Tamar estuaries, is of great significance to ongoing research. The research of A. D. Priestley ...Download file to see next pagesRead More
Share:
Tags
Cite this document
(“Comparison in Sound Velocity Variability over Neap and Spring Cycle in Essay”, n.d.)
Comparison in Sound Velocity Variability over Neap and Spring Cycle in Essay. Retrieved from https://studentshare.org/miscellaneous/1535722-comparison-in-sound-velocity-variability-over-neap-and-spring-cycle-in-dart-and-tamar-estuaries-uk-and-its-impacts-on-sonar-performances

“Comparison in Sound Velocity Variability over Neap and Spring Cycle in Essay”, n.d. https://studentshare.org/miscellaneous/1535722-comparison-in-sound-velocity-variability-over-neap-and-spring-cycle-in-dart-and-tamar-estuaries-uk-and-its-impacts-on-sonar-performances.
Comments (0)
Click to create a comment or rate a document

CHECK THESE SAMPLES OF Comparison in Sound Velocity Variability over Neap and Spring Cycle in Dart and Tamar Estuaries, UK and Its Impacts on Sonar Performances

Picasso’s painting of Tauromachy was completed in 1934 as an etching to display a bullfight. The center of this particular etching displays a bullfight after the bull as been pierced with a spear. The focus of the etching is with the bullhead, which is opened and screaming in pain with the back of the head showing banderillas, or piercing from a spear. To one side of this is a woman’s head, which comes in front of the horse. She has an outstretched arm from the right-hand corner which is holding a handkerchief to throw into the arena. The etching is further accented with the horse’s body garment, which has a hole in the front leg and which is significant with the dressed horses that were used in bullfighting in P...
8 Pages(2000 words)Essay
sponsored ads
Save Your Time for More Important Things
Let us write or edit the essay on your topic "Comparison in Sound Velocity Variability over Neap and Spring Cycle in Dart and Tamar Estuaries, UK and Its Impacts on Sonar Performances" with a personal 20% discount.
GRAB THE BEST PAPER

Let us find you another Essay on topic Comparison in Sound Velocity Variability over Neap and Spring Cycle in Dart and Tamar Estuaries, UK and Its Impacts on Sonar Performances for FREE!