Comments (0)
Add to wishlistDelete from wishlist
Cite this document
Summary
However, with the developments brought about by globalization and technological advance, religious extremists have been empowered in executing their endeavors. Given the rising power of…
Download full paperFile format: .doc, available for editing
HIDE THIS PAPERGRAB THE BEST PAPER91.9% of users find it useful 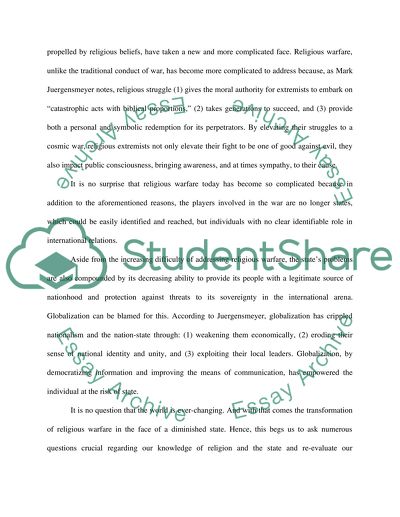 The Rise of Religion and the Demise of the Nation Since time immemorial, numerous wars and conflicts have been fought for the sake of religion.However, with the developments brought about by globalization and technological advance, religious extremists have been empowered in executing their endeavors. Given the rising power of religious groups and their growing aggression towards Western modernity, this begs us to ask, what will become of the nation-state in the face of religious opposition? As this essay will argue, trends in international relations, which indicate the demise of the nation-state’s legitimacy as a source of national identity, will open doors for other mediums such as religion and culture to fill the void for nationalism and further threaten the state.
This struggle is reminiscent of what Samuel Huntington wrote in his book The Clash of Civilization, he notes that in the post-Cold War era, wars and conflicts will be fought not because of economic or ideological reasons, but because of cultural phenomenon brought about by clashes among civilizations. He argues that Western instruments of modernity will create conflicts with the non-Western world due to the isolation and aggression that it will create. With globalization bringing nations and cultures together, non-Western cultures may feel isolated and threatened. In order to protect themselves, and with no apparent formal channel to do so under the nation-state, religion –being inextricably linked and identified with culture, becomes a crucial refuge and a powerful tool to fight back.
However, due to the changes in today’s world – deeper integration between nations and economies, rapid developments in communications and technology (including instruments of war), blurring of national borders, and a growing animosity towards the Western world due to the spread of information among different nations and cultures; conflict, including those propelled by religious beliefs, have taken a new and more complicated face. Religious warfare, unlike the traditional conduct of war, has become more complicated to address because, as Mark Juergensmeyer notes, religious struggle (1) gives the moral authority for extremists to embark on “catastrophic acts with biblical proportions,” (2) takes generations to succeed, and (3) provide both a personal and symbolic redemption for its perpetrators. By elevating their struggles to a cosmic war, religious extremists not only elevate their fight to be one of good against evil, they also impact public consciousness, bringing awareness, and at times sympathy, to their cause.
It is no surprise that religious warfare today has become so complicated because in addition to the aforementioned reasons, the players involved in the war are no longer states, which could be easily identified and reached, but individuals with no clear identifiable role in international relations.
Aside from the increasing difficulty of addressing religious warfare, the state’s problems are also compounded by its decreasing ability to provide its people with a legitimate source of nationhood and protection against threats to its sovereignty in the international arena. Globalization can be blamed for this. According to Juergensmeyer, globalization has crippled nationalism and the nation-state through: (1) weakening them economically, (2) eroding their sense of national identity and unity, and (3) exploiting their local leaders. Globalization, by democratizing information and improving the means of communication, has empowered the individual at the risk of state.
It is no question that the world is ever-changing. And with that comes the transformation of religious warfare in the face of a diminished state. Hence, this begs us to ask numerous questions crucial regarding our knowledge of religion and the state and re-evaluate our knowledge to ensure that the state does not further diminish in the face of globalization and to avoid further destruction caused by religious warfare.
References
Huntington, Samuel. The Clash of Civilizations and the Remaking of World Order. New York: Simon & Schuster. 1996.
Juergensmeyer, Mark. “Holy Orders: Opposition to Modern States.” Harvard
International Review 25. 2004. Read More
Share:
Tags
Cite this document
(“Questions on Global Issues Essay Example | Topics and Well Written Essays - 500 words”, n.d.)
Questions on Global Issues Essay Example | Topics and Well Written Essays - 500 words. Retrieved from https://studentshare.org/miscellaneous/1534989-questions-on-global-issues

CHECK THESE SAMPLES OF Questions on Global Issues

...Running head: Global Revolution Tim Peters, 24th East Drive Corner Lancashire, England. 15th July 1831 Maxwell Chechen, Po box 254-104, Cape Town, South Africa. I hope this letter finds you well Maxwell. I am doing great here in England except for the exhaustion brought about by the long hours of work that is a norm here in Lancashire. Indeed, England is a great country, but unknown to most of you outsiders, the work conditions here are actually terrible. I work in the local textile industry which employs the majority of the people in this neighborhood. The pay is barely sufficient to cater for all our needs. Nevertheless, I sometimes go to work with my two sons even though the factory pays them half of what they pay adults...
1 Pages(250 words)Essay

...Human Security Analysis in Hurricane Katrina al Affiliation Human Security Analysis in Hurricane Katrina Human security isa topic that has garnered a lot of attention within the public domain as different security analysts seek to understand its meaning. In definition, human security refers to the protection of the public from any disaster that risks the safety of their lives. However, it is apparent that different theoretical frameworks provide different perspectives of human security hence leading to a great controversy in the issue. However, there is a concession that the government is responsible for safeguarding human security within its area of jurisdiction as part of their major responsibilities. In the Hurricane Katrina, one...
4 Pages(1000 words)Essay

... Sweatshops in developing countries provide most products imported in the United s including shoes, clothing, rugs and toys. However, it is rumored that many children are subjected to child labor in the sweatshops. It is estimated that about two hundred and fifty thousand children between the age of four and thirteen work in developing countries. People should not stop the purchase of clothes imported from developing countries; instead laws should be formed and implemented to end the sweatshops. Public full disclosure should be implemented. The companies must disclose how and where products are made and also the treatment and amounts paid to the workers. The disclosure should also be backed by the independent monitoring of pay... Sweatshops...
2 Pages(500 words)Essay

In spite of their discouraging entrance in the steel industry, Nucor Corporation has become a benchmark for both the U.S. steel industry and the U.S. industry in general. It is one of the fastest-growing and most resourceful steel producers around the globe. Regardless of the decreasing demand for steel, Nucor’s expansion has been exceptional; the company is among the top producers of steel in the U.S. Without a Research and Development department, Nucor has constantly accomplished techno...
7 Pages(1750 words)Case Study
sponsored ads
Save Your Time for More Important Things
Let us write or edit the essay on your topic "Questions on Global Issues" with a personal 20% discount.
GRAB THE BEST PAPER

Let us find you another Essay on topic Questions on Global Issues for FREE!