Comments (0)
Add to wishlistDelete from wishlist
Cite this document
Summary
Type 2 diabetes mellitus (DM) results from a progressive insulin secretion deficiency on the background of insulin resistance, and it is often associated with severe microvascular (retinopathy, nephropathy, and neuropathy) and cardiovascular complications…
Download full paperFile format: .doc, available for editing
HIDE THIS PAPERGRAB THE BEST PAPER91.8% of users find it useful 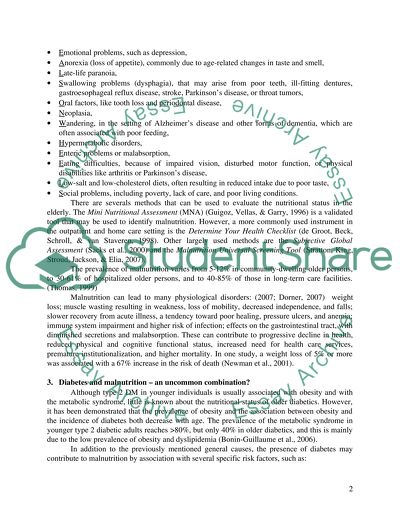 Download file to see previous pages The prevalence of type 2 DM has nearly doubled over the past 25 years, with certain groups - native Americans, Hispanics, and African-Americans - at particularly high risk of developing the disease (HORNICK & ARON, 2008).
Diabetes is the fifth leading cause of death by disease in the United States, killing approximately 225,000 people each year. The direct cost of diabetes is $92 billion a year, representing 11 percent of total health care expenditures in the U.S. (Hayashi, 2007).
At least 20% of persons 65 years of age or above and 26% of long-term care facility residents have diabetes, and the annual cost of caring for the latter is estimated at $6 billion (American Diabetes Association, 2008) (Pandya, 2003). Older diabetics are two to three times more likely to need hospital admission than their non-diabetic counterparts (Damsgaard, Froland, & Green, 1987). An analysis of the 1999-2004 National Health and Nutrition Examination Survey (NHANES), including subjects over 65 y.o. and type 2 DM, found an alarmingly high prevalence of comorbid conditions in this population: 31.5% had renal insufficiency, 20.2% had a history of myocardial infarction, and 17.9% had heart failure (Suh, Kim, Choi, & Plauschinat, 2007).
Physiologic and pathologic changes of ageing may concur to induce malnutrition. After the age of 65, weight loss occurs at rate of up to 0.65 kg/year (Lehmann & Bassey, 1996), although there is substantial variation between individuals. A decline in muscle mass begins from 30 to 40 years of age, and continues into advanced old age (Elia, 1992).
Failure to thrive in the elderly was described as "a syndrome manifested by weight loss greater than 5% of baseline, decreased appetite, poor nutrition, and inactivity, often accompanied by dehydration, depressive symptoms, impaired immune function, and low cholesterol levels." (Lonergan, 1991) It is estimated that 15 to 50 percent of Americans over the age of 65 consume too few calories, protein or essential vitamins and minerals for good health. (2007)
The various causes of malnutrition can be summarized in a useful mnemonic "Meals On Wheels"(2007):
Medications, including digoxin, diuretics, anti-inflammatory agents, antacids, H2-blockers, antidepressants, anticonvulsants etc, which may induce side effects like anorexia, nausea, vomiting, diarrhea, cognitive disturbance and increased metabolism,
Emotional problems, such as depression,
Anorexia (loss of appetite), commonly due to age-related changes in taste and smell,
Late-life paranoia,
Swallowing problems (dysphagia), that may arise from poor teeth, ill-fitting dentures, gastroesophageal reflux disease, stroke, Parkinson's disease, or throat tumors,
Oral factors, like tooth loss and periodontal disease,
Neoplasia,
Wandering, in the setting of Alzheimer's disease and other forms of dementia, which are often associated with poor feeding,
Hypermetabolic disorders,
Enteric problems or malabsorption,
Eating difficulties, because of impaired vision, disturbed motor function, or physical disabilities like arthritis or Parkinson's disease,
Low-salt and low-cholesterol diets, often resulting in reduced intake due to poor taste,
Social problems, including poverty, lack of care, and poor living conditions.
There are severals ...Download file to see next pagesRead More
Share:
Tags
Cite this document
(“Is nutrition intervention an essential component to the management of Essay”, n.d.)
Is nutrition intervention an essential component to the management of Essay. Retrieved from https://studentshare.org/miscellaneous/1532762-is-nutrition-intervention-an-essential-component-to-the-management-of-diabetes-in-the-elderly

“Is Nutrition Intervention an Essential Component to the Management of Essay”, n.d. https://studentshare.org/miscellaneous/1532762-is-nutrition-intervention-an-essential-component-to-the-management-of-diabetes-in-the-elderly.
Comments (0)
Click to create a comment or rate a document

In this study, my case history is presented. I am 41 years of age and trying very hard to lose weight. There are no known diseases in my family that I know of and the only thing that I suffer from is severe constipation. Constipation may be a conti...

7 Pages(1750 words)Assignment
sponsored ads
Save Your Time for More Important Things
Let us write or edit the essay on your topic "Is nutrition intervention an essential component to the management of diabetes in the ELDERLY" with a personal 20% discount.
GRAB THE BEST PAPER

Let us find you another Essay on topic Is nutrition intervention an essential component to the management of diabetes in the ELDERLY for FREE!