Comments (0)
Add to wishlistDelete from wishlist
Cite this document
Summary
For the women who have been abused in the home by the men with whom they live, the past three decades have seen both radical change and No change at all"(Dobash&Dobash,1992). Critically assess this claim with reference to both state intervention and the feminist response to domestic violence in Minority Ethnic Communities in the UK.
…
Download full paperFile format: .doc, available for editing
HIDE THIS PAPERGRAB THE BEST PAPER91.1% of users find it useful 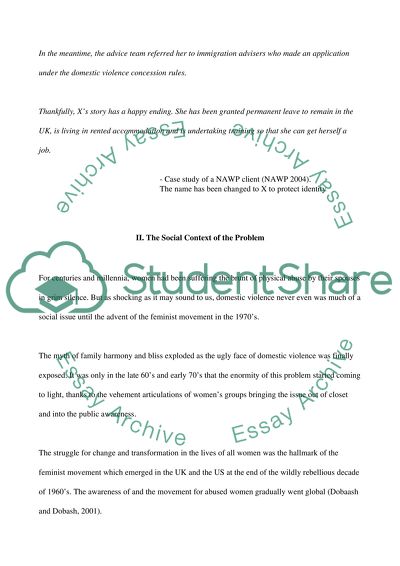 Download file to see previous pages X was too scared to go back, she was scared her husband and his family would kill her.
After hearing about Newham Asian Women's Project from a friend, X came to see us at the Advice Service. We tried to find a refuge space for X but none was available, particularly as X did not have access to public funds in the UK due to the nature of her spousal visa.
For centuries and millennia, women had been suffering the brunt of physical abuse by their spouses in grim silence. But as shocking as it may sound to us, domestic violence never even was much of a social issue until the advent of the feminist movement in the 1970's.
The myth of family harmony and bliss exploded as the ugly face of domestic violence was finally exposed. It was only in the late 60's and early 70's that the enormity of this problem started coming to light, thanks to the vehement articulations of women's groups bringing the issue out of closet and into the public awareness.
The struggle for change and transformation in the lives of all women was the hallmark of the feminist movement which emerged in the UK and the US at the end of the wildly rebellious decade of 1960's. The awareness of and the movement for abused women gradually went global (Dobaash and Dobash, 2001).
On the basis of this spreading awareness of women's abuse in home settings, feminist activists sought social and political change, urging the state to intervene in order to provide support and relief for the abused women.
Since then a lot of progress has been made that militated against domestic violence. As can be surmised from the case study cited above, there is presently a very impressive degree of support available for victims of domestic abuse in the UK. On a more basic level, however, the prevalence of domestic violence even within the Western countries can be seen to be raging unabated.
On the one hand, there have been many radical changes beginning with the increasing recognition and acknowledgement of this problem over the past couple of decades, this awareness in itself being a phenomenon of fundamental importance in tacking the issue. The fact that it is becoming increasingly unacceptable for a man, in the common ethos of the society, to use physical or sexual violence against his female partner, is in itself an impressive achievement. However, on the other hand, in spite of the positively changing ethos and perceptions, a favourable justice system, policy intervention, and the tremendous support provided by social service and voluntary agencies, the actual extent of the problem continues to be a major concern for feminists, human rights activists, and all responsible ...Download file to see next pagesRead More
Share:
Tags
Cite this document
(“Gender violence and human rights Essay Example | Topics and Well Written Essays - 3000 words”, n.d.)
Gender violence and human rights Essay Example | Topics and Well Written Essays - 3000 words. Retrieved from https://studentshare.org/miscellaneous/1532454-gender-violence-and-human-rights

CHECK THESE SAMPLES OF Gender violence and human rights

The idea that masculinity is synonymous with power transcends the times.5 At least from a purely feminist perspective power over women and children has always been essential for maintaining the gender gap in which men are superior to women.6 Anthony Whitehead writes that:
This concept of masculinity goes back to Victorian times and rapidly developed into an ideology that recognized “unity and power of men over women” as the hierarchal structure within “patriarchal social relations.”8
Masculinity and manhood encapsulate an ideology that goes beyond other characteristics of identity such as race, class, and sexuality.9 Heroism, for instance, is aligned to masculinity. The hero has been portrayed thr...

The painting...
7 Pages(1750 words)Coursework
sponsored ads
Save Your Time for More Important Things
Let us write or edit the essay on your topic "Gender violence and human rights" with a personal 20% discount.
GRAB THE BEST PAPER

Let us find you another Essay on topic Gender violence and human rights for FREE!