Comments (0)
Add to wishlistDelete from wishlist
Cite this document
Summary
Code of ethics of a firm provides important guidelines for professional conduct. It clearly outlines what the company believes in and how it expects its employees to believe in the same. The company mentions its values, principles, goals and expectation of professional behavior…
Download full paperFile format: .doc, available for editing
HIDE THIS PAPERGRAB THE BEST PAPER94.4% of users find it useful 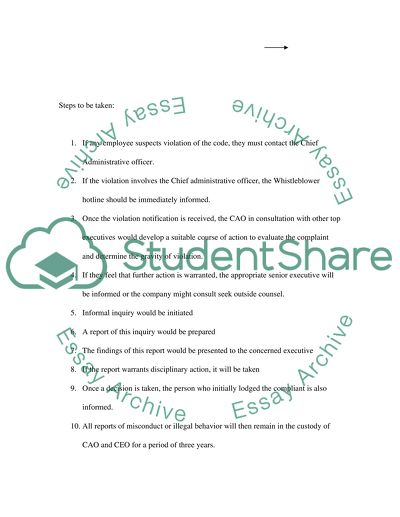 Extract of sample "System of Inquiry"

System of inquiry of ethics of a firm provides important guidelines for professional conduct. It clearly outlines what the company believes in and how it expects its employees to believe in the same. The company mentions its values, principles, goals and expectation of professional behavior. This code of ethics can be used to develop a system of inquiry. This model is used when an employee is found to have transgressed in some manner. The system of inquiry will be based on the following model that has been developed keeping in view a certain code of ethics. The model will loosely resemble the diagram below. It is further explained in greater detail below.
Steps to be taken:
1. If any employee suspects violation of the code, they must contact the Chief Administrative officer.
2. If the violation involves the Chief administrative officer, the Whistleblower hotline should be immediately informed.
3. Once the violation notification is received, the CAO in consultation with other top executives would develop a suitable course of action to evaluate the complaint and determine the gravity of violation.
4. If they feel that further action is warranted, the appropriate senior executive will be informed or the company might consult seek outside counsel.
5. Informal inquiry would be initiated
6. A report of this inquiry would be prepared
7. The findings of this report would be presented to the concerned executive
8. If the report warrants disciplinary action, it will be taken
9. Once a decision is taken, the person who initially lodged the compliant is also informed.
10. All reports of misconduct or illegal behavior will then remain in the custody of CAO and CEO for a period of three years.
These are the important components of system of inquiry for my company that believes in accountability and has mentioned it repeatedly in the code of ethics. This system of inquiry is based on the various clauses within the code of ethics. The firm makes it clear that this system would be followed in case a complaint is lodged against any employee. Read More
Share:
Tags
Cite this document
(“System of Inquiry Essay Example | Topics and Well Written Essays - 500 words”, n.d.)
Retrieved de https://studentshare.org/miscellaneous/1531650-system-of-inquiry

CHECK THESE SAMPLES OF System of Inquiry

In order to compare the welfare system of the three proposed countries, it is important to first develop a comparative method that would guide in comparing the three states. For the purpose of this paper, a binary comparison would be conducted. The implicit comparison would deal with Britain while the explicit comparison would explore the USA and Canada. Thereby a small N’ study would be used, that is, of three countries.
The three countries selected to share a similarity in the form that these countries are a welfare state. This is when welfare is mainly funded by the state. While the USA and Canada focus on the liberal welfare state, the welfare state of the UK is not quite defined.
The comparison of the welfare...
8 Pages(2000 words)Term Paper
sponsored ads
Save Your Time for More Important Things
Let us write or edit the essay on your topic "System of Inquiry" with a personal 20% discount.
GRAB THE BEST PAPER

Let us find you another Essay on topic System of Inquiry for FREE!