Comments (0)
Add to wishlistDelete from wishlist
Cite this document
Summary
The elderly population is growing at an exponential rate, and these individuals experience an increased quality of life through self care. The purpose of this research is to provide contextual definitions of key concepts and apply them to the general elderly population as well as the Taiwanese elderly, demonstrate the efficacy of phenomenological research methodology, and provide a framework for conducting studies that will facilitate the self care of chronically-ill elderly patients as a supplement to proper nursing and medical therapies.
…
Download full paperFile format: .doc, available for editing
HIDE THIS PAPERGRAB THE BEST PAPER91.7% of users find it useful 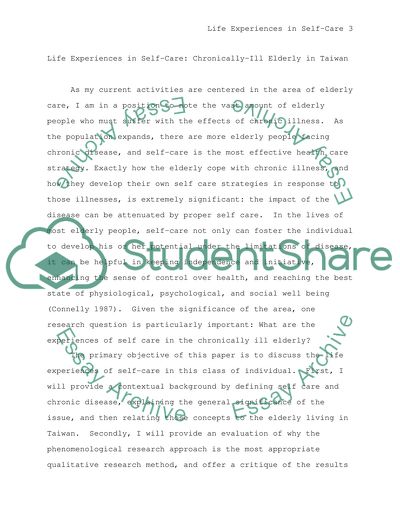 Download file to see previous pages Exactly how the elderly cope with chronic illness, and how they develop their own self care strategies in response to those illnesses, is extremely significant: the impact of the disease can be attenuated by proper self care. In the lives of most elderly people, self-care not only can foster the individual to develop his or her potential under the limitations of disease, it can be helpful in keeping independence and initiative, enhancing the sense of control over health, and reaching the best state of physiological, psychological, and social well being (Connelly 1987). Given the significance of the area, one research question is particularly important: What are the experiences of self care in the chronically ill elderly
The primary objective of this paper is to discuss the life experiences of self-care in this class of individual. First, I will provide a contextual background by defining self care and chronic disease, explaining the general significance of the issue, and then relating those concepts to the elderly living in Taiwan. Secondly, I will provide an evaluation of why the phenomenological research approach is the most appropriate qualitative research method, and offer a critique of the results of other studies on the subject. Finally, I will describe the steps that could be taken to conduct a qualitative study and propose why these steps are appropriate in answering the research question.
Contextual Background
Self Care. The concept of self care developments has been an area of concern in various academic departments such as medicine, nursing, psychology, sociology, and health education (Gantz, 1990). Each academic discipline has focused upon different aspects of self-care from its own perspective of what is important or significant. The following are viewpoints from medical, health education, and nursing perspectives are more directly related to nursing care, and further introduce the concept of self-care.
In the field of medicine, Levin (1976) demonstrates it has long been believed that self-care is a process which operates in favor of one's health. Self care promotes health while it prevents, discovers, and treats diseases. It is considered a vital part of preliminary care in the nursing system. Vickery (1986) believes that self-care is constructive behavior and an individual's way to pay attention to medical issues. In other words, self care is a behavioral expression that focuses on medical problems or physical symptoms; and it also displaces nursing care obligations. Behavioural changes of patients are, for the most part, concentrated on following medical advice (Gantz, 1990).
Health education coordinates individuals' regulative and corrective behaviors by making use of the education process and behavior-change strategies (Parcel, Bartlett, and Bruhn, 1986). For example, under applied stress or self-adjusting skills and self-handling behavior, correction skills help change living modes (Gantz, 1990), promote ...Download file to see next pagesRead More
Share:
Tags
Cite this document
(“Revising this qualitative research paper Essay Example | Topics and Well Written Essays - 3500 words”, n.d.)
Revising this qualitative research paper Essay Example | Topics and Well Written Essays - 3500 words. Retrieved from https://studentshare.org/miscellaneous/1530483-revising-this-qualitative-research-paper

CHECK THESE SAMPLES OF Revising this qualitative research paper

The use of descriptive statistics in this study may not really be justified. The basic purpose of using descriptive
statistics and deriving the central tendency of a distribution is in order to deal with large volumes of data (Trochim, 2002). It offers a means to simplify data where there may be several quantitative measures or a lar...
10 Pages(2500 words)Literature review

13 Pages(3250 words)Assignment
sponsored ads
Save Your Time for More Important Things
Let us write or edit the essay on your topic "Revising this qualitative research paper" with a personal 20% discount.
GRAB THE BEST PAPER

Let us find you another Essay on topic Revising this qualitative research paper for FREE!