Comments (0)
Add to wishlistDelete from wishlist
Cite this document
Summary
In his essay "Merit: Why Do We Value It" Louis Pojman argues the case that merit should be something that is deserved through the individualized hard work and determination of those that have accomplished what was not easy for them. Pojman discusses the falsity of the common perception that merit is always justly deserved…
Download full paperFile format: .doc, available for editing
HIDE THIS PAPERGRAB THE BEST PAPER98.3% of users find it useful 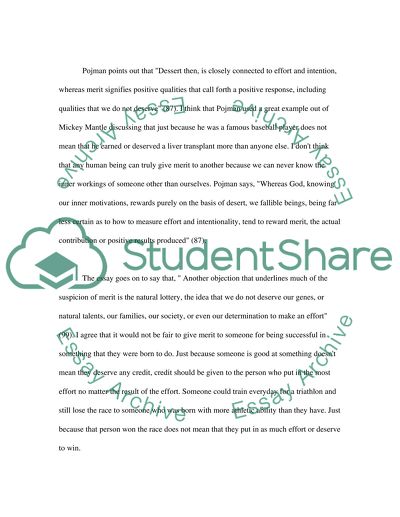 Download file to see previous pages I agree with Pojman's thoughts and see the fault with society's focus on only the end result and generalizing merit by not taking into account an individual's struggles and strengths
I agree when Pojman points out that "nondeserved merit can be features that the natural lottery has distributed such as ones basic intelligence, personality type, skin color, good looks, and physical endowments" (86). I also think that merit comes more easily to those who are properly equipped to achieve it. For example I look at celebrities or wealthy aristocrats who have been granted merit for their large contributions to charity. These individuals may receive more praise and admiration than an everyday working class citizen who gives their last dollar to a homeless man on the street. I believe that the everyday citizen deserves just as much merit as the celebrity or wealthy aristocrat because the amount of money that one gives is not what warrants merit, but the generosity of the individual depending on their own personal income and what they can afford.
Pojman points out that "Dessert then, is closely connected to effort and intention, whereas merit signifies positive qualities that call forth a positive response, including qualities that we do not deserve" (87). I think that Pojman used a great example out of Mickey Mantle discussing that just because he was a famous baseball player does not mean that he earned or deserved a liver transplant more than anyone else. I don't think that any human being can truly give merit to another because we can never know the inner workings of someone other than ourselves. Pojman says, "Whereas God, knowing our inner motivations, rewards purely on the basis of desert, we fallible beings, being far less certain as to how to measure effort and intentionality, tend to reward merit, the actual contribution or positive results produced" (87).
The essay goes on to say that, " Another objection that underlines much of the suspicion of merit is the natural lottery, the idea that we do not deserve our genes, or natural talents, our families, our society, or even our determination to make an effort" (99). I agree that it would not be fair to give merit to someone for being successful in something that they were born to do. Just because someone is good at something doesn't mean they deserve any credit, credit should be given to the person who put in the most effort no matter the result of the effort. Someone could train everyday for a triathlon and still lose the race to someone who was born with more athletic ability than they have. Just because that person won the race does not mean that they put in as much effort or deserve to win.
This belief that "effort is the decisive criterion of merit" (91), means that just because something comes easily for one person does not mean it is easy for everyone. Pojman says, "We are stewards of our talents and are judged on the basis of what we can do with them. Those who use their talents wisely and industriously deserve to be rewarded, whereas those who neglect their talents deserve reprobation" (90). I also think that if you acknowledge your ability, and push yourself in it, becoming the best that you possibly can, then merit is definitely deserved for your effort. I like the story Pojman told of the carpenter building the chair in the factory of the entrepreneur. The entrepreneur is talented in finding ways to make money ...Download file to see next pagesRead More
Share:
Tags
Cite this document
(“Philosophy of Human Conduct Essay Example | Topics and Well Written Essays - 750 words”, n.d.)
Philosophy of Human Conduct Essay Example | Topics and Well Written Essays - 750 words. Retrieved from https://studentshare.org/miscellaneous/1529133-philosophy-of-human-conduct

CHECK THESE SAMPLES OF Philosophy of Human Conduct

Jean Jacques Rousseau (1712 to 1778) was a Genevois philosopher. Besides that, he was a writer and a composer of romanticism. His philosophies were very influential so much so that they were considered to have triggered the French...
7 Pages(1750 words)Coursework
sponsored ads
Save Your Time for More Important Things
Let us write or edit the essay on your topic "Philosophy of Human Conduct" with a personal 20% discount.
GRAB THE BEST PAPER

Let us find you another Essay on topic Philosophy of Human Conduct for FREE!