Comments (0)
Add to wishlistDelete from wishlist
Cite this document
Summary
Leadership in simple terms means an ability to lead others around. Leadership qualities are not just an asset for a manager, but it helps even the junior-most member of a team. It indicates towards his/ her quality of getting the work done…
Download full paperFile format: .doc, available for editing
HIDE THIS PAPERGRAB THE BEST PAPER98.8% of users find it useful 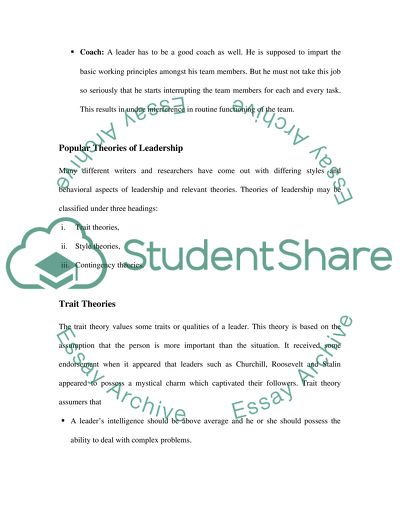 Download file to see previous pages Terry (1994) says that competence for a managerial job is the product of both inherited and acquired qualities. Therefore the team leader has to be a good learner, so that he can capitalize on the stronger points of the team while trying to minimize the effects of weaker points. Pascale (1990) wrote that "managers do things right, while leaders do the right thing," A leader is supposed to be;

Negotiator: The negotiating skills are the one's which distinctly differentiate a leader from other members. While stuck up in a tricky situation a leader uses his skills to convince the concerned people, tries to extract reasonable benefits for his team mates and negotiates a better deal from suppliers while weighing the outcomes of different alternatives.

Coach: A leader has to be a good coach as well. He is supposed to impart the basic working principles amongst his team members. But he must not take this job so seriously that he starts interrupting the team members for each and every task. This results in undue interference in routine functioning of the team.
Popular Theories of Leadership
Many different writers and researchers have come out with differing styles and behavioral aspects of leadership and relevant theories. Theories of leadership may be classified under three headings:
i. Trait theories,
ii. Style theories,
iii. Contingency theories.
Trait Theories
The trait theory values some traits or qualities of a leader. This theory is based on the assumption that the person is more important than the situation. It received some endorsement when it appeared that leaders such as Churchill, Roosevelt and Stalin appeared to possess a mystical charm which captivated their followers. Trait theory assumers that
A leader's intelligence should be above average and he or she should possess the ability to deal with complex problems.
The leader should have the ability and initiative to see and deal with complex problems.
Leaders are usually very self-confident and competent at their job.
Leaders should have the ability to see problems in the wider context. This is known as the 'helicopter factor'.
Trait theory has since attracted considerable criticism, as it places the individual's traits before the theories of management. But over the years history is replete with examples which indicate that such a theory has indeed worked wonders for the oraganisation or the country.
Style Theories
Style theories are based on the assumption that employees will work harder for managers who adopt certain styles of leadership. The following four styles were identified by Huneryager and Heckman in 1967:
The dictatorial style: The manager tells his or her subordinates what to do, with the implied threat that they will be punished if they do not obey orders. This style is not widely used in industry and commerce.
The autocratic style: Decision making is controlled by the leader, and participation by subordinates is not encouraged. Such a leader takes autocratic decisions based on his understanding of the situation.
The democratic style: Such a leader believes in adopting an approach in which the subordinates are also consulted while taking some key decisions. Decision making is shared by the subordinates as well. For this to be really effective, the subordinates must be prepared to participate.
The laissez faire style: Such an approach is said to be 'take it ...Download file to see next pagesRead More
Share:
Tags
Cite this document
(“What makes a Good Leader Popular Theories of Leadership Essay”, n.d.)
Retrieved from https://studentshare.org/miscellaneous/1525600-what-makes-a-good-leader

“What Makes a Good Leader Popular Theories of Leadership Essay”, n.d. https://studentshare.org/miscellaneous/1525600-what-makes-a-good-leader.
Comments (0)
Click to create a comment or rate a document

...? Organisational Behaviour What makes a good leader? Table of Contents Introduction 3 Methods 3 Findings 3 Discussion 6 Conclusion 8 References Appendices Word Count: 1500 words (Excluding references and appendices) Introduction: Leadership has been defined by many people in different ways and from different perspectives. In reality, leadership is not a phenomenon or a concept that can be precisely defined or theorized because, not only leadership has been explained and defined in different ways, the way leaders have been emerging in different situations has also been changing continuously with time. In contemporary...
6 Pages(1500 words)Essay

...? Leadership Theories Part One Great Man Theory of Leadership Great man theory is an idea that has its roots way back in the 19th century where it was explained as the impact of great man on decision making of highly important aspects. In accordance with this theory, it is believed that leaders are born with innate qualities, they cannot be made. Furthermore, the theory also suggests that a person is born as a leader or as a normal human being. The born leaders are gifted with qualities, characteristics and charisma of a leader. They will...
3 Pages(750 words)Research Paper

...in any organization especially where the leader is very firm. Being able to manage conflict and create a balance between differing interests makes an advocate a good leader. Conclusion Leadership is the ability to influence others towards accomplishment of a set goal. It is very important in any organization aspiring to be successful and competitive. Leaders apply different styles while leading and the type of leadership determines the amount of following one gets and how goals are accomplished. A leader can be an idealist, diplomat, achiever, innovator or advocate. Advocacy is mostly used in the social...
6 Pages(1500 words)Research Paper

...and they seek to attack any problem or accept any challenge with the support of each other and more importantly, the guidance of the team leader! The history of leadership can be traced back to two phases of theories, the classic theories (before 1938) and the contemporary theories (after 1938). A leader plays a very important role in binding a team together and guiding them through the phases of problems and solving them, as well. A goodleader is one, who can maintain his poise and dignity, level-headedness and ...
7 Pages(1750 words)Essay

...to resolve problems in such a way that they are prevented in the future (Reh, 2006). If each problem is tackled following this pattern, an unsuccessful business can surely transform into a successful one. A good leader is expected to have certain qualities that benefit the organization directly or indirectly. Integrity is an important quality of a leader - the inner values and the outward actions are the same, that is, there is no hypocrisy involved. This will result in honest dealings that will augment the goodwill of a company, making it popular. A leader needs to be dedicated to his company; his passion and commitment to the company...
4 Pages(1000 words)Essay

What Makes a Good Team

...Running Head: Building a Good Team What Makes a Good Team [Please Insert Here] of Department, Oct 2009 Case Outline: You have just been part of a merger. You have each been chosen to head up your department and merge the two groups into a self-directed work team. Work with each other to lay out a plan describing how you will develop a new team within your department or departments. It is natural that there will be some confrontations between people. Look at the stages of team development and use that knowledge to work with the team. It is recognized that some employees will refuse to be part of the team. In fact, the new ownership expects that there will be some who lose their jobs due...
3 Pages(750 words)Essay

...﻿A Good Leader A famous comedian once joked, “Life is full of misery, loneliness, and suffering - and it's all over much too soon.” While I don’t necessarily believe my life is full of misery, I definitely think it’s important to make the most of it, because it’s over too soon. I strive to live my life with passion and create meaning and inspiration out of all my days. It’s also this feeling that I hope is infectious to those around me, particularly my friends. I realize that what those closest to you think of you is an important reflection of who you are, so I consider my friend’s perceptions of me with great care. My friends describe me as a person who has capability in...
2 Pages(500 words)Essay

...Leadership Theories Leadership Theories This paper will discuss many leadership theories and in the end the most effective leadership theory will be selected. Trait Theory Trait theory argues that leadership traits are innate and people with certain innate characteristics can become good leaders. According to this theory, people who are successful leaders are born to be leaders. Behavioral Style Theory Behavior style theory suggests that...
1 Pages(250 words)Essay

...Professor Robert House developed the path-goal theory of leadership (Basu, 2014). According to this leadership theory, leadership style impacts employees’ performance and job satisfaction. Successful leaders establish goals and lay out clear path in front of employees so that they may be able to achieve their goals. Leaders also play a role in clearing obstacles and providing employees with incentives for milestone achievement. Leaders should support employees to improve their confidence, instruct them on ambiguous tasks, and demand from them when they look unmotivated. This requires constant and...
2 Pages(500 words)Article

...A Good Leader: Abraham Lincoln The 16th president of America, the life of Abraham Lincoln provides insights into leadership. Though he exuded leadership skills from an early age, it was his career life and presidency that brought out the best of this. This paper evaluates his people-centeredness, personal character, objective endeavor and communication skills to brand him a good leader. Introduction Born on February 12, 1809, Abraham Lincoln is among the most admired presidents of America. He grew up in a poor family in Indiana and Kentucky. His determination could be traced down to his childhood as he only attended school for one year...
4 Pages(1000 words)Research Paper
sponsored ads
Save Your Time for More Important Things
Let us write or edit the essay on your topic "What makes a Good Leader Popular Theories of Leadership" with a personal 20% discount.
GRAB THE BEST PAPER

Let us find you another Essay on topic What makes a Good Leader Popular Theories of Leadership for FREE!