Comments (0)
Add to wishlistDelete from wishlist
Cite this document
Summary
When BMW took over Mini plant, there was scepticism about their intention. After the company long history of being identified with British and its culture. However, the BMW was determined to change things around and revamp the company that was initially with zero growth and low sales…
Download full paperFile format: .doc, available for editing
HIDE THIS PAPERGRAB THE BEST PAPER98.2% of users find it useful 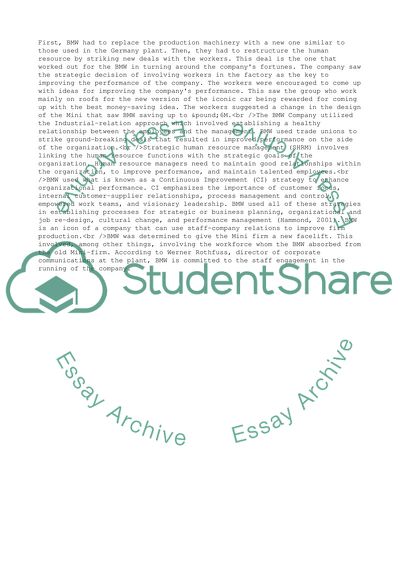 Download file to see previous pages This deal is the one that really worked out for the BMW in turning around the company fortunes. The company saw the strategic decision of involving workers in the factory as the key in improving the performance of the company. The workers were encouraged to come up with ideas of improving the company performance. This saw the group, who work mainly on roofs for the new version of the iconic car being rewarded for coming up with the best money-saving idea. The workers suggested a change in the design of the Mini that saw BMW saving up to 6M.
The BMW Company utilised the Industrial relation approach which involved establishing healthy relationship between the employees and the management. BMW used trade union to strike ground breaking deals that resulted in improved performance on the side of the organisation.
It is my sincerely advice to BMW company to use the principle of industrial relation as it prepare to consolidate its production and cost reduction stage this would facilitate smooth implementation of its future plans.
Strategic human resource management (SHRM) involves linking the human resource functions with the strategic goals of the organisation. Human resource managers need to maintain good relationships within the organisation so as to improve performance and maintain talented employees.
BMW used what is known as Continuous Improvement (CI) strategy to enhance organisational performance. CI emphasise the importance of customer focus, internal customer-supplier relationships, process management and control, empowered work teams and visionary leadership. BMW used all of these strategies in establishing processes for strategic or business planning, organisational and job re-design, cultural change and performance management (Hammond, 2001). BMW is an icon of a company that can use staff-company relations to improve firm production.
BMW was determining to give the Mini firm a new face lift. This involved among other things involving the workforce whom the BMW absorbed from the old Mini firm. According to Werner Rothfuss, director of corporate communications at the plant, BMW is committed to the staff engagement in the running of the company.
The BMW developed good staff- management relations. This is seen where the company engage the union in the dialogue so as to strike the new deals. Many Companies would shy away from this kind of engagement. However BMW believe that in order to succeed it has to pay whatever the price so as to improve the relationship with its employees. As the report exemplify, "...Union acquiescence was bought by promising a minimum bonus of 130, even if targets are missed, and one of the largest wage rises in the industry." (BMW Report). The organisational skills in communicating these changes the best way possible was mandatory in order to avoid workers unrest or resentment. This seems to be the area of expertise for MBW. The BMW was able to convince the workforce to strike a new working deal with workers union. The BMW hammered a new pay deal that reduced the evening entertainment hours for workers and make them more involved and creative in revamping the company. This way the company was able to cut cost and harness creativity on the part of the employees. BMW believe that 'Employees can make a difference' (BMW Report)
Another ...Download file to see next pagesRead More
Share:
Tags
Cite this document
(“Comparative & International HRM Essay Example | Topics and Well Written Essays - 1500 words”, n.d.)
Comparative & International HRM Essay Example | Topics and Well Written Essays - 1500 words. Retrieved from https://studentshare.org/miscellaneous/1507502-comparative-international-hrm

... sense power consumption and power quality. A modest sheet of paper, 50,000 thinner than human hair, when stacked, nets a material 500 times stronger than steel and is changing the way airplanes, automobiles and electronics are made (Alpern, 2009). International Technological collaborations are taking place in the form of strategic alliances, joint ventures and intimate supplier-producer relationships. Such collaborations include activities such as joint development agreements, technology sharing and R&D contracts amongst others (Rycroft, 2002). ICT has pervaded every aspect of business and today the value chain depends on the use of technology to link the customers and suppliers. In the current dynamic and global markets, technology...
7 Pages(1750 words)Coursework
sponsored ads
Save Your Time for More Important Things
Let us write or edit the essay on your topic "Comparative & International HRM" with a personal 20% discount.
GRAB THE BEST PAPER

Let us find you another Essay on topic Comparative & International HRM for FREE!