Comments (0)
Add to wishlistDelete from wishlist
Cite this document
Summary
Large business houses are keen these days in nurturing Diversity programs. This is mainly to create an Inclusive work environment which is a good organizational culture per se. Moreover, Diversity programs enable compliance with law and the policy of the Nation…
Download full paperFile format: .doc, available for editing
HIDE THIS PAPERGRAB THE BEST PAPER95.1% of users find it useful 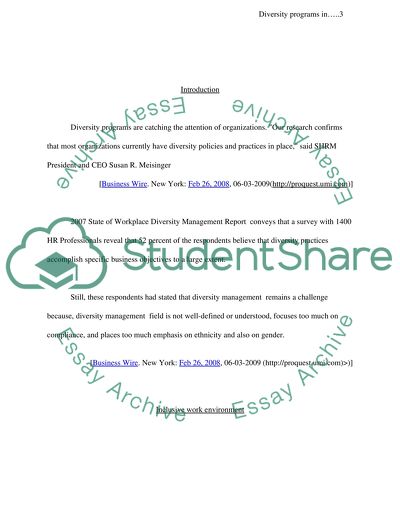 Extract of sample "Managing in an Inclusive Environment Diversity"

Download file to see previous pages Meisinger
2007 State of Workplace Diversity Management Report conveys that a survey with 1400 HR Professionals reveal that 52 percent of the respondents believe that diversity practices accomplish specific business objectives to a large extent.
Still, these respondents had stated that diversity management remains a challenge because, diversity management field is not well-defined or understood, focuses too much on compliance, and places too much emphasis on ethnicity and also on gender.
Creating an Inclusive work environment pays. By bringing about diversity programs an organization can create such environment. There are at least 19 business houses, which have taken seriously and brought in enviable diversity programs.
These efforts include such interventions like giving women of color access to variety of support networks, extending leadership development programs to minority groups and diversity workshops to managers
Chubb Group of Insurance Companies have offered a comprehensive diversity initiative called 'Reach Up, Reach Out, Reach Down', in which high-potential employees of color receive management training and development opportunities. Almost a quarter of female employees who took advantage of management training last year were women of color.
Compliance is no doubt an important factor. ...
Competitive Advantage
Experts are of opinion that there are valuable competitive advantage in employing diverse work groups and they offer seven good reasons why an organisation should have diverse workforce :
1. It is the right thing to do, both ethically and morally.
2. A diversity helps complying with the laws regarding issues of discrimination.
3. Having diversity in a company opens up marketing opportunities, because prejudice aspects of customers are substantially balanced
4. A diverse group of people provides better and varied ideas.
5. Companies want to hold themselves out as the employer of choice.
6. Diversity helps retain your people.
7. Diversity initiatives impact the bottom line.
[MANUEL ESPINOZA, (2007), 6-2-2009()]

Compliance with law
Compliance is no doubt an important factor. US Equal Employment Opportunity Commission (EEOC), has observed that, particularly after the Sep 11 attacks , focus was on preventing workplace discrimination, harassment and backlash against innocent employees and applicants for employment who were, or were perceived to be, Arab, Muslim, Middle Eastern, South Asian or Sikh.
Employment Non-Discrimination Act of 2007 (ENDA, H.R. 3685) prohibits discrimination. Further, it would add 'Sexual orientation' to the list of protected groups, classified by race, religion, ethnicity, sex, age, disability and pregnancy. This would grant protection to gay men, lesbians and bisexuals against discrimination at the workplace.

In the Constitution, free exercise of religion is an absolute right. The Workplace Religious Freedom Act of 2007 (WRFA, H.R. 1431) involves accommodation of religious freedom in the workplace. Currently, under Title VII of the Civil ...Download file to see next pagesRead More
Share:
Tags
Cite this document
(“Managing in an Inclusive Environment Diversity Essay”, n.d.)
Retrieved from https://studentshare.org/miscellaneous/1507290-managing-in-an-inclusive-environment-diversity

“Managing in an Inclusive Environment Diversity Essay”, n.d. https://studentshare.org/miscellaneous/1507290-managing-in-an-inclusive-environment-diversity.
Comments (0)
Click to create a comment or rate a document

CHECK THESE SAMPLES OF Managing in an Inclusive Environment Diversity

Diversity goes ahead of worker’s equity to cultivate office surroundings that value the dissimilarities and capitalizes on the latent of all workers, one that encourages worker’s inventiveness and innovativeness. (POLLITT, David, 2006)
Diversity management enables individuals to act upon up to their utmost potential as it emphasizes on modifying the company‘s ethnicity and infrastructure so that people may attain the peak output efficiency feasibly. Efficiently administration of diversity manoeuvres the “operating overheads and workforce attitudes, recruitment of human resources, sales and market share, creativity and innovation, group problem solving and productivity.” (POLLITT, David, 2006) In...
6 Pages(1500 words)Case Study

An ethical scenario arose during my first six months in this management role involving a 21-year-old employee who I witnessed smoking pot in the parking lot over lunch break. This scenario demanded that I consider the needs of the employee, as well as satisfying my obligations for enforcing the strict drug use policy administered at the senior levels of the company. This project describes the ethical scenario in detail, offering personal reflections on the incident as well as suggesting an ethical framework for handling situations like this in the future.
The situation which occurred had a young worker smoking pot on his lunch break on the company grounds. This, according to policy, is a termination offense and it is expected...
7 Pages(1750 words)Case Study
sponsored ads
Save Your Time for More Important Things
Let us write or edit the essay on your topic "Managing in an Inclusive Environment Diversity" with a personal 20% discount.
GRAB THE BEST PAPER

Let us find you another Essay on topic Managing in an Inclusive Environment Diversity for FREE!