Comments (0)
Add to wishlistDelete from wishlist
Cite this document
Summary
A necklace with a medallion and an amulet, both from different periods in the Byzantine era, lends itself to a comparison between the two objects in question as they both accentuate and bring to life unique aspects of Byzantine art. The necklace is made of gold and intricately crafted with a twisted design…
Download full paperFile format: .doc, available for editing
HIDE THIS PAPERGRAB THE BEST PAPER94.5% of users find it useful 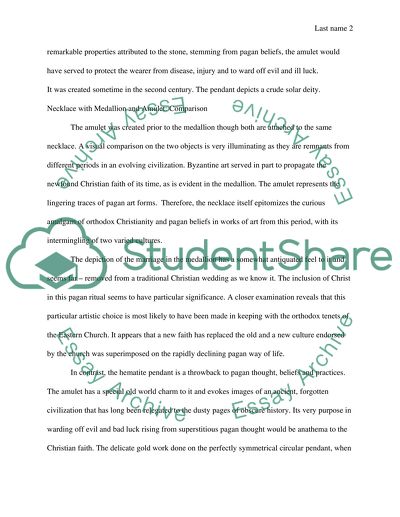 18 February 2007 Byzantine Art: Comparison Paper Necklace with Medallion and Amulet: A necklace with a medallion and an amulet, both from different periods in the Byzantine era, lends itself to a comparison between the two objects in question as they both accentuate and bring to life unique aspects of Byzantine art. The necklace is made of gold and intricately crafted with a twisted design. This unusual design gives it a delicate yet sturdy appearance. Suspended from the gold chain is a medallion, wrought in gold. It is medium - sized and disk - shaped. This ornamental piece is likely to have been made for the purpose of personal adornment. The medallion would also have been a symbol of wealth and prestige as jewelry throughout the ages usually serves as the ultimate status symbol. It was created in the first half of the fifth century. A marriage scene is depicted on the medallion - two figures are being joined by the bonds of holy matrimony and Christ is seen blessing the sacred union, holding symbolic wreaths over their heads. The image has been created with a decorative technique, used in metalwork known as repousse. This technique is used to form a raised pattern on a flat metallic surface by hammering on the reverse side.
The amulet attached to the necklace is a pendant wrought in gold and composed of black hematite, an iron ore. It is smaller than the medallion and oval in shape. Most probably, due to remarkable properties attributed to the stone, stemming from pagan beliefs, the amulet would have served to protect the wearer from disease, injury and to ward off evil and ill luck.
It was created sometime in the second century. The pendant depicts a crude solar deity.
Necklace with Medallion and Amulet: Comparison
The amulet was created prior to the medallion though both are attached to the same necklace. A visual comparison on the two objects is very illuminating as they are remnants from different periods in an evolving civilization. Byzantine art served in part to propagate the newfound Christian faith of its time, as is evident in the medallion. The amulet represents the lingering traces of pagan art forms. Therefore, the necklace itself epitomizes the curious amalgam of orthodox Christianity and pagan beliefs in works of art from this period, with its intermingling of two varied cultures.
The depiction of the marriage in the medallion has a somewhat antiquated feel to it and seems far - removed from a traditional Christian wedding as we know it. The inclusion of Christ in this pagan ritual seems to have particular significance. A closer examination reveals that this particular artistic choice is most likely to have been made in keeping with the orthodox tenets of the Eastern Church. It appears that a new faith has replaced the old and a new culture endorsed by the church was superimposed on the rapidly declining pagan way of life.
In contrast, the hematite pendant is a throwback to pagan thought, beliefs and practices. The amulet has a special old world charm to it and evokes images of an ancient, forgotten civilization that has long been relegated to the dusty pages of obscure history. Its very purpose in warding off evil and bad luck rising from superstitious pagan thought would be anathema to the Christian faith. The delicate gold work done on the perfectly symmetrical circular pendant, when juxtaposed against the black of the hematite pendant with its cruder oval shape seems to highlight how the vastly differing Classical and Christian schools of thought co - existed prior to the religious upheavals that were to follow. Read More
Share:
Tags
Cite this document
(“Byzantine Art: Comparison Paper Essay Example | Topics and Well Written Essays - 500 words”, n.d.)
Byzantine Art: Comparison Paper Essay Example | Topics and Well Written Essays - 500 words. Retrieved from https://studentshare.org/miscellaneous/1507026-byzantine-art-comparison-paper

Austria or you may call is the Republic of Austria in official terminology is located in Central Europe. Although the population figures do not touch the danger limit but the talent and resources are worthwhile there. Germany and Hungry are also near this region. Italy is in the south of Austria. Switzerland will be seen in the west. So, now you can realize the importance of this region clearly.
The GDP is also impressive here. You can say the economy is strong and it has much depth. The strong social market economy is the result of development and proper management by the government (DArt & Turner 2008). Traders find flexibility in business operations. Labor has a positive approach to work and jobs.
There was a tren...
9 Pages(2250 words)Term Paper
sponsored ads
Save Your Time for More Important Things
Let us write or edit the essay on your topic "Byzantine Art: Comparison Paper" with a personal 20% discount.
GRAB THE BEST PAPER

Let us find you another Essay on topic Byzantine Art: Comparison Paper for FREE!