Comments (0)
Add to wishlistDelete from wishlist
Cite this document
Summary
Science is a part of an individual's daily life. The vast area that science covers makes it an inevitable body of knowledge that an individual must gain an understanding of. Scientific knowledge is necessary in the development of well-rounded individuals. This is due to the fact that scientific knowledge serves as the backbone of understanding certain complexities that one may encounter in one's life…
Download full paperFile format: .doc, available for editing
HIDE THIS PAPERGRAB THE BEST PAPER98.4% of users find it useful 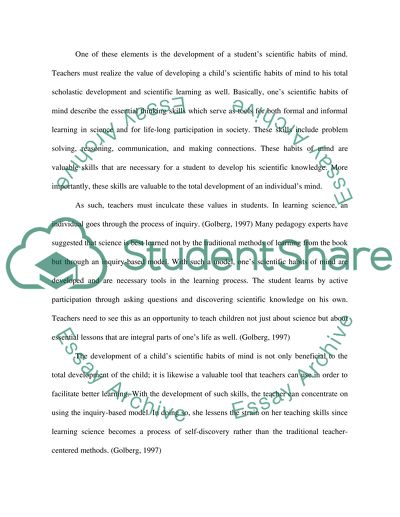 Download file to see previous pages Not only does the technique influence the amount of understanding a child gets, it likewise has its effects on the manner by which a child develops his thinking and decision making skills.
The method by which science is taught is highly relevant to the amount of learning of that the student gets. However, teaching science is not as simple as it may seem. Teaching science, most especially to children requires more than reading from textbooks and writing down lectures on the board. Various considerations need to be made in order to successfully make students scientifically proficient.
Part of determining the best way to teach science is to understand the importance of several elements. These elements help define what the student learns and how he learns. As previously mentioned, these two principles are both important for they both have their own functions later on in one's life.
One of these elements is the development of a student's scientific habits of mind. Teachers must realize the value of developing a child's scientific habits of mind to his total scholastic development and scientific learning as well. Basically, one's scientific habits of mind describe the essential thinking skills which serve as tools for both formal and informal learning in science and for life-long participation in society. These skills include problem solving, reasoning, communication, and making connections. These habits of mind are valuable skills that are necessary for a student to develop his scientific knowledge. More importantly, these skills are valuable to the total development of an individual's mind.
As such, teachers must inculcate these values in students. In learning science, an individual goes through the process of inquiry. (Golberg, 1997) Many pedagogy experts have suggested that science is best learned not by the traditional methods of learning from the book but through an inquiry-based model. With such a model, one's scientific habits of mind are developed and are necessary tools in the learning process. The student learns by active participation through asking questions and discovering scientific knowledge on his own. Teachers need to see this as an opportunity to teach children not just about science but about essential lessons that are integral parts of one's life as well. (Golberg, 1997)
The development of a child's scientific habits of mind is not only beneficial to the total development of the child; it is likewise a valuable tool that teachers can use in order to facilitate better learning. With the development of such skills, the teacher can concentrate on using the inquiry-based model. In doing so, she lessens the strain on her teaching skills since learning science becomes a process of self-discovery rather than the traditional teacher-centered methods. (Golberg, 1997)
Another important element in teaching science is active science discussion. This requires the active participation of the students in the learning process. In an active science learning environment, there is less emphasis on book-based learning and more weight is placed in learning by inquiry specifically through a discussion with the teacher and with peers. (Golberg, 1997) In the traditional methods of teaching, the teacher dominates the classroom since ...Download file to see next pagesRead More
Share:
Tags
Cite this document
(“Teaching science Essay Example | Topics and Well Written Essays - 1250 words”, n.d.)
Retrieved from https://studentshare.org/miscellaneous/1506880-teaching-science

CHECK THESE SAMPLES OF Teaching science

Medical knowledge consists of three issues. Knowledge gained at the medical college, knowledge gained in the practical field in real-life situations in dealing with the patients and above all the self-confidence of the doctor to put into practice his latent skill. A confident doctor does not hesitate to tell the truth. Atul Gawande (2003) writes “There are surgeons who will see faults everywhere except in themselves. They have no questions and no fears about their abilities. As a result, they learn nothing from their mistakes and know nothing of their limitations.” (p.61)Such a doctor lacks loyalty to the professional ethical principles. A lie told has to be remembered all the times, but truth has no such problems. Gaw...
7 Pages(1750 words)Book Report/Review
sponsored ads
Save Your Time for More Important Things
Let us write or edit the essay on your topic "Teaching science" with a personal 20% discount.
GRAB THE BEST PAPER

Let us find you another Essay on topic Teaching science for FREE!