Comments (0)
Add to wishlistDelete from wishlist
Cite this document
Summary
The concept of letting indicted prisoners out on parole has always had both its supporters and its nay-sayers. Many feel that the idea of letting known offenders out in the hope that they will not repeat their crimes against society is a little irresponsible…
Download full paperFile format: .doc, available for editing
HIDE THIS PAPERGRAB THE BEST PAPER92.8% of users find it useful 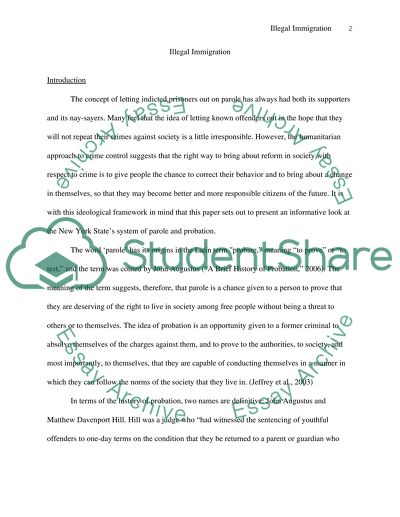 Extract of sample "Is Parole Effective"

Download file to see previous pages It is with this ideological framework in mind that this paper sets out to present an informative look at the New York State's system of parole and probation.
The word 'parole' has its origins in the Latin term "probare," meaning "to prove" or "to test," and the term was coined by John Augustus ("A Brief History of Probation," 2006). The meaning of the term suggests, therefore, that parole is a chance given to a person to prove that they are deserving of the right to live in society among free people without being a threat to others or to themselves. The idea of probation is an opportunity given to a former criminal to absolve themselves of the charges against them, and to prove to the authorities, to society, and most importantly, to themselves, that they are capable of conducting themselves in a manner in which they can follow the norms of the society that they live in. (Jeffrey et al., 2003)
In terms of the history of probation, two names are definitive: John Augustus and Matthew Davenport Hill. Hill was a judge who "had witnessed the sentencing of youthful offenders to one-day terms on the condition that they be returned to a parent or guardian who would closely supervise them" ("A Brief History," 2006). Hill applied the same idea of 'guardianship' of criminal offenders to the legal system:
When he eventually became the Recorder of Birmingham, a judicial post, he used a similar practice for individuals who did not seem hopelessly corrupt. If offenders demonstrated a promise for rehabilitation, they were placed in the hands of generous guardians who willingly took charge of them. Hill had police officers pay periodic visits to these guardians in an effort to tack the offender's progress and to keep a running account. ("A Brief History," 2006)
The above citation illustrates a very important aspect of probation: that not everyone is worthy of it. It is only when people in prison demonstrate, either through good conduct or because of the nature of their crimes, or for any other valid reason, that they deserve the chance to be free again, that they may be offered release on probation.
Augustus, like Hill, also came up with the idea of probation based on an analogy with another practice; in his case, he was inspired by the way in which victims of alcohol abuse can be reformed through rehabilitation. (Robert et al., 2002) Widely regarded as the world's first parole officer, Augustus was the owner of a successful boot-making business in early nineteenth-century Boston before he made his entry into the judicial system. He believed that those who had committed crimes "could be rehabilitated through understanding, kindness and sustained moral suasion, rather then through conviction and jail sentences" ("A Brief History," 2006). The first person ever to be paroled was a "common drunkard" in 1841, who "was ordered to appear in court three weeks [after his] sentencing. He returned to court a sober man [] To the astonishment of all in attendance, his appearance and demeanor had dramatically changed," ("A Brief History," 2006) and thus began the system of probation in America.
The State of New York State had the official beginning of the system of probation in 1901. by 1917, a State Division of Probation had been implemented in the State's Department of Corrections. The Division of Prob ...Download file to see next pagesRead More
Share:
Tags
Cite this document
(“Is Parole Effective Essay Example | Topics and Well Written Essays - 1500 words”, n.d.)
Is Parole Effective Essay Example | Topics and Well Written Essays - 1500 words. Retrieved from https://studentshare.org/miscellaneous/1506158-is-parole-effective

CHECK THESE SAMPLES OF Is Parole Effective

Considering reports and issues such as privacy regulations, data protection, risk management compliance, project management and governance, information security, business continuity management and effective corporate governance, an effective IT infrastructure seems to be the primary tool for the implementation of practical and strategic solutions. An updated IT infrastructure is important for improving corporate governance and shareholder returns (Kaen 2003; Trites, 2004).
According to the Global Corporate Governance Principles, "Corporate governance" refers to the "relationship among various participants in determining the direction and performance of corporations. The primary participants are (1) the shareholders, (2) the m...
44 Pages(11000 words)Research Proposal

Instead, one accomplishes prominence by leading the field with one's ideas. If one thinks of some of the most renowned people in the field of Effective education, one knows they got to their positions not by demonstrating high scores on examinations of knowledge of books on effective education, but by being leaders with their ideas about how to educate the effective.
Effectiveness in leadership is, in large part, a function of creativity in producing ideas, analytical intelligence in assessing the quality of these sort of ideas, practical intelligence in executing the ideas and convincing others to value and follow the ideas, and wisdom to ensure that the decisions and their execution are for the common good of all stak...
10 Pages(2500 words)Assignment

...What constitutes the aesthetic aspect of urban environments, and is this a quality of the environment which urban planning should seek to maintain and enhance?
6 Pages(1500 words)Essay

...An overview of Effective Practices for Teaching Children to Read Teaching how to read is a complex process that requires a lot of expertise and experience. It is an art and a science at the same time. Its scientific part requires that the teacher should possess the necessary skills about reading, based on scientific evidence. It is an art since it requires that the skills be applied effectively in order to achieve the best results. A difficulty comes in the actual application of the skills. A teacher may be well equipped with the scientific knowledge but may lack on the effective teaching practices, which are necessary in delivering. A teacher who knows to teach how to read is the one who associates well with the children and knows...
7 Pages(1750 words)Research Paper
sponsored ads
Save Your Time for More Important Things
Let us write or edit the essay on your topic "Is Parole Effective" with a personal 20% discount.
GRAB THE BEST PAPER

Let us find you another Essay on topic Is Parole Effective for FREE!