Summary of I felt a Funeral, in my Brain - Book Report/Review Example

Comments (0)
Add to wishlistDelete from wishlist
Cite this document
Summary
This poem has always had different variants of interpretation: some critics say that Emily Dickinson wanted to show a funeral as a philosophical vision of human's life (Cameron 1979, Cameron 1992) or the process of getting free (Ford 1997); others think that a funeral is a metaphor of the speaker's descent into madness (Wolff 1988) or reaction to the great stress or dread (Bennett 1986).
…
Download full paperFile format: .doc, available for editing
HIDE THIS PAPERGRAB THE BEST PAPER92.4% of users find it useful 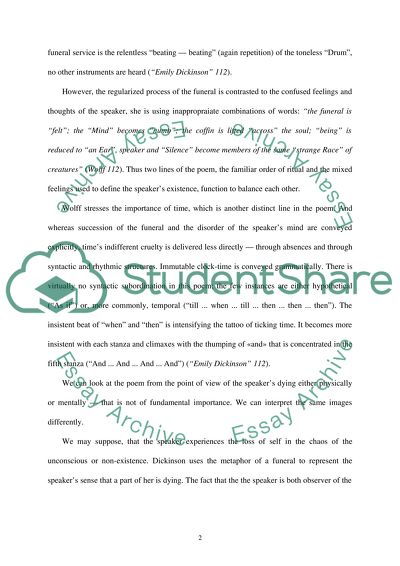 Extract of sample "Summary of I felt a Funeral, in my Brain"

Download file to see previous pages Cameron writes that the speaker's speech is grammatically past tense, which makes it also, so to say, emotionally past tense ("Lyric Time" 89). Wolff thinks that what is really important, that we are able to understand true values of life only from the position of death ("Emily Dickinson" 113).
Wolff pays our attention to the fact that there are no distinct "others" (except for mourners), nothing but a lone speaker. No information about life of the deceased can be gathered from this funeral, the mourners are silent - they are just muffled figures, who move constantly "to and fro", the poet repeats - "treading - treading". The only sound during the funeral service is the relentless "beating - beating" (again repetition) of the toneless "Drum", no other instruments are heard ("Emily Dickinson" 112).
However, the regularized process of the funeral is contrasted to the confused feelings and thoughts of the speaker, she is using inappropraiate combinations of words: "the funeral is "felt"; the "Mind" becomes "numb"; the coffin is lifted "across" the soul; "being" is reduced to "an Ear", speaker and "Silence" become members of the same "strange Race" of creatures" (Wolff 112). Thus two lines of the poem, the familiar order of ritual and the mixed feelings used to define the speaker's existence, function to balance each other.
Wolff stresses the importance of time, which is another distinct line in the poem. And whereas succession of the funeral and the disorder of the speaker's mind are conveyed explicitly, time's indifferent cruelty is delivered less directly - through absences and through syntactic and rhythmic structures. Immutable clock-time is conveyed grammatically. There is virtually no syntactic subordination in this poem; the few instances are either hypothetical ("As if") or, more commonly, temporal ("till ... when ... till ... then ... then ... then"). The insistent beat of "when" and "then" is intensifying the tattoo of ticking time. It becomes more insistent with each stanza and climaxes with the thumping of and that is concentrated in the fifth stanza ("And ... And ... And ... And") ("Emily Dickinson" 112).
We can look at the poem from the point of view of the speaker's dying either physically or mentally - that is not of fundamental importance. We can interpret the same images differently.
We may suppose, that the speaker experiences the loss of self in the chaos of the unconscious or non-existence. Dickinson uses the metaphor of a funeral to represent the speaker's sense that a part of her is dying. The fact that the the speaker is both observer of the funeral and its participant, indicates that the self is divided, logically, by the end of the poem, the self shatters into pieces.
On the other hand, we can think, that the mental state the speaker describes is like being buried alive: "the heightened awareness of sounds (treading, beating, creaking, tolling) and the sense of enclosure ("in my Brain," they all were seated," "a ...Download file to see next pagesRead More
Share:
Tags
Cite this document
(“Summary of I felt a Funeral, in my Brain Book Report/Review”, n.d.)
Summary of I felt a Funeral, in my Brain Book Report/Review. Retrieved from https://studentshare.org/miscellaneous/1505844-summary-of-i-felt-a-funeral-in-my-brain

“Summary of I Felt a Funeral, in My Brain Book Report/Review”, n.d. https://studentshare.org/miscellaneous/1505844-summary-of-i-felt-a-funeral-in-my-brain.
Comments (0)
Click to create a comment or rate a document

CHECK THESE SAMPLES OF Summary of I felt a Funeral, in my Brain

...My History As A I am from Jordan and I came to the United s with my parents when I was 20 years old. My parents were convinced beyond reasonable doubt that the United States was the best place for us to start a new life and make something out of ourselves so we packed out bags and head out for the land promise. We settled in the United States and started a new life. Living in a foreign land has its advantages and disadvantages. On of the main problems that I came across during my first few months in America was the language barrier. I have learned how to speak the English language while I was a student in Jordan but what I learned in school was not the same as the language used in the streets of the United States. My American friends...
8 Pages(2000 words)Essay
sponsored ads
Save Your Time for More Important Things
Let us write or edit the book report/review on your topic "Summary of I felt a Funeral, in my Brain" with a personal 20% discount.
GRAB THE BEST PAPER

Let us find you another Book Report/Review on topic Summary of I felt a Funeral, in my Brain for FREE!