Comments (0)
Add to wishlistDelete from wishlist
Cite this document
Summary
The Company to be examined is Marks and Spencer Retail Company. It is one of the largest retail chains in the UK with over sixty thousand employees under its wing. Employee relations within this company are a combination of both positive and negative aspects…
Download full paperFile format: .doc, available for editing
HIDE THIS PAPERGRAB THE BEST PAPER97.8% of users find it useful 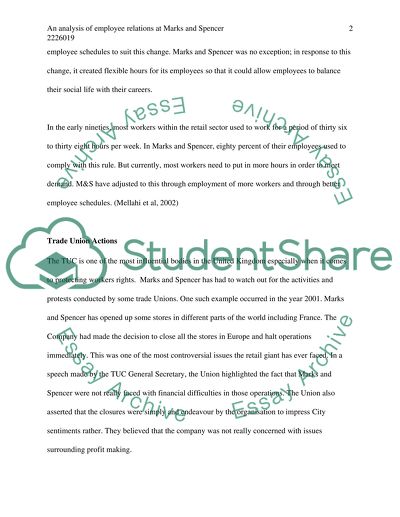 Extract of sample "Employee Relations in Marks and Spencer"

Download file to see previous pages However, with fast technological developments and greater linkages between various countries around the world, there was greater competitiveness in the retail sector thus creating a need to adopt less adversarial approaches to employee relations. The Company realised that they had to engage their employees a little more. This led to some of the present staff management practices adopted by the company. The company has tried instituting some sound principles within management but there are still certain problems here and there. (M&S, 2007b)
In the past, there were no cases of Sunday trading. Workers in the retail sector counted on the fact that their work arrangements did not necessitate additional efforts. However after introduction of Sunday trading in the UK, there was a need for all retail companies to adjust their employee schedules to suit this change. Marks and Spencer was no exception; in response to this change, it created flexible hours for its employees so that it could allow employees to balance their social life with their careers.
In the early nineties, most workers within the retail sector used to work for a period of thirty six to thirty eight hours per week. In Marks and Spencer, eighty percent of their employees used to comply with this rule. But currently, most workers need to put in more hours in order to meet demand. M&S have adjusted to this through employment of more workers and through better employee schedules. (Mellahi et al, 2002)
Trade Union Actions
The TUC is one of the most influential bodies in the United Kingdom especially when it comes to protecting workers rights. Marks and Spencer has had to watch out for the activities and protests conducted by some trade Unions. One such example occurred in the year 2001. Marks and Spencer has opened up some stores in different parts of the world including France. The Company had made the decision to close all the stores in Europe and halt operations immediately. This was one of the most controversial issues the retail giant has ever faced. In a speech made by the TUC General Secretary, the Union highlighted the fact that Marks and Spencer were not really faced with financial difficulties in those operations. The Union also asserted that the closures were simply and endeavour by the organisation to impress City sentiments rather. They believed that the company was not really concerned with issues surrounding profit making.
TUC also said that they were trying to protect foreign worker's rights in general. Marks and Spencer tends to export their bad employment practices into other countries. The Trade Union brought to the forefront the issue of complacency prevailing in M&S stores. The Company had not been very considerate at some stage in their firing and hiring processes. These practices are quite common in the UK despite their notoriety. But in some European countries like France, these employment practices are quite unlawful. The trade Union spoke about how M&S has been sacking employees without notice in those countries and how it faced the full arm of the law. (Storey et al, 2005)
TUC advocated for more dialogue and consultations between employees and employers at all times and not when issues have spiralled out of control. The actions of this trade Union and others have caused M&S to change some of its employment practi ...Download file to see next pagesRead More
Share:
Tags
Cite this document
(“Employee Relations in Marks and Spencer Case Study”, n.d.)
Employee Relations in Marks and Spencer Case Study. Retrieved from https://studentshare.org/miscellaneous/1505179-employee-relations-in-marks-and-spencer

“Employee Relations in Marks and Spencer Case Study”, n.d. https://studentshare.org/miscellaneous/1505179-employee-relations-in-marks-and-spencer.
Comments (0)
Click to create a comment or rate a document

CHECK THESE SAMPLES OF Employee Relations in Marks and Spencer

The Significance of the 1961 Vienna Convention on Diplomatic Relations

The ratification of the Convention was momentous in that it called for the ‘establishment of diplomatic relations between states’ and for ‘permanent diplomatic missions to take place by mutual consent.”2 The foundation of these diplomatic relations hold considerable value as it cemented equitably and just principles that govern diplomatic relations and practice among states as the rules afforded in the convention lay down the obligations of the receiving states on matters regarding amenities, privileges and immunities accorded to envoys, diplomats, diplomatic representatives and their families, anticipates potential abuse by members of the mission or and how the receiving state can counter such abuse.
...
11 Pages(2750 words)Assignment

By virtue of the Health and Safety At Work Act 1974 the employer is under a statutory duty to maintain the water and sewage plant if it is reasonable and practical to do so. The duty is contained in Section 2 which mandates that the employer ensure the safety and welfare of all empl...
15 Pages(3750 words)Case Study

... in it-input, processing and output. The systems model is used as it provides feedback to each component. The data could be collected through questionnaires, interviews and observation. The most suitable will a combination of the three. Overcoming resistance to change: In order to formulate policies for overcoming resistance to change, identification of the reasons for the resistance is essential. In the concept of A. J. Schuler, there are mainly ten reasons that restrict the changes in organization by personnel. They are greater risk factors related to the change, lack of confidence, lack of role models for the change etc. In the case of Mark and Spencer Company attempts to make changes in terms of attitude of the employees...
7 Pages(1750 words)Case Study

The company has a long-established history of delivering high-quality products marked with innovation, service, price, and trust to its customers. The history of the company could be traced back to Michael Marks who set up a penny stall in Leeds selling almost everything in 1884. From there onwards the company led by its chairman and other executives experienced organic and strategic growth becoming one of the largest retailers in the world (M&S 2009). The company offers a versatile blend of products and services to its customers ranging from clothing, accessories, home products, and food items. The company procures these products from 2,000 global suppliers keeping in view to offer the highest standards so that the customers...
8 Pages(2000 words)Case Study

... and other transnational frameworks are still undeveloped, there is a growing search for the right model for the world in employee information and consultation. The European Directive which created a wider framework for consultation and information has transcended the local level of collective employment relations. The employees’ rights to participation have for the first time become truly transnational. Although there are little literature regarding its actual performance and effectiveness, the overall framework is an ideal model that can be adopted globally. What is further required is the creation of a much structured form that would consider important factors such as cultural diversity and varying labor laws of states. Works Cited...
9 Pages(2250 words)Coursework

In essence, employee commitment means loyalty to the employer and is one of the aspects that signify successful employee relations. The employer must be ready to reciprocate the commitment of employees for satisfaction in the workplace to be accomplished. This paper presents a critical assessment of some issues which may arise for the management researcher investigating the extent of employee commitment in a large multinational organization. It focuses on some of the factors that affect employee commitment in multinational organizations such as employee satisfaction, retention, career ladders, job security, employment relations, cultural diversity and empowerment of the human resources.
Employee satisfaction is a significant...
8 Pages(2000 words)Essay
sponsored ads
Save Your Time for More Important Things
Let us write or edit the case study on your topic "Employee Relations in Marks and Spencer" with a personal 20% discount.
GRAB THE BEST PAPER

Let us find you another Case Study on topic Employee Relations in Marks and Spencer for FREE!