Comments (0)
Add to wishlistDelete from wishlist
Cite this document
Summary
There are a number arguments and counter arguments regarding the aspect of cloning, particularly human cloning, in the scientific and social world. But it should be noted that no scientific breakthrough has ever been achieved without sea of skepticism. Logically so, this issue would not be solved without relevant amount of disagreement no matter how much Cloning can be a very useful tool if used under the right conditions…
Download full paperFile format: .doc, available for editing
HIDE THIS PAPERGRAB THE BEST PAPER92.4% of users find it useful 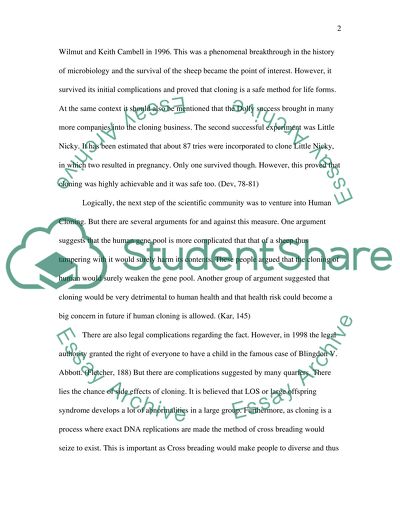 Download file to see previous pages Thus even after numerous failures in the initial stages the initial stages the scientists worked on the procedure of this vitro Fertilization process where the scientific community from the United States came to be successful with the first IVF baby that was born in 1978. However it should be stated in the same context that the US quickly banned it after the baby came out. (King, 126)
The debate over cloning continued but at last non human cloning was allowed and approved in Science Congress. Dolly the sheep was cloned by the famous scientists Ian Wilmut and Keith Cambell in 1996. This was a phenomenal breakthrough in the history of microbiology and the survival of the sheep became the point of interest. However, it survived its initial complications and proved that cloning is a safe method for life forms. At the same context it should also be mentioned that the Dolly success brought in many more companies into the cloning business. The second successful experiment was Little Nicky. It has been estimated that about 87 tries were incorporated to clone Little Nicky, in which two resulted in pregnancy. Only one survived though. However, this proved that cloning was highly achievable and it was safe too. (Dev, 78-81)
Logically, the next step of the scientific community was to venture into Human Cloning. But there are several arguments for and against this measure. One argument suggests that the human gene pool is more complicated that that of a sheep thus tampering with it would surely harm its contents. These people argued that the cloning of human would surely weaken the gene pool. Another group of argument suggested that cloning would be very detrimental to human health and that health risk could become a big concern in future if human cloning is allowed. (Kar, 145)
There are also legal complications regarding the fact. However, in 1998 the legal authority granted the right of everyone to have a child in the famous case of Blingdon V. Abbott. (Fletcher, 188) But there are complications suggested by many quarters. There lies the chance of side effects of cloning. It is believed that LOS or large offspring syndrome develops a lot of abnormalities in a large group. Furthermore, as cloning is a process where exact DNA replications are made the method of cross breading would seize to exist. This is important as Cross breading would make people to diverse and thus develop. Then again uses of spare part organs are in scrutiny too. Many people don't believe that one should use and embryo for organs. (Deb, 323)
However the aspect of Cloning in Agriculture supports the use of cloning as streamline of Clone Elites would likely lead to mass production of transgenic animals where no safe guards are put on animals once it is able to produce protein. The quality of the products would also be taken into account as in cows the quality would vary as most cows produce about 1000 gallons, but one can get cows the make 2000 gallons with cloning alongside the overall quality of most if not all food would go up. (Lamb, 243-245) This would lead to a huge profit margin and main companies in the agriculture cloning field like Biotech are already taking interest in the ...Download file to see next pagesRead More
Share:
Tags
Cite this document
(“Human and animals Cloning Essay Example | Topics and Well Written Essays - 750 words”, n.d.)
Human and animals Cloning Essay Example | Topics and Well Written Essays - 750 words. Retrieved from https://studentshare.org/miscellaneous/1504821-human-and-animals-cloning

CHECK THESE SAMPLES OF Human and animals Cloning

... activities such as cutting down trees, lighting campfires and not putting them out properly after use, casually tossed cigarette butts, lighting fireworks, discharging of firearms, scattering broken glass and chain- saws that cause damage and spoil the natural ecosystem. Poaching or hunting is another human activity that threatens to make certain species of animals, birds and reptiles extinct. a) Deserts: Deserts are the world’s most harsh, spectacular and beautiful habitats with specialized but fragile eco- systems that support or house a unique and specialized diversity of flora and fauna. Due to their highly specialized nature, the species that live there, are essentially vulnerable to even the slightest disturbance in their habitat...
7 Pages(1750 words)Term Paper

...Hello, I have read this and thinks it’s perfect I have slight amendments which are highlighted in red. thanks Universal Declaration of Human Rights Introduction Human rights are defined as, the basic standards by which we can identify and measure inequality and fairness. These rights are specified in the Universal Declaration of Human Rights.1 The United Nations adopted the Universal Declaration of Human Rights (UDHR) on the 10th of December 1948. It consists of a number of civil, cultural, economic, political, and social rights. Although, it is not legally binding, it provides an authoritative interpretation of several articles of the UN Charter; and the latter is binding on the member states of the United Nations.2 There are several...
8 Pages(2000 words)Case Study
sponsored ads
Save Your Time for More Important Things
Let us write or edit the essay on your topic "Human and animals Cloning" with a personal 20% discount.
GRAB THE BEST PAPER

Let us find you another Essay on topic Human and animals Cloning for FREE!