Comments (0)
Add to wishlistDelete from wishlist
Cite this document
Summary
As a society in general, the majority of us have at least heard of the term 'cloning'. However at the same time, the majority of us are in fact not completely sure as to what cloning actually is. In order to come to a clearer and more understanding viewpoint on this subject matter, the following question must be thoroughly addressed:
…
Download full paperFile format: .doc, available for editing
HIDE THIS PAPERGRAB THE BEST PAPER95.3% of users find it useful 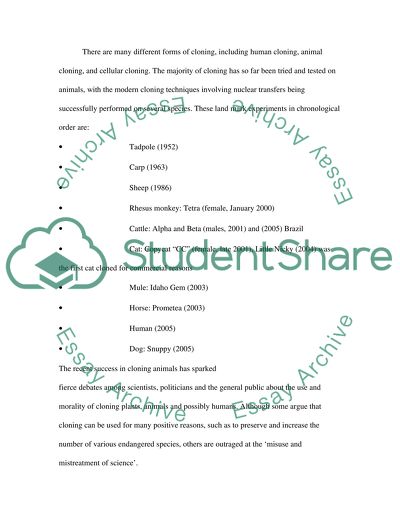 Cloning: A Critical Review (Fill in with your information etc Cloning: A Critical Review As a society in general,the majority of us have at least heard of the term 'cloning'. However at the same time, the majority of us are in fact not completely sure as to what cloning actually is. In order to come to a clearer and more understanding viewpoint on this subject matter, the following question must be thoroughly addressed:
1. What is cloning
By discussing this question to the full extent, we will be able to come to a more conclusive and knowledgeable objective on this subject of interest. This is what will be dissertated in the following.
What is Cloning
The term cloning is literally referred to as "using specialized DNA technology to produce multiple, exact copies of a single gene or other segment of DNA to obtain enough material for further study." ("CDC", 2006). The process itself is actually referred to as cloning DNA, and the resulting cloned (or copied) collections of DNA molecules are called clone libraries. In more simple terms, cloning is the process of creating an identical copy of something original.
Cloning is the process of making a genetically identical organism through nonsexual means. Although the idea of cloning may seem rather revolutionary to some, it has in fact been around for some while. It has been used for many years to produce plants (in fact even growing a plant from a cutting is a type of cloning).
There are many different forms of cloning, including human cloning, animal cloning, and cellular cloning. The majority of cloning has so far been tried and tested on animals, with the modern cloning techniques involving nuclear transfers being successfully performed on several species. These land mark experiments in chronological order are:
Tadpole (1952)
Carp (1963)
Sheep (1986)
Rhesus monkey: Tetra (female, January 2000)
Cattle: Alpha and Beta (males, 2001) and (2005) Brazil
Cat: Copycat "CC" (female, late 2001), Little Nicky (2004) was the first cat cloned for commercial reasons
Mule: Idaho Gem (2003)
Horse: Prometea (2003)
Human (2005)
Dog: Snuppy (2005)
The recent success in cloning animals has sparked
fierce debates among scientists, politicians and the general public about the use and morality of cloning plants, animals and possibly humans. Although some argue that cloning can be used for many positive reasons, such as to preserve and increase the number of various endangered species, others are outraged at the 'misuse and mistreatment of science'.
Currently the most successful cloning technique is
that of the somatic cell nuclear transfer. This is the same cloning technique which allowed Dolly the sheep to be cloned, is also the same technique used by ACT - the first company to successfully clone a human embryo. Somatic cell nuclear transfer (SCNT) uses a different approach than the other more artificial embryo twinning, but at the same time it produces the same result: "an exact clone, or genetic copy, of an individual." (The University of Utah, 2006).
The explanation as to the reason for cloning is commonly that the main reason to clone plants or animals is "to mass produce organisms with desired qualities, such as a prize-winning orchid or a genetically engineered animal - for instance, sheep have been engineered to produce human insulin." (Freudenrich, 2006). Although cloning has been around now for a quite a while, and does not seem to be going anywhere quickly, the fierce debate over such a serious and questionable subject matter is sure to resonate as long as the issue of cloning is around.
References
"CDC". (2006, March). Cloning. Retrieved March 20,
2006, from http://www.cdc.gov/genomics/gtesting/ACCE/FBR/CF/CFGlossary2.htm
Freudenrich, Craig C. (2006). How Cloning Works.
Retrieved March 20, 2006, from http://science.howstuffworks.com/cloning4.htm
The University of Utah. (2006). What is Cloning
Retrieved March 20, 2006, from http://gslc.genetics.utah.edu/units/cloning/whatiscloning/ Read More
Share:
Tags
Cite this document
(“Cloning: A Critical Review Essay Example | Topics and Well Written Essays - 500 words”, n.d.)
Retrieved from https://studentshare.org/miscellaneous/1502742-cloning-a-critical-review

CHECK THESE SAMPLES OF Cloning: A Critical Review

Considering the goals and objectives of the organization, the various factors that have influenced the aspect of voting in favor of the emerging markets have been determined in this research paper. The critical evaluation of FIFA’s decision in awarding the emerging markets with the hosting rights of the Football Cup has been done by determination of the extent to which the goals and objectives of the governing body have been fulfilled with this decision (Baade and Matheson, 2004, p.353). The research problem also established the fairness of the World Cup Bidding Process and the basis of the FIFA Executive Committee’s decision in awarding the Football World Cup hosting to the developing countries. In order to analyze th...
29 Pages(7250 words)Dissertation
sponsored ads
Save Your Time for More Important Things
Let us write or edit the essay on your topic "Cloning: A Critical Review" with a personal 20% discount.
GRAB THE BEST PAPER

Let us find you another Essay on topic Cloning: A Critical Review for FREE!