Comments (0)
Add to wishlistDelete from wishlist
Cite this document
Summary
A labor, or trade, union is an association of wage earners in a trade or closely related trades. Its purpose is to protect and advance its members' interests with regard to wages and hours and conditions of employment. This may mean providing legal advice, taking political action, or influencing government representatives…
Download full paperFile format: .doc, available for editing
HIDE THIS PAPERGRAB THE BEST PAPER91.5% of users find it useful 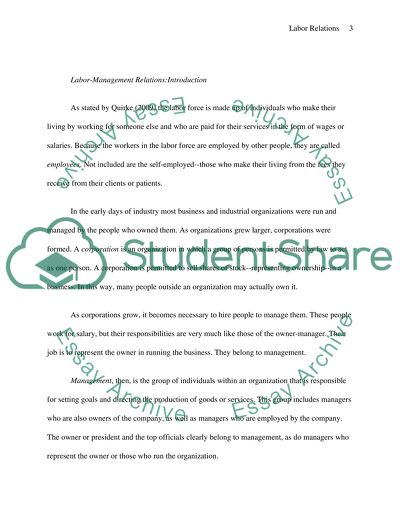 Download file to see previous pages Because the workers in the labor force are employed by other people, they are called employees. Not included are the self-employed--those who make their living from the fees they receive from their clients or patients.
In the early days of industry most business and industrial organizations were run and managed by the people who owned them. As organizations grew larger, corporations were formed. A corporation is an organization in which a group of persons is permitted by law to act as one person. A corporation is permitted to sell shares of stock--representing ownership--in a business. In this way, many people outside an organization may actually own it.
As corporations grow, it becomes necessary to hire people to manage them. These people work for salary, but their responsibilities are very much like those of the owner-manager. Their job is to represent the owner in running the business. They belong to management.
Management, then, is the group of individuals within an organization that is responsible for setting goals and directing the production of goods or services. This group includes managers who are also owners of the company, as well as managers who are employed by the company. The owner or president and the top officials clearly belong to management, as do managers who represent the owner or those who run the organization.
Agreement and Disagreement between Labor and Management
Labor and management agree in some areas and disagree in others. Both have a common interest in a healthy economy. Both wish to see the economy grow, so that more goods and services are bought. This in turn means that more jobs are provided, bringing increased wages and salaries to the workers and increased profits to the owners.
In an industry or business firm, labor and management have a common interest in producing goods or services that will sell. This means that they must be able to compete in quality, quantity, and price. (Lavan & Martin, 2008)
Labor Unions
A labor union is an organization of employees whose purpose is to bargain with an employer or a group of employers over pay and working conditions. Historically unions are traceable to the guilds of the Middle Ages, which operated chiefly to establish quality standards for products and prices that were "just "in the sense that they enabled master workmen to support their families at customary levels while also providing training for apprentices. Their English origins are closely linked to the "de-skilling" effects of the technology of the Industrial Revolution on workers, which altered the traditional hierarchy of skills and their associated wage levels. Nevertheless, it was not until the founding of the Trades Union Congress in 1868 and the subsequent passage of the Trade Union Act that the English labor movement flourished. By the late 1800s, British unions allied with socialists to establish the Independent Labor party (later the Labor party). (Carlton, 2007)
Collective Bargaining
Collective Bargaining, between employers and unions establishes formal rules governing work and conditions of employment. The term applies to negotiations about wages, hours, conditions of work, and fringe benefits, and ...Download file to see next pagesRead More
Share:
Tags
Cite this document
(“Labor Relations in Education Essay Example | Topics and Well Written Essays - 1000 words”, n.d.)
Labor Relations in Education Essay Example | Topics and Well Written Essays - 1000 words. Retrieved from https://studentshare.org/miscellaneous/1504800-labor-relations-in-education

CHECK THESE SAMPLES OF Labor Relations in Education

By virtue of the Health and Safety At Work Act 1974 the employer is under a statutory duty to maintain the water and sewage plant if it is reasonable and practical to do so. The duty is contained in Section 2 which mandates that the employer ensure the safety and welfare of all empl...

As pointed out in a study by Osgood and Halsall (2007) where they carried out research to examine the position of women in leadership or management positions, a “glass ceiling” exists for women in the academic setting, which could significantly impair motivation. Since many of the individuals employed in the early education sector are women, addressing this issue is even more important because these individuals are faced with the difficult task of shaping young minds while also dealing with the problems associated with the actual physical care of very young children. The quality of professionals in this sector is vital because it impacts the growth and development of the children that they care for. The degree of invol...
6 Pages(1500 words)Coursework
sponsored ads
Save Your Time for More Important Things
Let us write or edit the essay on your topic "Labor Relations in Education" with a personal 20% discount.
GRAB THE BEST PAPER

Let us find you another Essay on topic Labor Relations in Education for FREE!