Comments (0)
Add to wishlistDelete from wishlist
Cite this document
Summary
Suppose I am the vice-principal of a prestigious school. New York City's School of the Future can be such school. One of the 8th-grade teachers (which we'll name as Sue) is having problems with this certain student, who came from one of the poorest and underprivileged folks in the city…
Download full paperFile format: .doc, available for editing
HIDE THIS PAPERGRAB THE BEST PAPER94% of users find it useful 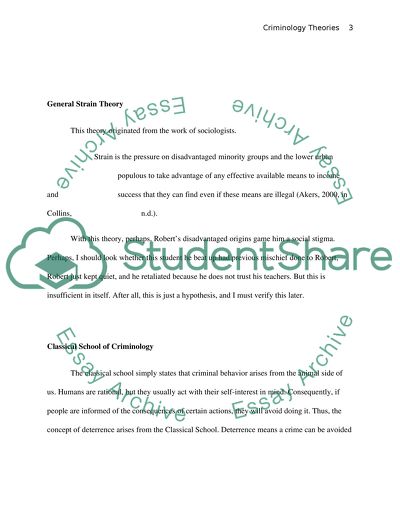 Download file to see previous pages On my part, I would have opted to expel Robert immediately. However, my background in criminology prevents me from doing so.
Theories of criminology are like lenses of different shades, sizes, and colors. They allow professionals and practitioners to look at an issue with a wider perspective. This is what I am obliged to do. I will consult the different applicable theories, compare and contrast their approaches, and finally I will state my decision in this hypothetical situation. In many ways, some of these theories contradict each other. Sometimes, they complement each other. Nevertheless, these should be thoroughly studied so that growth in knowledge can be attained. And, it is true: criminology can really be applied to many situations; it is not just a course for would be police officers or Crime Scene Investigation people.
Strain is the pressure on disadvantaged minority groups and the lower urban populous to take advantage of any effective available means to income and success that they can find even if these means are illegal (Akers, 2000, in Collins, n.d.).
With this theory, perhaps, Robert's disadvantaged origins game him a social stigma. Perhaps, I should look whether this student he beat up had previous mischief done to Robert, Robert just kept quiet, and he retaliated because he does not trust his teachers. But this is insufficient in itself. After all, this is just a hypothesis, and I must verify this later.
Classical School of Criminology
The classical school simply states that criminal behavior arises from the animal side of us. Humans are rational, but they usually act with their self-interest in mind. Consequently, if people are informed of the consequences of certain actions, they will avoid doing it. Thus, the concept of deterrence arises from the Classical School. Deterrence means a crime can be avoided by making sure that people are aware that punishment for a certain crime is so severe that doing it is not really worth it. (The Classical School, 1998).
Perhaps, Robert is not really aware of the consequences of such anti-social behavior. If so, I will consider emphasizing to the students the consequences of such behavior. My would-be initial reaction would not be a far-fetched choice after-all. If this theory were to be followed, the school must punish Robert so severely so that no other student, privileged or not, will ever consider doing such behavior in the future.
Also, in such event, I will review whether the disciplinary system is outdated and ineffective. I will form a committee to draft a new set of disciplinary rules, if such conclusions are also reached in an investigation.
William Sheldon: Body Shapes
Simply put, certain features of the body are determinants of criminal behavior. In particular, criminals usually have big, athletic, or overweight bodies. However, this theory is put in doubt. Some theories say that instead of Sheldon's somatype, it should be body mass index. (Maddan, S., Walker, J., and Miller, J., 2008) But this theory is not applicable since Robert is not really that huge or overweight or athletic. He is just an average guy, if you do not know ...Download file to see next pagesRead More
Share:
Tags
Cite this document
(“Application of Criminological Theory Case Study”, n.d.)
Application of Criminological Theory Case Study. Retrieved from https://studentshare.org/miscellaneous/1504718-application-of-criminological-theory

CHECK THESE SAMPLES OF Application of Criminological Theory

As pointed out in a study by Osgood and Halsall (2007) where they carried out research to examine the position of women in leadership or management positions, a “glass ceiling” exists for women in the academic setting, which could significantly impair motivation. Since many of the individuals employed in the early education sector are women, addressing this issue is even more important because these individuals are faced with the difficult task of shaping young minds while also dealing with the problems associated with the actual physical care of very young children. The quality of professionals in this sector is vital because it impacts the growth and development of the children that they care for. The degree of invol...
6 Pages(1500 words)Coursework
sponsored ads
Save Your Time for More Important Things
Let us write or edit the case study on your topic "Application of Criminological Theory" with a personal 20% discount.
GRAB THE BEST PAPER

Let us find you another Case Study on topic Application of Criminological Theory for FREE!