Comments (0)
Add to wishlistDelete from wishlist
Cite this document
Summary
Q: I was wondering if you could describe your classroom setting in relation to children's books. For instance, how many children's books you have, whether they are display, can the students access them freely and things like that.
A: I've been teaching at the elementary level since 1993 and have been teaching kindergarten for the last seven years…
Download full paperFile format: .doc, available for editing
HIDE THIS PAPERGRAB THE BEST PAPER97.6% of users find it useful 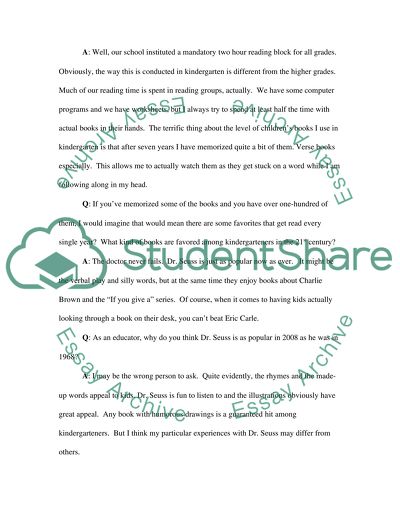 Download file to see previous pages I've never a full count of them, but my estimate would be that I personally own at least 150 different children's books. That includes picture books as well as reading books. Most of them are display in various locations around my classroom simply because I think it does children so much value just to actually see books because they may not have any at home. Especially the kids who come to my school because we live in a low-income area where 95% the students throughout the school qualify for free lunch. Since they are kindergarteners, most of the books they actually pick up are picture books or have limited vocabulary.
A: Well, our school instituted a mandatory two hour reading block for all grades. Obviously, the way this is conducted in kindergarten is different from the higher grades. Much of our reading time is spent in reading groups, actually. We have some computer programs and we have worksheets, but I always try to spend at least half the time with actual books in their hands. The terrific thing about the level of children's books I use in kindergarten is that after seven years I have memorized quite a bit of them. Verse books especially. This allows me to actually watch them as they get stuck on a word while I am following along in my head.
Q: If you've memorized some of the books and you have over one-hundred of them, I would imagine that would mean there are some favorites that get read every single year What kind of books are favored among kindergarteners in the 21st century
A: The doctor never fails. Dr. Seuss is just as popular now as ever. It might be the verbal play and silly words, but at the same time they enjoy books about Charlie Brown and the "If you give a" series. Of course, when it comes to having kids actually looking through a book on their desk, you can't beat Eric Carle.
Q: As an educator, why do you think Dr. Seuss is as popular in 2008 as he was in 1968
A: I may be the wrong person to ask. Quite evidently, the rhymes and the made-up words appeal to kids. Dr. Seuss is fun to listen to and the illustrations obviously have great appeal. Any book with humorous drawings is a guaranteed hit among kindergarteners. But I think my particular experiences with Dr. Seuss may differ from others.
Q: Could others learn from your experience Do you think this experience with Dr. Seuss is something that could be translated into a standard lesson plan or curricula
A: The way I deal with rhyming books and Seuss in general is not something that I would consider standardizing. You have to have a flair for the dramatic and even a certain willingness to kind of make a fool of yourself, I guess. The language and fun and humor of Seuss in particular, but most kindergarten-level rhyming book in general, may appeal to contemporary students even more than students in 1968 or 1988. The rhythm of these books is instantly recognizable to most of my students, and probably every American student, as a form of rap. So, even though I'm not a fan of rap music or consider myself a great rapper, I know I can reach these students by turning Dr. Seuss into a rap song. Any ...Download file to see next pagesRead More
Share:
Tags
Cite this document
(“Childrens Literature Interview Essay Example | Topics and Well Written Essays - 1000 words”, n.d.)
Childrens Literature Interview Essay Example | Topics and Well Written Essays - 1000 words. Retrieved from https://studentshare.org/miscellaneous/1503908-childrens-literature-interview

Although there are several major themes to be followed throughout the book, Vonnegut portrays his characters in such a way as to paint revenge as an integral part of the storyline. It is revenge that drives several of the characters to their actions in both war and peacetime and it is revenge that is presented as the motivation behind the Allied firestorm in Dresden. To fully understand the key roles revenge takes within the novel as it is shown through the actions of the characters and the various communities involved, it is also important to understand some basic ‘real-world’ understandings regarding the emotional act of revenge from a philosophical and psychological point of view. Vonnegut, a prolific and celebrated...
13 Pages(3250 words)Book Report/Review

In contrast to other writers of his generation, Tolstoy was connected with noble families of the Russian aristocracy, who had brilliant French pronunciation and manners. At the same time, he was a person full of antagonism. Whe...
8 Pages(2000 words)Term Paper

In 1918, William Faulkner attempted to become a pilot for the U.S. Army but was turned down because of his height. He “never stood taller than five feet, six inches tall” (Padgett 1). He never gave up and traveled to Toronto, Canada where he posed as an English national and was admitted to the Royal Canadian Air Force (EGS 2). He then traveled to France with this force, though, when they reached France, the war had ended. (EGS 3)
From 1919 until 1921, after returning to the U.S, William Faulkner attended the University of Mississippi, where he wrote for the school’s newspaper, as well as his hometown’s newspaper. (EGS 3).He also drafted his first play that was presented by the university’s drama...
7 Pages(1750 words)Literature review
sponsored ads
Save Your Time for More Important Things
Let us write or edit the essay on your topic "Childrens Literature Interview" with a personal 20% discount.
GRAB THE BEST PAPER

Let us find you another Essay on topic Childrens Literature Interview for FREE!