Comments (0)
Add to wishlistDelete from wishlist
Cite this document
Summary
The Tokugawa Shogunate (1603- 1868) was a feudally structured military dictatorship that ruled Japan for a little over 350 years. This dictatorship was established by Tokugawa Leyasu, a shogun (a shogun was the supreme commander of the 'Samurai'; samurai refers to a soldier or the warrior class)…
Download full paperFile format: .doc, available for editing
HIDE THIS PAPERGRAB THE BEST PAPER96.7% of users find it useful 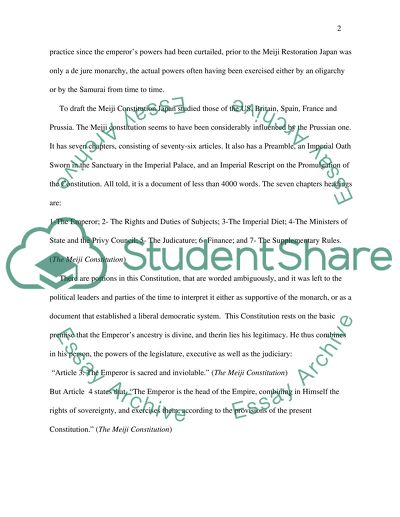 Download file to see previous pages The Meiji Restoration heralded the rise of Japan as an industrial and military power. The oligarchy consolidated itself under the leadership of the Emperor, and made an effort to destroy remaining vestiges of samurai and shogun power. Lands were sought to be restored to the Emperor. The Samurai's privilege to bear arms was diluted by extending this to the peasants, as well, and conscription into the army of a male member from each family in the country also came into effect. The samurai was disgruntled with what it saw as a clipping of its wings. But along with that, they also moved into other areas, seeking employment in the government, and became a new elite in Japan.
It was against the above backdrop that a constitution was promulgated in Japan, and came into effect in 1889. This Constitution enshrined the Emperor as the supreme political head, who shared power with an elected Diet or parliament. The Meiji Constitution continued till Japan was defeated in the Second World War, after which a new constitution came into effect. The Meiji Constitution marks the first time that Japan has had a written constitution. In actual practice since the emperor's powers had been curtailed, prior to the Meiji Restoration Japan was only a de jure monarchy, the actual powers often having been exercised either by an oligarchy or by the Samurai from time to time.
To draft the Meiji Constitution Japan studied those of the US, Britain, Spain, France and Prussia. The Meiji constitution seems to have been considerably influenced by the Prussian one. It has seven chapters, consisting of seventy-six articles. It also has a Preamble, an Imperial Oath Sworn in the Sanctuary in the Imperial Palace, and an Imperial Rescript on the Promulgation of the Constitution. All told, it is a document of less than 4000 words. The seven chapters headings are:
1-The Emperor; 2- The Rights and Duties of Subjects; 3-The Imperial Diet; 4-The Ministers of State and the Privy Council; 5- The Judicature; 6- Finance; and 7- The Supplementary Rules. (The Meiji Constitution)
There are portions in this Constitution, that are worded ambiguously, and it was left to the political leaders and parties of the time to interpret it either as supportive of the monarch, or as a document that established a liberal democratic system. This Constitution rests on the basic premise that the Emperor's ancestry is divine, and therin lies his legitimacy. He thus combines in his person, the powers of the legislature, executive as well as the judiciary:
"Article 3. The Emperor is sacred and inviolable." (The Meiji Constitution)
But Article 4 states that, "The Emperor is the head of the Empire, combining in Himself the rights of sovereignty, and exercises them, according to the provisions of the present Constitution." (The Meiji Constitution)
A subsequent article (55) however stated that the Emperor's powers were subject to ratification by a Minister of State, whose appointment was strangely in the hands of the monarch himself.
The duties and rights of the people were spelt out by the Constitution. A subject had the duty of protecting the Constitution. (Preamble) He also had to serve in the army, if called upon to do so. (Article 20) He enjoyed certain rights, provided these did not come in ...Download file to see next pagesRead More
Share:
Tags
Cite this document
(“Japan Constitution Essay Example | Topics and Well Written Essays - 1250 words”, n.d.)
Japan Constitution Essay Example | Topics and Well Written Essays - 1250 words. Retrieved from https://studentshare.org/miscellaneous/1502977-japan-constitution

CHECK THESE SAMPLES OF Japan Constitution

...Human Resource Management Policies – UK/ Japan If we want to examine effectively the strategies followed in industries of different countries, we should first refer to the role of culture in the differentiation and the development both for the individuals but also for the corporations. According to Soutar, Grainger and Hedges (1999, 203) ‘culture is an important idea as it deals with the way people live and approach problem solving in a social and organizational context’. Moreover ‘what managers do in West Germany, in Britain, in the United States, in Japan or in Brazil is exactly the same. How they do it may be quite different’. The human resource strategies followed by the European countries (i.e. and the UK) were explored by Gooderham...
7 Pages(1750 words)Assignment

...Discuss the introduction of the Euro & the European Constitution in terms of framework, ity & aspirations Like all other world bodies, there was a need to bring all the European nations to a single platform. This was all the more needed because the rulers of the respective nations wanted their own particular identity and this brings us to the question that if they needed such an identity what was the need of having European Union (EU)? They could have easily made a body comprising of two or for that matter three countries and enacted their own policies and gone about it in the long run but bringing all the European nations together to a single platform only means that there was a courteous move behind the very same...
10 Pages(2500 words)Term Paper

Different Organisational Structures of Japan, Germany and the UK

It is for this reason, that the competition in modern markets has become extremely high and the survival of companies within the international commercial marketplace has become a challenging target. On the other hand, the study of Gooderham et al. (1999, 507) proved that “despite their very different assumptions, both rational and institutional explanations of organizational structure and management practices predict similarity among firms that operate in the same industry within the context of a simple country”. In other words, the structural and operational patterns of firms worldwide are similar although significant differences in culture may exist. It should be noticed however that these similarities are limited. T...
13 Pages(3250 words)Assignment

Was Dropping the Bomb on Japan Really Necessary

Had this been done, could the wanton destruction of a predominantly civilian population be avoided? Considering this, it is necessary to question the true motivations of President Truman in his authorization of the bombs’ use. Was it actually to bring about a swift end to the protracted deadly conflict and ultimately intended to save lives, American and Japanese, that would be lost in an overland confrontation? Or was it, as has been suggested, more a decision based on keeping the Soviet Union from having any input regarding the division of post-war Asia as it had in dividing post-war Europe? Even if the first bomb, dropped on Hiroshima could be argued as justifiable, the widespread destruction and collateral damage was deva...
9 Pages(2250 words)Assignment

The Meiji Restoration in Japan

According to the familiar version of the history of the period 1864-68, Britains role went much further than mere involuntary influence and included deliberate moral and material support for the proponents of an Imperial Restoration1

At the rise of the Meiji period, a lot of Asian nations, as well as Japan were being taken over by Western powers; they were even forced to sign treaties that were of economical as well as legal benefits for the Western powers. An example of that era was the extra-territoriality, in which the western powers had the right to force their own laws to their nationals who were residing in Japan. These were forced to the Japanese by means of military and social power. Because of this Japan became...

However, the purpose of our government is not subjective, and it is not unwritten or buried somewhere in the philosophical musings of a Greek theorist. The purpose of government, specifically our government, as stated by Thomas Jefferson in the Declaration of Independence, is “to secure these [natural] Rights, Governments are instituted among Men, deriving their just powers from the consent of the governed…” Our government exists to protect individual, negative rights that exist outside the common law. Whenever a force, whether in a society or from outside it, threatens the rights of citizens, it is the responsibility of their government to take action and protect them from violations. There are many forces that...
9 Pages(2250 words)Assignment

The Industrial Development of Japan

...DEVELOPMENT OF JAPAN What industrial did to development Japan to be a strong nation? INTRODUCTION Industrial development in Japan is one of the biggest reasons for the progress and development of the nation. Japan transformed from an agricultural society as it was in the 19th century into an industrially developed nation. The technological development and innovations changed the tables for the economy. During the process, developments took place in the existing sites and new industrial zones were also developed. With this process, the existing plants were technologically equipped, and new plants were developed. The oil and gas industry and other areas were advanced rapidly which was the need of the society then (Sakoh, 521-548...
6 Pages(1500 words)Literature review

The Effects of the Tsunami in Japan

... How Tsunami Disaster effected Japan’s Economy (March 11, Effects of Tsunami on Japan’s Economy Introduction Japan has a huge economy growth with the base on high technology factories, nuclear power, currency, and food exports. The nation also receives many benefits over the sea such as seafood and shipbuilding technology. Unluckily, Japan is located at the prone nation to occurrence of tsunamis because it sits at the middle of four different plates: Pacific plates, Philippine plates, North America plates, and Eurasian plate. Over years, several numbers of tsunamis have been experienced because the Philippines and Pacific plate are continuously moving below the North America and Eurasian plates. At the result, a danger tsunami was created...
9 Pages(2250 words)Case Study

The Qatari In Indy Club Constitution and By-laws

...The Qatari In Indy (QIN) Constitution and By-laws Article I. The Qatari in Indy Club Qatari In Indy (QIN) shall be an official club that represents the Qatari students in the state of Indiana. QIN shall include students in the cities of Indianapolis, Bloomington and Terre Haute. Qatari In Indy is the official club of Qatari in Indiana, USA. It is a part of the Qatari Student Association in the USA, but does not represent the entire USA student population. Article II. Purpose, Mission and Goal The purpose of the Qatari In Indy (QIN) of Indiana, USA shall be: 1. To promote the Qatari culture to the students. 2. To help both new and current Qatari students with familiarization of the city and its services. 3. To organize events...
6 Pages(1500 words)Assignment
sponsored ads
Save Your Time for More Important Things
Let us write or edit the essay on your topic "Japan Constitution" with a personal 20% discount.
GRAB THE BEST PAPER

Let us find you another Essay on topic Japan Constitution for FREE!