Comments (0)
Add to wishlistDelete from wishlist
Cite this document
Summary
Jus Cogens principle in International Law is the peremptory norm in which each State must observe with utmost good faith. It enjoins States and its leaders to act in accordance with basic principles in international law such as prohibition of using force or aggression against another state or acts which are deemed to be crimes against humanity…
Download full paperFile format: .doc, available for editing
HIDE THIS PAPERGRAB THE BEST PAPER93.4% of users find it useful 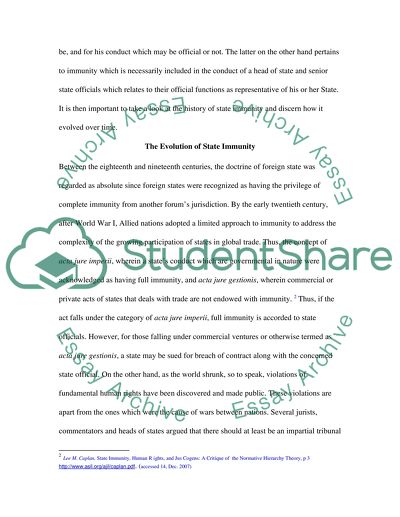 Download file to see previous pages As such, the question whether acts of State officials are applicable to violations of jus cogens is necessary to be tackled in the light of several cases decided by the International Court of Justice (ICJ for brevity) and in recent times, by the International Criminal Court (ICC) under the Rome Statute.
It is well to be emphasized at the outset that under the present generally accepted principles of international law, heads of states and senior state officials are not exempted from the responsibility in the international community for international crimes. 1 Any controversy that may emerge would fall under the jurisdictional question relating to the procedural aspect of the law. Hence, in this paper, several cases would be cited particularly those which sparked heated debates among scholars and imminent jurist in international law. At this juncture, it is worthy to mention the two principles of immunities under international law which are immunity ratione personae and ratione materiae. The former being attributed to the person and it follows him wherever he may be, and for his conduct which may be official or not. The latter on the other hand pertains to immunity which is necessarily included in the conduct of a head of state and senior state officials which relates to their official functions as representative of his or her State. It is then important to take a look at the history of state immunity and discern how it evolved over time.
The Evolution of State Immunity
Between the eighteenth and nineteenth centuries, the doctrine of foreign state was regarded as absolute since foreign states were recognized as having the privilege of complete immunity from another forum's jurisdiction. By the early twentieth century, after World War I, Allied nations adopted a limited approach to immunity to address the complexity of the growing participation of states in global trade. Thus, the concept of acta jure imperii, wherein a state's conduct which are governmental in nature were acknowledged as having full immunity, and acta jure gestionis, wherein commercial or private acts of states that deals with trade are not endowed with immunity. 2 Thus, if the act falls under the category of acta jure imperii, full immunity is accorded to state officials. However, for those falling under commercial ventures or otherwise termed as acta jure gestionis, a state may be sued for breach of contract along with the concerned state official. On the other hand, as the world shrunk, so to speak, violations of fundamental human rights have been discovered and made public. These violations are apart from the ones which were the cause of wars between nations. Several jurists, commentators and heads of states argued that there should at least be an impartial tribunal which would render judgment upon persons accused of war and crimes against humanity. The concept of state immunity was thus regarded as applicable only to those acts of states which do not transgress norms which are regarded as necessary to attain order in the international community. Consequently, several statutes were enacted and tribunals were established precisely to address the growing concern of the states about serious violations of peremptory norms, from which violators would only invoke state immunity to avoid punishment. At present, State immunity is not regarded as an absolute state right under the international law. Instead, state immunity ...Download file to see next pagesRead More
Share:
Tags
Cite this document
(“Are immunities of senior state officials applicable to jus cogens Essay”, n.d.)
Are immunities of senior state officials applicable to jus cogens Essay. Retrieved from https://studentshare.org/miscellaneous/1502540-are-immunities-of-senior-state-officials-applicable-to-jus-cogens-violations

“Are Immunities of Senior State Officials Applicable to Jus Cogens Essay”, n.d. https://studentshare.org/miscellaneous/1502540-are-immunities-of-senior-state-officials-applicable-to-jus-cogens-violations.
Comments (0)
Click to create a comment or rate a document

Is The State as Actor Losing Its Primacy in International System

With the evolution of humans and territories, new political setups or governance came into being with set rules and regulations, to rule cities, provinces or states and important countries. Most or some of those set rules and regulations to govern countries are brought out as a result of treaties. So, a treaty (an agreement officially signed by countries, international organizations, etc) allows certain actions and restricts certain other actions for the effective functioning of the countries. So, this paper will analyze whether Austria has abided by the Austrian State Treaty and its policy on neutrality while dealing with the conflict in Bosnia, and during its entry into the European Union and its aftermath.
In the post Seco...
6 Pages(1500 words)Term Paper

... with the federal system. This was, to some degree, the result of state constitutional implementation as well as the emerging strength of the Supreme Court, which interpreted matters of constitutional import that were applicable to the states. Despite the fact that many modern Americans tend to see the Supreme Court as the primary emblem of the nation’s judicial system, that “Court is only one tribunal among many and both lower federal courts and state courts contribute significantly to the operation of our federal system…[as they] perform the painstaking tasks necessary to the day-by-day adjustment of federal-state judicial relations (Wendell, 1949, p. 5). The purpose of this paper is to discuss the evolution of the state courts...
7 Pages(1750 words)Assignment
sponsored ads
Save Your Time for More Important Things
Let us write or edit the essay on your topic "Are immunities of senior state officials applicable to jus cogens violations" with a personal 20% discount.
GRAB THE BEST PAPER

Let us find you another Essay on topic Are immunities of senior state officials applicable to jus cogens violations for FREE!