Comments (0)
Add to wishlistDelete from wishlist
Cite this document
Summary
Thaksin Shinawatra was born on July 26, 1949 in Chieng Mai, Thailand. The former Prime Minister of Thailand and leader of the populist Thai Rak Thai Party, he currently lives in exile in London, and he is also the owner of the English football club Manchester City…
Download full paperFile format: .doc, available for editing
HIDE THIS PAPERGRAB THE BEST PAPER98.3% of users find it useful 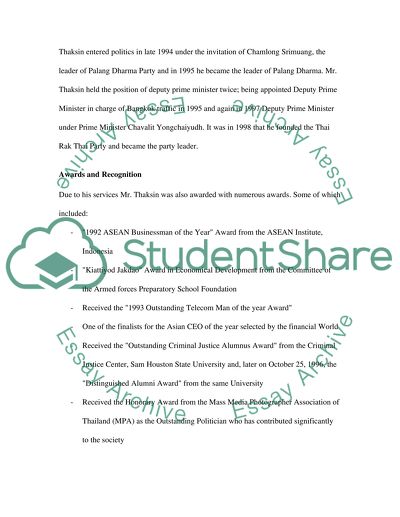 Download file to see previous pages Later in 1978 he received a doctorate degree in criminal justice from Sam Houston State University Texas.
Worked in the Royal Thai Police Department for 14 years and retired as a Lieutenant Colonel in 1987. His last position was Deputy Superintendent of the Policy and Planning Sub-division, General Staff Division, Metropolitan Police Bureau.
After resigning from Royal Thai Police and with several failed business ventures in 1987 Mr. Thaksin started his own business Shinawatra Computer and Communications Group. Mr. Thaksin later resigned from the post of Chairman of the Board of Directors, Shinawatra Computer and Communications Public Company Limited
Thaksin entered politics in late 1994 under the invitation of Chamlong Srimuang, the leader of Palang Dharma Party and in 1995 he became the leader of Palang Dharma. Mr. Thaksin held the position of deputy prime minister twice; being appointed Deputy Prime Minister in charge of Bangkok traffic in 1995 and again in 1997 Deputy Prime Minister under Prime Minister Chavalit Yongchaiyudh. It was in 1998 that he founded the Thai Rak Thai Party and became the party leader.
Received the "Outstanding Criminal Justice Alumnus Award" from the Criminal Justice Center, Sam Houston State University and, later on October 25, 1996, the "Distinguished Alumni Award" from the same University
As it stands Mr.
Received the Honorary Award from the Mass Media Photographer Association of Thailand (MPA) as the Outstanding Politician who has contributed significantly to the society
As it stands Mr. Thaksin was an extremely popular political leader. His dynamic entrepreneurial vision allowed him to establish a huge transnational business conglomerate and in ten years become one of the wealthiest individuals in Southeast Asia and the world. He twice won landslide elections - in 2001 and 2005 - with his party performing better than any in history. In fact, he is the only Thai prime minister to have completed a full four-year term after an election. Thaksin's distinctive economic, public health, education, energy, drugs and international relations policies made him the first elected Prime Minister in Thai history to complete his term in office, and helped him win a landslide re-election in 2005. (New York Times, 2006)
After the creation of Thai Rak Thai, it was his enormous financial resources that allowed him to attract many accomplished and popular local politicians to his party. With a belief of populism and a strong emphasis on directing more funds to rural areas and communities, Thai Rak Thai developed a strong rural base in Thailand.
The populist economic policy which was also termed "Thaksinomics." included novel programs such as "One Tambol, One Product," a highly successful program aimed to encourage each sub-district to develop a product in which it had a singular competitive advantage and ...Download file to see next pagesRead More
Share:
Tags
Cite this document
(“Leadership Profile Essay Example | Topics and Well Written Essays - 1000 words”, n.d.)
Leadership Profile Essay Example | Topics and Well Written Essays - 1000 words. Retrieved from https://studentshare.org/miscellaneous/1502145-leadership-profile

CHECK THESE SAMPLES OF Leadership Profile

According to Burns (1978) and Bass (1985), transformational leadership has a set of category constructs such as values, morals, farsightedness, long term goals, principles, acute awareness about the dividing line between causes and symptoms, mission statements, strategic perspectives, and human resources. Similarly, they identify a set of category constructs in the transactional leadership also. For instance concentration on the task at hand, short term goals and tactics, confusion co...
6 Pages(1500 words)Coursework
sponsored ads
Save Your Time for More Important Things
Let us write or edit the essay on your topic "Leadership Profile" with a personal 20% discount.
GRAB THE BEST PAPER

Let us find you another Essay on topic Leadership Profile for FREE!