Comments (0)
Add to wishlistDelete from wishlist
Cite this document
Summary
The profession of policing is difficult in itself but when the idea of ethics is introduced it makes this concept even more demanding.There are times when enforcing these societal norms of order have to be done by means that are questionable…
Download full paperFile format: .doc, available for editing
HIDE THIS PAPERGRAB THE BEST PAPER91.4% of users find it useful 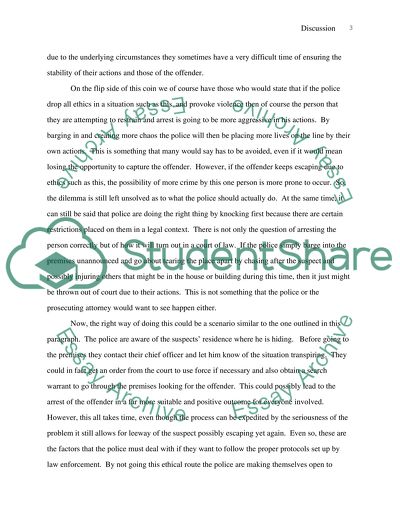 Extract of sample "Ethics of Policing:Knocking Before Entering"

“Ethics of Policing:Knocking Before Entering Essay”, n.d. https://studentshare.org/miscellaneous/1501990-a-discussion-on-the-ethics-of-policing.
Comments (0)
Click to create a comment or rate a document

CHECK THESE SAMPLES OF Ethics of Policing:Knocking Before Entering

...PART A Question a) Why is it important for an organization to have a of ethics? of ethics provides an essential channel to carry out day-to-day decision making at organizational work. It explains the foundation of your organization, its aims, standards and mainly helping your employees recognize how these foundations interpret into day to day decisions, behaviors and dealings. Some people may think that codes of ethics are proposed to bound one’s actions, the most excellent codes of ethics are in fact structured to liberate and authorizes people to create additional efficient judgments with greater self-confidence. An organization uses efficient code of ethics for many purposes: although two important ones are: A code of ethics should 1...
13 Pages(3250 words)Assignment

... followed unethical means to realize study objective and have become textbook examples of unethical research study, one such study being the Tuskegee Study of Untreated Syphilis (Angell, 1997). The Tuskegee Study of Untreated Syphilis is widely considered as one of the most horrific studies in which the basic ethics of conduct has been totally disregarded. The study was based on the hypothesis that black and white people differed in their response to the disease. Before the study was initiated in 1928, the U.S Public Health Services (PHS) had already completed a study in Mississippi in which 25% of the participants who were all black had tested positive for the disease. The PHS intended to expand and continue the study in rural black...
7 Pages(1750 words)Essay
sponsored ads
Save Your Time for More Important Things
Let us write or edit the essay on your topic "Ethics of Policing:Knocking Before Entering" with a personal 20% discount.
GRAB THE BEST PAPER

Let us find you another Essay on topic Ethics of Policing:Knocking Before Entering for FREE!