Comments (0)
Add to wishlistDelete from wishlist
Cite this document
Summary
Marketing is an important ingredient for any organization to achieve its goals, mission and its objectives set by it at the commencement of the business or at every annual review meeting of the board of directors. Proctor (2000) states that marketing is all about satisfying customer wants and needs and simultaneously facilitating the achievement of organizations objectives.1 The present changing and high competitive world, it is essential that hotels spot the available opportunity in the market…
Download full paperFile format: .doc, available for editing
HIDE THIS PAPERGRAB THE BEST PAPER97.6% of users find it useful 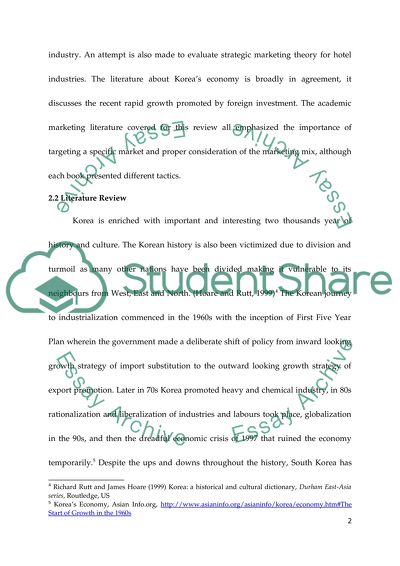 Download file to see previous pages According to the 2005 reports, there was influx of tourists from abroad at an increase of around 3.5% at 6.02 million than that of previous year 2004.3
The present chapter assumes to identify key literatures, articles and journals to study the economic situation in South Korean and the market for the hotel industry. An attempt is also made to evaluate strategic marketing theory for hotel industries. The literature about Korea's economy is broadly in agreement, it discusses the recent rapid growth promoted by foreign investment. The academic marketing literature covered for this review all emphasized the importance of targeting a specific market and proper consideration of the marketing mix, although each book presented different tactics.
Korea is enriched with important and interesting two thousands year of history and culture. The Korean history is also been victimized due to division and turmoil as many other nations have been divided making it vulnerable to its neighbours from West, East and North. (Hoare and Rutt, 1999)4 The Korean journey to industrialization commenced in the 1960s with the inception of First Five Year Plan wherein the government made a deliberate shift of policy from inward looking growth strategy of import substitution to the outward looking growth strategy of export promotion. Later in 70s Korea promoted heavy and chemical industry, in 80s rationalization and liberalization of industries and labours took place, globalization in the 90s, and then the dreadful economic crisis of 1997 that ruined the economy temporarily.5 Despite the ups and downs throughout the history, South Korea has emerged has winner and one of the Asian superpower in the region. Due to its rich heritage and cultural background, it is not surprising that Korea is a much sought after tourist destination which provides ample employment opportunities to the Korean in field of hospitality sector.
Kim, Shin and Chon (1998) state that the South Korean hotel industry has finally reached its peak after more than two decades of rapid growth in tourism following the Summer Olympic Games, and had begun to taper off at the time of writing. (http://www.allbusiness.com) Min, Min and Emam, (2002) contradicts with Kim, Shin and Chon (1998), in 1998 there was not a tapering off instead tourism grew up to 2002. As the South Korea's tourism revenue increased, the hotel industry also expanded its capacity very much by increasing the number of guest rooms and building new hotels. It has led to over building of hotels subsequently competition among hotels has increased. Thus, Hotels continue to seek new way to increase their market share in changing markets. The hotel sector has been chosen for this study because the hotel industry comprises one of the largest sectors of the tourism and hospitality industry in terms of capital investment and tourist expenditure, and hotels are major foreign currency earners (Kim and Uysal 1998).
Min, Min and Joo (2008) argue that South Korea's hotel industry in greater danger from competitive threats and ...Download file to see next pagesRead More
Share:
Tags
Cite this document
(“The strategic marketing approaches that could be adopted by the hotel Essay”, n.d.)
The strategic marketing approaches that could be adopted by the hotel Essay. Retrieved from https://studentshare.org/miscellaneous/1501829-the-strategic-marketing-approaches-that-could-be-adopted-by-the-hotel-industry-in-songdo-in-south-korea

“The Strategic Marketing Approaches That Could Be Adopted by the Hotel Essay”, n.d. https://studentshare.org/miscellaneous/1501829-the-strategic-marketing-approaches-that-could-be-adopted-by-the-hotel-industry-in-songdo-in-south-korea.
Comments (0)
Click to create a comment or rate a document

... & Blinder, 2008, p.162). In particular, the digital era fuelled novel business opportunities and the continuous evolution of online business channels has made multi-channel retailing a reality, with the customer now placed at the forefront of business strategy. In turn this has reshaped business distribution and marketing models. This has propagated discussion with regard to the need for businesses to adopt customer relationship oriented approach in order to create value in marketing. For example, Weinberg at al’s recent report into changing consumer behaviour highlights that approximately 65-70% of consumers fall within the category of “multichannel shoppers” and increasingly have the highest purchasing power (Weinberg et al, 2007...
13 Pages(3250 words)Assignment
sponsored ads
Save Your Time for More Important Things
Let us write or edit the essay on your topic "The strategic marketing approaches that could be adopted by the hotel industry in Songdo in South Korea" with a personal 20% discount.
GRAB THE BEST PAPER

Let us find you another Essay on topic The strategic marketing approaches that could be adopted by the hotel industry in Songdo in South Korea for FREE!