Comments (0)
Add to wishlistDelete from wishlist
Cite this document
Summary
The trade union membership has sharply declined in the UK during the period of 1979 to 2005, from 14 to 8 million members. There are several reasons for this, which will be considered in the present paper, with the describing of possible influence of this reduction on the employment relations.
…
Download full paperFile format: .doc, available for editing
HIDE THIS PAPERGRAB THE BEST PAPER93.4% of users find it useful 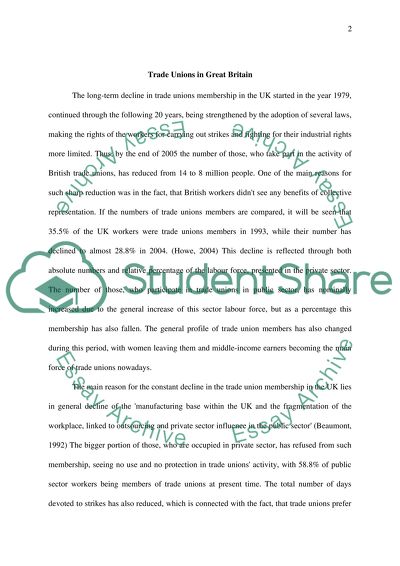 Download file to see previous pages Thus, by the end of 2005 the number of those, who take part in the activity of British trade unions, has reduced from 14 to 8 million people. One of the main reasons for such sharp reduction was in the fact, that British workers didn't see any benefits of collective representation. If the numbers of trade unions members are compared, it will be seen that 35.5% of the UK workers were trade unions members in 1993, while their number has declined to almost 28.8% in 2004. (Howe, 2004) This decline is reflected through both absolute numbers and relative percentage of the labour force, presented in the private sector. The number of those, who participate in trade unions in public sector, has nominally increased due to the general increase of this sector labour force, but as a percentage this membership has also fallen. The general profile of trade union members has also changed during this period, with women leaving them and middle-income earners becoming the main force of trade unions nowadays.
The main reason for the constant decline in the trade union membership in the UK lies in general decline of the 'manufacturing base within the UK and the fragmentation of the workplace, linked to outsourcing and private sector influence in the public sector' (Beaumont, 1992) The bigger portion of those, who are occupied in private sector, has refused from such membership, seeing no use and no protection in trade unions' activity, with 58.8% of public sector workers being members of trade unions at present time. The total number of days devoted to strikes has also reduced, which is connected with the fact, that trade unions prefer devoting less time to strikes, but solving the major problems, without going into details. It is also forecast, that the amount of time, devoted to the strikes, and thus to breaks in working process, will continue to decrease. Speaking about the other reasons membership decline, the following reasons should be taken into account:
- a considerable portion of those who represent labour force in the UK is constituted by migrants, who look for jobs on temporary basis and thus have the following reasons not to join the unions:
a. the temporary nature of jobs these people prevents them from joining any trade union on the constant basis;
b. such workers mostly work for the agencies, and not directly for their employers, which also prevents them from joining a trade union;
c. the wages these workers earn are often so low, that the subscriptions they have to pay appear to be excessive for them. Migrants often move from one factory to another and thus they are difficult to be organized. Moreover, together with those, who work on a constant basis, they become very skeptical as for the possible positive role of trade unions in their employment relations. (Howe, 2004)
Thus, it is clear that nowadays workers underestimate the role of trade unions in protecting their rights, refusing from membership. As Gall (1994) writes,
'Unions are painfully aware of the need to recruit new and younger members to reverse the decline in membership that has continued for over a decade. The changing nature of the workplace, with a decline in manufacturing and an increasingly fragmented and globalized workforce, is creating difficulties for trade unions which they are finding hard to meet. The sustained declining trend is a little surprising given legislation passed in recent years ...Download file to see next pagesRead More
Share:
Tags
Cite this document
(“Trade Unions in Great Britain Essay Example | Topics and Well Written Essays - 2000 words”, n.d.)
Trade Unions in Great Britain Essay Example | Topics and Well Written Essays - 2000 words. Retrieved from https://studentshare.org/miscellaneous/1501672-trade-unions-in-great-britain

CHECK THESE SAMPLES OF Trade Unions in Great Britain

...? Trade Unions in Britain Trade unions in Britain Trade unions are organizations of workers that have come together with the purposes of achieving common goals. The common goals include better working conditions and better salaries. Through its leadership, the trade unions engage in negotiations with the employers on behalf of the employees a process known as collective bargaining. The trade unions are therefore an important aspect of the business world as they ensure that there are smooth relationships between employers and employees which in turn creates a harmonious working environment which ensures the smooth sailing of the business activities. The trade unions in Britain traditionally had a system in which the bargaining was based...
7 Pages(1750 words)Essay

Austria or you may call is the Republic of Austria in official terminology is located in Central Europe. Although the population figures do not touch the danger limit but the talent and resources are worthwhile there. Germany and Hungry are also near this region. Italy is in the south of Austria. Switzerland will be seen in the west. So, now you can realize the importance of this region clearly.
The GDP is also impressive here. You can say the economy is strong and it has much depth. The strong social market economy is the result of development and proper management by the government (DArt & Turner 2008). Traders find flexibility in business operations. Labor has a positive approach to work and jobs.
There was a tren...
9 Pages(2250 words)Term Paper
sponsored ads
Save Your Time for More Important Things
Let us write or edit the essay on your topic "Trade Unions in Great Britain" with a personal 20% discount.
GRAB THE BEST PAPER

Let us find you another Essay on topic Trade Unions in Great Britain for FREE!