Comments (0)
Add to wishlistDelete from wishlist
Cite this document
Summary
I am working in this company from last nine years and having the responsibility for the management of the medical product Allround. The management is being composed of all factors from manufacturing to its consumer satisfaction. Though, I take care of different attributes through out last nine years with respect to the management of this product…
Download full paperFile format: .doc, available for editing
HIDE THIS PAPERGRAB THE BEST PAPER96.9% of users find it useful 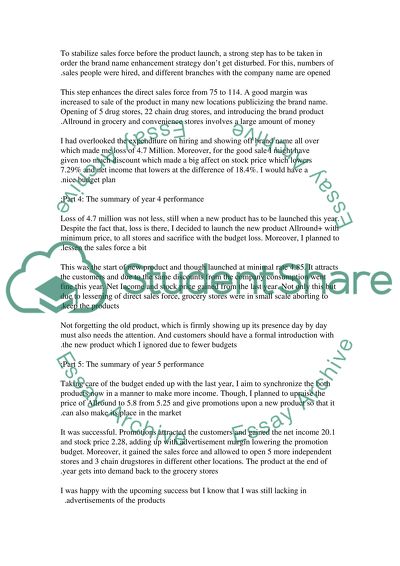 Download file to see previous pages Keeping the quality maintained it was necessary to take a step which leads to make the standardize space in market for the brand and though I lowered the retail selling price of this product to 5.25. It isn't a big loss but a nice way to attract consumers to use this product.
It wasn't a bad decision, as per my decision to lower down the price for attracting more customers becomes true to the fact that sale price raised from 102.1 to 119.7, net income raised from 67.2 to 99.6 and stock price move up from 38.35 to 51.89.
It was a nice and successful decision as at the end of year the brand was known among customers and made its fix place in the market. But, as nobody is perfect, I missed the advantage of consumers i.e., I forgot to fix the budget in a manner that consumers may get good allowance as well.
It was the time to satisfy the consumers as well before they stop requesting for the brand. As alternatives for every product is available in the market and the vital source to keep the brand name in market is to keep the consumers in hand. Though, I made the decision to satisfy consumers this year sustaining the brand name.
However, things were not stabling but still the brand name was flourishing in the market with upraise of 2.9%. But unfortunately, from market efficiency to consumer satisfaction everything was lowering.
I was still satisfied that my aim to make place in the market till new product introduces was on its advancing stage. But yet to manage the budget and keep other resources satisfied. There I noticed that in deed of gaining name I lost the direct sales force from 94 to 75.
Part 3: The summary of year 3 performance;
To stabilize sales force before the product launch, a strong step has to be taken in order the brand name enhancement strategy don't get disturbed. For this, numbers of sales people were hired, and different branches with the company name are opened.
This step enhances the direct sales force from 75 to 114. A good margin was increased to sale of the product in many new locations publicizing the brand name. Opening of 5 drug stores, 22 chain drug stores, and introducing the brand product Allround in grocery and convenience stores involves a large amount of money.
I had overlooked the expenditure on hiring and showing off brand name all over which made me loss of 4.7 Million. Moreover, for the good sale I might have given too much discount which made a big affect on stock price which lowers 7.29% and net income that lowers at the difference of 18.4%. I would have a nice budget plan.
Part 4: The summary of year 4 performance;
Loss of 4.7 million was not less, still when a new product has to be launched this year. Despite the fact that, loss is there, I decided to launch the new product Allround+ with minimum price, to all stores and sacrifice with the budget loss. Moreover, I planned to lessen the sales force a bit.
This was the start of new product and though launched at minimal rate 4.85. It attracts the customers and due to the same discounts from the company consumption went fine this year. Net Income and stock price ...Download file to see next pagesRead More
Share:
Tags
Cite this document
(“Sales Performance Case Study Example | Topics and Well Written Essays - 1000 words”, n.d.)
Sales Performance Case Study Example | Topics and Well Written Essays - 1000 words. Retrieved from https://studentshare.org/miscellaneous/1500588-sales-performance

CHECK THESE SAMPLES OF Sales Performance

... for each of the firm. If they both play L then the profits would be half of what they would earn if they do not change. Part B The purpose of this essay is to critically analyze the extent to which the efficiency and equity considerations should be taken into account in the Structure-Conduct-Performance Model when it comes to deciding policies for the mergers between large firms. Firstly, the paper talks briefly about the Structure-Conduct-Performance Model and then moves onto discuss the importance of equity and efficiency in policy making for mergers. Introduction According to the Structure-Conduct-Performance Model, the performance of any industry depends on the firms’ conducts in the industry. The Conduct of the firms in turn depends...
6 Pages(1500 words)Essay
sponsored ads
Save Your Time for More Important Things
Let us write or edit the case study on your topic "Sales Performance" with a personal 20% discount.
GRAB THE BEST PAPER

Let us find you another Case Study on topic Sales Performance for FREE!