Comments (0)
Add to wishlistDelete from wishlist
Cite this document
Summary
Such assumptions quite naturally form the basis of positivism and positivist approaches to business research. Positivism is the philosophical system recognizing only positive facts and observable phenomena. It naturally accepts.
An organization which depends solely on ontological beliefs has to at some point embrace epistemological assumptions to survive…
Download full paperFile format: .doc, available for editing
HIDE THIS PAPERGRAB THE BEST PAPER94% of users find it useful 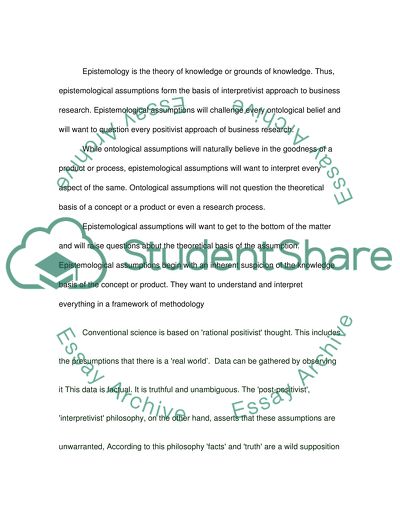 Download file to see previous pages Epistemological assumptions begin with an inherent suspicion of the knowledge
basis of the concept or product. They want to understand and interpret
everything in a framework of methodology
Conventional science is based on 'rational positivist' thought. This includes
the presumptions that there is a 'real world'. Data can be gathered by observing
it This data is factual. It is truthful and unambiguous. The 'post-positivist',
'interpretivist' philosophy, on the other hand, asserts that these assumptions are
unwarranted, According to this philosophy 'facts' and 'truth' are a wild supposition
and 'objective' observation is impossible, and that the act of observation-and-
interpretation is dependent on the perspective adopted by the observer.
Interpretivists criticise even the physical scientists for the narrowness of their
assumptions. Their criticisms hold some truth particularly strongly in the social
sciences, where the objects of study are influenced by so many factors. These
factors are extremely difficult to isolate and control in experimental laboratory.
This builds up to a requirement that multiple interpretations of the same
phenomena must be allowed for, and that no truth is attainable.
An organization which depends solely on ontological beliefs has to at some point embrace epistemological assumptions to survive. So it sells faith' - the very basis of the philosophy of being. Evangelistical literature or material is published and marketed to influence people of ontological belief into their way of life. Since ontological assumption is based on positivism, the belief that everything being is good, the positivist approach quite easily gets affected by such marketing ventures. To them pictures of God or human beings in reverence, Biblical stories...
To them pictures of God or human beings in reverence, Biblical stories and incidents hold an incredible position of awe.
be made attributable to the purpose of collection. Similarly, the data collated in terms of cases individuals or groups runs the risk of the age factor being misrepresented which amounts to a great deal of confusion. In such a scenario greater credence is given to the written word.
...Download file to see next pagesRead More
Share:
Tags
Cite this document
(“Research methods (Evangelistical literature) Essay”, n.d.)
Research methods (Evangelistical literature) Essay. Retrieved from https://studentshare.org/miscellaneous/1499528-research-methods-evangelistical-literature

8 Pages(2000 words)Article
sponsored ads
Save Your Time for More Important Things
Let us write or edit the essay on your topic "Research methods (Evangelistical literature)" with a personal 20% discount.
GRAB THE BEST PAPER

Let us find you another Essay on topic Research methods (Evangelistical literature) for FREE!