Comments (0)
Add to wishlistDelete from wishlist
Cite this document
Summary
Over the past decades, the way in which people are managed and motivated has become the primary field of interest in terms of assessing and improving organizational efficiency and marketability. The reason for such turn is evident: growing competitiveness in the market forces modern companies to increasingly rely on skilled and motivated personnel then on pure technologies and products.
…
Download full paperFile format: .doc, available for editing
HIDE THIS PAPERGRAB THE BEST PAPER94.9% of users find it useful 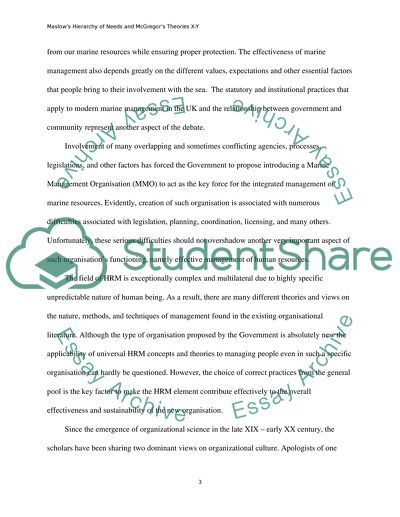 Extract of sample "McGregor's Theories and Maslow's Hierarchy of Needs"

Download file to see previous pages The same principle is valid for non-business organisations: their success also depends on the management's ability to effectively implement the right solutions to improve motivation and enhance performance of employees.
Improving the effectiveness of marine management has recently turned into one of the most intensively debated topic in the UK. The debate mainly covers strategic issues concerning the effectiveness of the management of the marine environment to maximize sustainable benefits from our marine resources while ensuring proper protection. The effectiveness of marine management also depends greatly on the different values, expectations and other essential factors that people bring to their involvement with the sea. The statutory and institutional practices that apply to modern marine management in the UK and the relationship between government and community represent another aspect of the debate.
Involvement of many overlapping and sometimes conflicting agencies, processes, legislations, and other factors has forced the Government to propose introducing a Marine Management Organisation (MMO) to act as the key force for the integrated management of marine resources. Evidently, creation of such organisation is associated with numerous difficulties associated with legislation, planning, coordination, licensing, and many others. Unfortunately, these serious difficulties should not overshadow another very important aspect of such organisation's functioning, namely effective management of human resources.
The field of HRM is exceptionally complex and multilateral due to highly specific unpredictable nature of human being. As a result, there are many different theories and views on the nature, methods, and techniques of management found in the existing organisational literature. Although the type of organisation proposed by the Government is absolutely new the applicability of universal HRM concepts and theories to managing people even in such a specific organisation can hardly be questioned. However, the choice of correct practices from the general pool is the key factor to make the HRM element contribute effectively to the overall effectiveness and sustainability of the new organisation.
Since the emergence of organizational science in the late XIX - early XX century, the scholars have been sharing two dominant views on organizational culture. Apologists of one paradigm led by Frederick Taylor and Harrington Emerson (School of Scientific Management) believed that organizational culture was just one of the tools to ensure greater control over employees. Representatives of another approach such as Elton Mayo, Abraham Maslow, and Douglas McGregor (Human relations school) postulated that organizational culture was supposed to develop and motivate the employees without excessively rigid control (Schultz, 2002). Which of these approaches better fits the specifics of modern marine management is a very interesting question.
Main Body
Abraham Maslow is one of the brightest representatives of humanistic ...Download file to see next pagesRead More
Share:
Tags
Cite this document
(“McGregor's Theories and Maslow's Hierarchy of Needs Essay”, n.d.)
McGregor's Theories and Maslow's Hierarchy of Needs Essay. Retrieved from https://studentshare.org/miscellaneous/1499164-mcgregors-theories-and-maslows-hierarchy-of-needs

“McGregor's Theories and Maslow'S Hierarchy of Needs Essay”, n.d. https://studentshare.org/miscellaneous/1499164-mcgregors-theories-and-maslows-hierarchy-of-needs.
Comments (0)
Click to create a comment or rate a document

CHECK THESE SAMPLES OF McGregor's Theories and Maslow's Hierarchy of Needs

Although a group develops its own culture, as Wilfred Bion, a renowned psychoanalyst has thoroughly worked on, it is not immune to the surfacing of its members’ individual psychodynamics every so often. This usually creates te...

In the second part of Prolegomena Kant has asked questions on the purity of ‘natural scientific cognition’ which refers to the knowledge of laws based on the natural universal science like “that everything that happens always previously is determined by a cause according to constant laws” and “that substance remains and persists”. Although these natural laws can never be applied to particular things; but they are sometimes applicable to natural objects derived from experiences. However, the actual universal laws should be based on the priority; not on experiences. Kant has also asked the question “How is it possible in general to cognize a priori the necessary conformity to the law of expe...
6 Pages(1500 words)Assignment
sponsored ads
Save Your Time for More Important Things
Let us write or edit the essay on your topic "McGregor's Theories and Maslow's Hierarchy of Needs" with a personal 20% discount.
GRAB THE BEST PAPER

Let us find you another Essay on topic McGregor's Theories and Maslow's Hierarchy of Needs for FREE!