Comments (0)
Add to wishlistDelete from wishlist
Cite this document
Summary
To bring this dispute in depth, a real life example can be introduced. There was wage discrimination between genders. According to BBC (2013), although women are…
Download full paperFile format: .doc, available for editing
HIDE THIS PAPERGRAB THE BEST PAPER95.3% of users find it useful 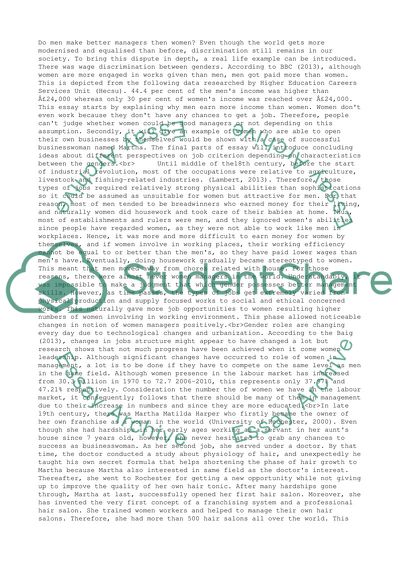 Extract of sample "Do men make better managers then women"

CHECK THESE SAMPLES OF Do men make better managers then women

... colonial America. Margaret Mead, another writer, discusses the role of the society in the development of the society’s behavior and personality in her work Sex and Temperament in Three Primitive Societies. Here, she points out that biology and inheritance have little to do with the personality of both men and women. It is, therefore, true to imply that the society’s perception of the female gender and the resultant oppression of the same are mainly controlled by the cultural conditions of the society, based on the works of the three writers. The beauty myth is discriminative as it tends to be centered only on women. It illustrates how men appear dominant over women and use their influence to suppress women. However, in the Mediterranean...
5 Pages(1250 words)Essay

... if I was expecting a toned down conservative video where there is just singing interspersed with romance, I certainly did not get that. The music video was extremely sensual. The lyrics were most interesting. "This is what a woman wants ,Any man of mine better be proud of me Even when I'm ugly he still better love me And I can be late for a date that's fine But he better be on time Any man of mine'll say it fits just right When last year's dress is just a little too tight And anything I do or say better be okay When I have a bad hair day And if I change my mind A million times I wanna hear him say Yeah, yeah, yeah, yeah, yeah I like it that way"2 . I thought to myself, if more men followed this advice they would not have a problem...
4 Pages(1000 words)Essay

Women - are better listeners than men

...I think women are better listeners than men. Pros Women are usually more sensitive, hence may indeed be more attentive; 2) in the sphere of management, what is called the feminine style of management usually presupposes ability to be a good listener, which may compel women to obey this expectation. Cons: 3) The feminine style of management and, more generally, qualities traditionally associated with women are quite often adopted by men both intentionally and unintentionally; 4) any generalization risks to ignore exceptions, and in the case of the ability to listen the real number of equally attentive men is too great; 5) this statement seems to be mostly prescriptive instead of being descriptive, which bespeaks stereotypic thinking rather...
2 Pages(500 words)Essay

Do Women Have Better Color Vision than Men

...Running Head: DO WOMEN HAVE BETTER COLOR VISION THAN MEN Do Women Have Better Color Vision than Men of Do Women Have Better Color Vision Than Men Color is an important phenomenon - a psychological reaction to brain stimulation. Color vision is the competence of an individual or machine to discriminate materials based on the wavelength of the light they reflect or release. When men and women assemble, they in consequence presents, two worlds-his and hers. They have unique values, precedence and behavior. They take part in by dissimilar rules. Scientists have come to believe that a few basic differences between them are genetic. It turns out that men's and women's brainpower, for instance, are not only unmatched, but the way they make use...
7 Pages(1750 words)Essay

Women can be better leaders than men

During all centuries it has been considered that men are those who win in this unequal battle. I strongly believe that it happens due to the fact that we have been living in the patriarchal society. It can be explained by the fact that up to the 20th century the most important thing both in the life of individual and in life of the whole countries was physical force. The world lived in the state of permanent wartime – the weapon emplacements appeared in the whole world, every time in different places. And the only thing that could contribute to the result of war was men force. Since ancient times men were chosen to be leaders of societies, tribes, droves and countries.
In today’s world that is subordinated not to the physical...
7 Pages(1750 words)Essay

Who makes a better parent Men or women

the children. Thesis statement: Women make a better parent because they are emotionally attached to their children, but without ignoring their responsibilities.
First of all, the importance of parenting in this modern age must be unearthed. Unlike animals, a newborn child is helpless and shows dependency towards its mother. When a calf is born, it can stand up, walk, or even it can run. But it is impossible for a human child. The only thing that it can do is to cry to attract its mother’s attention. So, one can see that the initial stages of a child’s growth and development is strictly limited to the sphere of the intimate care provided by its mother. Gradually, the child attains its adolescent age, teen age, youth and adultho...
5 Pages(1250 words)Essay

... distinctly different from each other. First among these differences would be their physical needs. For instance, women are known to be more concerned about how they look therefore, they spend more time and money on their clothing, accessories and make up. They spend a lot of time thinking about how they would appear so that women often end up spending more money and using more things than men do. For instance, they use make up and accessories that accentuate their natural beauty. On the contrary, men can easily decide on what clothes to buy and wear because they are more concerned about getting dressed. They do not spend too much on make up and accessories not unless they are gay. They also have emotional differences in that women are more...
2 Pages(500 words)Essay

...﻿Women are Better Listeners Women have been playing a vital role in our society. Since the ancient times, they have been the pillar in the society. This is through supporting men who were initially working. Through their listening skills, they were able to listen and advise their men accordingly. This made a major difference between married and unmarried men in the society. To begin with, our mothers have been instrumental in ensuring that decisions made by our fathers do not have any repercussions on our growth and development. Confirming what many women in the society have been suspecting, the new research indicates that men use only half of their brain to listen while women use both. Though the use of a scanning technique known...
4 Pages(1000 words)Essay

...﻿ Women Managers: Female Expatriates Since the beginning of time, man has moved from one place to another in search for better home, more food and better atmosphere. This search has changed in the modern times and today companies and large industries are expanding their offices all-round the globe to get better growth in their organizations. Multinational corporations have paved ways for expansions of their offices for executing operations and procuring projects. Employees of these companies who stay there for longer periods become expats of those countries. These expatriates accept the country as their homes and make sure to execute the operation they have been sent for. Women have been very...
6 Pages(1500 words)Research Paper
sponsored ads
Save Your Time for More Important Things
Let us write or edit the essay on your topic "Do men make better managers then women" with a personal 20% discount.
GRAB THE BEST PAPER

Let us find you another Essay on topic Do men make better managers then women for FREE!