Comments (0)
Add to wishlistDelete from wishlist
Cite this document
Summary
This essay discusses potential dangers of having one super-powerful leader of an organization. Also, it analyses the Harpo case identifies a single power center in Oprah Winfrey and offers the dilemma of whether the company can survive in the absence of Oprah…
Download full paperFile format: .doc, available for editing
HIDE THIS PAPERGRAB THE BEST PAPER96.8% of users find it useful 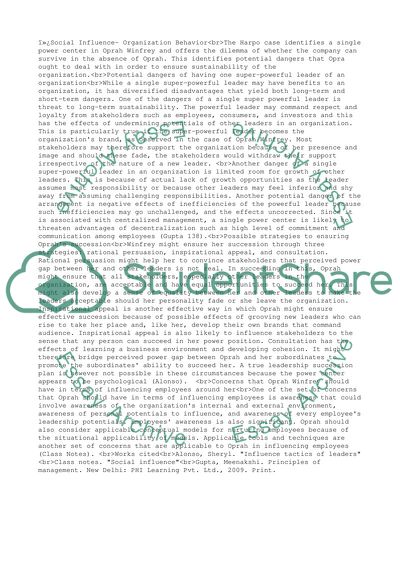 ﻿Social Influence- Organization Behavior
The Harpo case identifies a single power center in Oprah Winfrey and offers the dilemma of whether the company can survive in the absence of Oprah. This identifies potential dangers that Opra ought to deal with in order to ensure sustainability of the organization.
Potential dangers of having one super-powerful leader of an organization
While a single super-powerful leader may have benefits to an organization, it has diversified disadvantages that yield both long-term and short-term dangers. One of the dangers of a single super powerful leader is threat to long-term sustainability. The powerful leader may command respect and loyalty from stakeholders such as employees, consumers, and investors and this has the effects of undermining potentials of other leaders in an organization. This is particularly true if the super-powerful leader becomes the organization’s brand, as observed in the case of Oprah Winfrey. Most stakeholders may therefore support the organization because of her presence and image and should these fade, the stakeholders would withdraw their support irrespective of the nature of a new leader.
Another danger of a single super-powerful leader in an organization is limited room for growth of other leaders. This is because of actual lack of growth opportunities as the leader assumes most responsibility or because other leaders may feel inferior and shy away from assuming challenging responsibilities. Another potential danger of the arrangement is negative effects of inefficiencies of the powerful leader because such inefficiencies may go unchallenged, and the effects uncorrected. Since it is associated with centralized management, a single power center is likely to threaten advantages of decentralization such as high level of commitment and communication among employees (Gupta 138).
Possible strategies to ensuring Oprah’s succession
Winfrey might ensure her succession through three strategies: rational persuasion, inspirational appeal, and consultation. Rational persuasion might help her to convince stakeholders that perceived power gap between her and other leaders is not real. In succeeding in this, Oprah might ensure that all stakeholders, especially other leaders in the organization, are acceptable and have equal opportunities to succeed her. This might also develop a sense of equality between her and other leaders to make the leaders acceptable should her personality fade or she leave the organization. Inspirational appeal is another effective way in which Oprah might ensure effective succession because of possible effects of grooving new leaders who can rise to take her place and, like her, develop their own brands that command audience. Inspirational appeal is also likely to influence stakeholders to the sense that any person can succeed in her power position. Consultation has the effects of learning a business environment and developing cohesion. It might therefore bridge perceived power gap between Oprah and her subordinates to promote the subordinates’ ability to succeed her. A true leadership succession plan is however not possible in these circumstances because the power center appears to be psychological (Alonso).
Concerns that Oprah Winfrey should have in terms of influencing employees around her
One of the set of concerns that Oprah should have in terms of influencing employees is awareness that could involve awareness of the organization’s internal and external environment, awareness of personal potentials to influence, and awareness of every employee’s leadership potentials. Employees’ awareness is also significant. Oprah should also consider applicable conceptual models for nurturing employees because of the situational applicability of models. Applicable tools and techniques are another set of concerns that are applicable to Oprah in influencing employees (Class Notes).
Works cited
Alonso, Sheryl. “Influence tactics of leaders”
Class notes. “Social influence”
Gupta, Meenakshi. Principles of management. New Delhi: PHI Learning Pvt. Ltd., 2009. Print. Read More
Share:
Tags
Cite this document
(“Social Influence- Organization Behavior Case Study”, n.d.)
Retrieved from https://studentshare.org/management/1665905-social-influnce-organization-behavior

...?CORPORATE SOCIAL RESPONSIBILITY INFLUENCE CONSUMERS BEHAVIOR Introduction This is the data analysis chapter where two major activities shall be played by the researcher. These activities are the presentation of data and discussion of data. These two shall be done quantitatively meaning that there shall be the use of numeric indexes with the core employment of calculations undertaken with the use of the SPSS. Data shall also be presented using graphs, charts, figures and tables as and when necessary. Due to the number of variables that are supposed to be presented, the quantitative presentation of each variable shall be followed right on with the discussions on it so that there will not...
20 Pages(5000 words)Dissertation

...of the extreme strengths that she possesses. For instance, a strength that Tilton possesses is her application of power and influence within the firms that she takes over. However, as she states herself, this leads to a type of “benevolent dictatorship”. As such, this has its own negative implications of a leader who accrues absolute power (also referenced in the text as “overleading”) and may lend herself to micromanaging aspects of the firm that would best be left to lower-level management. Likewise, it was a bit disconcerting reading about firms that are on the verge of bankruptcy being toured by their new CEO who is flaunting many tens of thousands of dollars in expensive clothing, cutting edge fashion, and an “8...
3 Pages(750 words)Essay

...? Social Influence on Behavior inserts his/her s Human behavior is often not standalone in nature. A major consideration is, therefore, the social surroundings in which one dwells. Humans are social animals whose behavior is often influenced by and changes in the presence of others. The paper discusses two such instances whereby human behavior is different in the presence of others than what it would be otherwise. The first identifies groupthink as the source of such behavior particularly during crisis situation whereby the limited time available may prohibit humans for relying on cognitive information processing and standalone decisions. The other recognizes the phenomenon of impression management when politicians try to impress... ...
4 Pages(1000 words)Essay

...brainstorming to create the product, all the other works relating to organization and finance fell on Sasha's shoulders. There was too much work to be done and too little resources to help accomplish that. Making use of external talent would have helped reduce the burden on the founders, but outsiders either didn't get along with the founders or they were not able to visualize the project the way the founders did. In any case, working with outsiders didn't seem to be effective and by looking at the initial conversation between Igor and Henry, it didn't look like the founders did anything about analyzing as to why it wasn't effective. The founders were from the same ethnical background and so could relate to each...
3 Pages(750 words)Essay

...Social Influence of Internet and Technology Introduction Internet and technology has brought with it many effects on every aspect of life. Consequently, internet has impact on the social life. These effects are not only on the teenagers but to adults as well. This paper will mainly focus on the positive and negative effects of internet to social life. It will also expound on the difference between the pre-internet era and internet era. Social influence of internet and technology The availability of personal computers with quite cheap prices, introduction of dependable internet services and the setting up of internet cafes has eased the...
2 Pages(500 words)Essay

... the company and stayed with it, he would help it grow not destroy it. If he makes that workplace a chaotic place, he will not just ruin the company itself but also his career in return. Positive outlook in life will attract positive outcome eventually. It may not be visible right away but it will always be noted of. Works Cited: Johns, G. & Saks, A. Organizational Behavior: Understanding and Managing Life at Work (8th Edition). Pearson Education Canada. 2011. Nadler, D. A., Tushman, M. L., & Hatvany, N. G. Managing Organizations: Readings and Cases. Boston: Little, Brown[TT1]. 1982.... Number Section Promotion comes side by side with wage increase. The higher you climb up the company ladder the higher your income would be. In the case of...
2 Pages(500 words)Essay

...ORGANIZATION BEHAVIOR Organization Behavior Organization behavior is an inevitable term in most organizations that have the urge to perform in the best way possible. As such, the term has continuously been used in diverse ways with different definitions to give guidance on how organizations should behave. In a general sense, organization behavior denotes a particular field of study pertaining to the impact that individuals, groups, and organization structure practise in reference to behavior. This behavior further...
1 Pages(250 words)Essay

...to move without being pushed around and this makes it easier for him to achieve more. However, his aggression and egocentric personality makes him harder to work with. Tom is phlegmatic in his personality and he prefers to have a constant life without too many changes. Dick’s personality is melancholic and this is seen in his inability to socialize with people he is not close with. This means that he might not make a good leader but may actually make a loyal employer. 5a Bolman and Deal (2003) described an organization as having four frames which include the following; Structural Frame This includes the mechanics of the organization in the way it works and how the different departments...
4 Pages(1000 words)Case Study

...Discussion #3 – “Eye of the Storm” Discussion #3 – “Eye of the Storm Jane Elliot conducted her room experiment over 40 years ago. Do you think discrimination still occurs in this country? Why or Why Not? Answer: Watching this video, it was a perfect idea for Ms. Jane Elliot to present it to Children in class. The manner in which Ms. Elliot presented the video to her class was indeed creative. After watching the video, “Eye of the storm,” I can say that discrimination still exists in different ways and shapes. People still experience discrimination in schools, companies as well as social gatherings. Discrimination begins at home. If children are brought up by parents who are discriminatory, they will most like adopt this...
2 Pages(500 words)Essay
sponsored ads
Save Your Time for More Important Things
Let us write or edit the case study on your topic "Social Influence- Organization Behavior" with a personal 20% discount.
GRAB THE BEST PAPER

Let us find you another Case Study on topic Social Influence- Organization Behavior for FREE!