Comments (0)
Add to wishlistDelete from wishlist
Cite this document
Summary
Before the establishment of trade unions and the laws that govern them, employee relations were totally different from what they are today. Since their…
Download full paperFile format: .doc, available for editing
HIDE THIS PAPERGRAB THE BEST PAPER94.6% of users find it useful 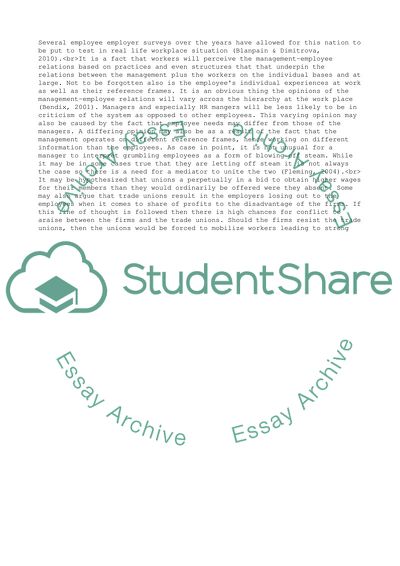 Download file to see previous pages Several employee employer surveys over the years have allowed for this nation to be put to test in real life workplace situation (Blanpain & Dimitrova, 2010).
It is a fact that workers will perceive the management-employee relations based on practices and even structures that that underpin the relations between the management plus the workers on the individual bases and at large. Not to be forgotten also is the employee’s individual experiences at work as well as their reference frames. It is an obvious thing the opinions of the management-employee relations will vary across the hierarchy at the work place (Bendix, 2001). Managers and especially HR mangers will be less likely to be in criticism of the system as opposed to other employees. This varying opinion may also be caused by the fact that employee needs may differ from those of the managers. A differing opinion may also be as a result of the fact that the management operates on different reference frames, hence working on different information than the employees. As case in point, it is not unusual for a manager to interpret grumbling employees as a form of blowing off steam. While it may be in some cases true that they are letting off steam it is not always the case so there is a need for a mediator to unite the two (Fleming, 2004).
It may be hypothesized that unions a perpetually in a bid to obtain higher wages for their members than they would ordinarily be offered were they absent. Some may also argue that trade unions result in the employers losing out to the employees when it comes to share of profits to the disadvantage of the firms. If this line of thought is followed then there is high chances for conflict to araise between the firms and the trade unions. Should the firms resist the trade unions, then the unions would be forced to mobilize workers leading to strong ...Download file to see next pagesRead More
Share:
Tags
Cite this document
(“Compare and contrast managing employment relations with and without Essay”, n.d.)
Compare and contrast managing employment relations with and without Essay. Retrieved from https://studentshare.org/management/1661908-compare-and-contrast-managing-employment-relations-with-and-without-trade-unions

Let us find you another Essay on topic Compare and contrast managing employment relations with and without trade unions for FREE!