Comments (1)
Add to wishlistDelete from wishlist
Cite this document
Summary
In this report about Youssef Said, Russell Hart should include ethical concerns observed to violate company policies. It is important for Russell to differentiate between Youssef Said’s personality and his organizational behavior. There is a cultural clash between the U.S and the Middle East corporate practices…
Download full paperFile format: .doc, available for editing
HIDE THIS PAPERGRAB THE BEST PAPER96.8% of users find it useful 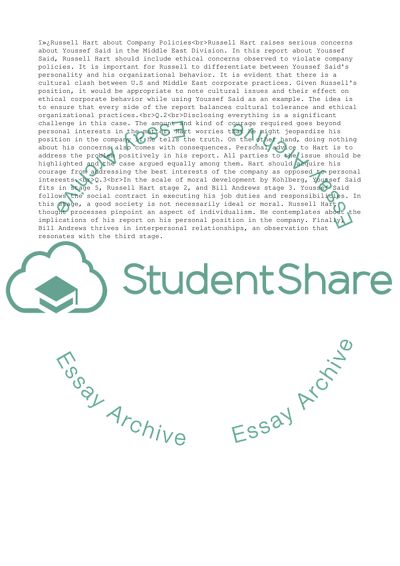 ﻿Russell Hart about Company Policies
Russell Hart raises serious concerns about Youssef Said in the Middle East Division. In this report about Youssef Said, Russell Hart should include ethical concerns observed to violate company policies. It is important for Russell to differentiate between Youssef Said’s personality and his organizational behavior. It is evident that there is a cultural clash between U.S and Middle East corporate practices. Given Russell’s position, it would be appropriate to note cultural issues and their effect on ethical corporate behavior while using Youssef Said as an example. The idea is to ensure that every side of the report balances cultural tolerance and ethical organizational practices.
Q.2
Disclosing everything is a significant challenge in this case. The amount and kind of courage required goes beyond personal interests in the matter. Hart worries that he might jeopardize his position in the company if he tells the truth. On the other hand, doing nothing about his concerns also comes with consequences. Personal advice to Hart is to address the problem positively in his report. All parties to the issue should be highlighted and the case argued equally among them. Hart should acquire his courage from addressing the best interests of the company as opposed to personal interests.
Q.3
In the scale of moral development by Kohlberg, Youssef Said fits in stage 5, Russell Hart stage 2, and Bill Andrews stage 3. Youssef Said follows the social contract in executing his job duties and responsibilities. In this stage, a good society is not necessarily ideal or moral. Russell Hart thought processes pinpoint an aspect of individualism. He contemplates about the implications of his report on his personal position in the company. Finally, Bill Andrews thrives in interpersonal relationships, an observation that resonates with the third stage. Read More
Share:
Tags
Cite this document
(“CASE STUDY Admission/Application Essay Example | Topics and Well Written Essays - 250 words”, n.d.)
Retrieved from https://studentshare.org/management/1660059-case-study

ty
tyrellbernhard added comment 6 months ago
Student rated this paper as
The topic of "Russell Hart about Company Policies" was tough to find. I spent hours to find it. Here at StudentShare, I got the most decent sample. Many thanks!
sponsored ads
Save Your Time for More Important Things
Let us write or edit the admission/application essay on your topic "Russell Hart about Company Policies" with a personal 20% discount.
GRAB THE BEST PAPER

Let us find you another Admission/Application Essay on topic Russell Hart about Company Policies for FREE!