Comments (0)
Add to wishlistDelete from wishlist
Cite this document
Summary
This paper "Current Events in Public Health Leadership and the Fiedler Contingency Theory" focuses on the California whooping cough epidemic is a current event that significantly touches on public health leadership. As at June 24, 2014, the epidemic attacked four thousand, five hundred and fifty-eight persons with one thousand one hundred persons catching it between June 10 and June 24, 2014. …
Download full paperFile format: .doc, available for editing
HIDE THIS PAPERGRAB THE BEST PAPER94.9% of users find it useful 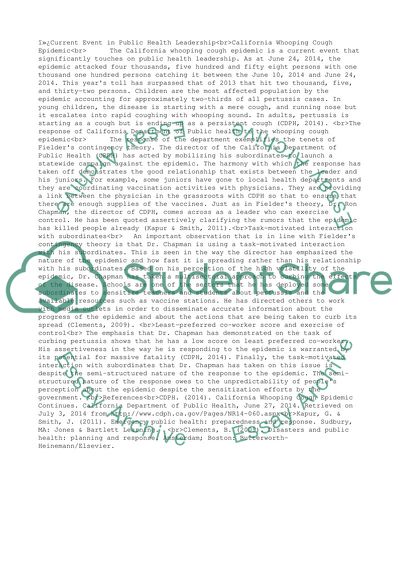 ﻿Current Event in Public Health Leadership
California Whooping Cough Epidemic
The California whooping cough epidemic is a current event that significantly touches on public health leadership. As at June 24, 2014, the epidemic attacked four thousands, five hundred and fifty eight persons with one thousand one hundred persons catching it between the June 10, 2014 and June 24, 2014. This year’s toll has surpassed that of 2013 that hit two thousand, five, and thirty-two persons. Children are the most affected population by the epidemic accounting for approximately two-thirds of all pertussis cases. In young children, the disease is starting with a mere cough, and running nose but it escalates into rapid coughing with whooping sound. In adults, pertussis is starting as a cough but is ending up as a persistent cough (CDPH, 2014).
The response of California Department of Public health to the whooping cough epidemic
The response of the department exemplifies the tenets of Fielder’s contingency theory. The director of the California Department of Public Health (CPDH) has acted by mobilizing his subordinates to launch a statewide campaign against the epidemic. The harmony with which the response has taken off demonstrates the good relationship that exists between the leader and his juniors. For example, some juniors have gone to local health departments and they are coordinating vaccination activities with physicians. They are providing a link between the physician in the grassroots with CDPH so that to ensure that there are enough supplies of the vaccines. Just as in Fielder’s theory, Dr. Ron Chapman, the director of CDPH, comes across as a leader who can exercise control. He has been quoted assertively clarifying the rumors that the epidemic has killed people already (Kapur & Smith, 2011).
Task-motivated interaction with subordinates
An important observation that is in line with Fielder’s contingency theory is that Dr. Chapman is using a task-motivated interaction with his subordinates. This is seen in the way the director has emphasized the nature of the epidemic and how fast it is spreading rather than his relationship with his subordinates. Based on his perception of the high volatility of the epidemic, Dr. Chapman has taken a multisectoral approach to curbing the effects of the disease. Schools are one of the sectors that he has deployed some subordinates to sensitize teachers and students about pertussis and the available resources such as vaccine stations. He has directed others to work with media outlets in order to disseminate accurate information about the progress of the epidemic and about the actions that are being taken to curb its spread (Clements, 2009).
Least-preferred co-worker score and exercise of control
The emphasis that Dr. Chapman has demonstrated on the task of curbing pertussis shows that he has a low score on least preferred co-worker. His assertiveness in the way he is responding to the epidemic is warranted by its potential for massive fatality (CDPH, 2014). Finally, the task-motivated interaction with subordinates that Dr. Chapman has taken on this issue is despite the semi-structured nature of the response to the epidemic. The semi-structured nature of the response owes to the unpredictability of people’s perception about the epidemic despite the sensitization efforts by the government.
References
CDPH. (2014). California Whooping Cough Epidemic Continues. California Department of Public Health, June 27, 2014. Retrieved on July 3, 2014 from http://www.cdph.ca.gov/Pages/NR14-060.aspx
Kapur, G. & Smith, J. (2011). Emergency public health: preparedness and response. Sudbury, MA: Jones & Bartlett Learning.
Clements, B. (2009). Disasters and public health: planning and response. Amsterdam; Boston: Butterworth-Heinemann/Elsevier. Read More
Share:
Tags
Cite this document
(“Current Events in Public Health Leadership and the Fiedler Contingency Assignment - 1”, n.d.)
Current Events in Public Health Leadership and the Fiedler Contingency Assignment - 1. Retrieved from https://studentshare.org/management/1651665-current-events-in-public-health-leadership-and-the-fiedler-contingency-theory

“Current Events in Public Health Leadership and the Fiedler Contingency Assignment - 1”, n.d. https://studentshare.org/management/1651665-current-events-in-public-health-leadership-and-the-fiedler-contingency-theory.
Comments (0)
Click to create a comment or rate a document

...? Public Policy Current Events Analysis PART For a policy to get to the agenda, problems, for example, environmental, are perceived then defined. Services of policy analysts and both formal and informal policy actors are employed. The policy is subsequently formulated, debated, alternatives raised, and then the importance of the policy is analyzed. Policy actors are invited to give their preferred position, so as to legitimize the policy. The appropriateness of the government action is examined, and lastly political support is marshaled. Chesapeake Bay is a crucial waterway. The bay is presently in critical condition and is facing a lot of challenges especially through pollution. Perhaps, the greatest source of pollution arises... of about...
4 Pages(1000 words)Essay

..., 2012). As a result, she restored the financial strength of the company and won numerous accolades. Based on my previous study, I will adopt specific actions to implement the contingency leadership theory into my current leadership approach. Indeed, I will seek to adopt a strategy that will address the needs of all employees locally and across the geographic boundaries. In designing this strategy, I will involve the concerns of the employees and their diversity. I will measure the effectiveness of this approach by analyzing employees’ motivation through their performance and the magnitude as well as the frequency of their complaints. I will also address...
4 Pages(1000 words)Essay

...﻿ Current Events in Public Health Leadership–Servant Leadership Robert Greenleaf initially defined servant leadership philosophy; in his definition, he referred to servant leaders as those that achieve results by attending to needs of the people they serve (Silvia & McGuire, 2010). In the context of public health leadership, servant leader serves others rather than having others to serve him or her. The event prescribed below depicts an instance of servant leadership: A lady suffering from lung cancer attended hospital for three weeks to receive her chemotherapy. During her time in the hospital, she received attendance from a chief nurse and junior nurses who worked under her. In the course of treatment, the chief nurse would come... ...
2 Pages(500 words)Assignment

...operator. There was a need for universal health care to be accepted by polity and the public and her leadership approach may have been initially seen as desirable. However, her failures in her tenure at the health department show the imperative for different kind of public leadership such as authentic leadership and complexity leadership. According to Avolio, Walumbra and Weber (2009), these leadership styles ensure that leaders have the right motivations and visions in addition to the guarantee that leadership fit the needs of specific situation and challenges in which...
2 Pages(500 words)Assignment

...Running Head: Current Events with Leadership Challenges: Hewlett Packard. Department Ethical conduct is very important in the corporate world especially the top organisational leaderships. Leaders must embrace ethics so as not only to inspire followership among staff teams but also for organisational image externally. Hewlett Packard under the leadership of Mark Hurd suffered ethical dilemmas that saw his eventual exit. Prior to this Patricia Dunn also stepped down in response to the scandal involving the company’s spying scandal. Such ethical leadership challenges could negatively impact on the organisation’s corporate image. Following...
1 Pages(250 words)Essay
sponsored ads
Save Your Time for More Important Things
Let us write or edit the assignment on your topic "Current Events in Public Health Leadership and the Fiedler Contingency Theory" with a personal 20% discount.
GRAB THE BEST PAPER

Let us find you another Assignment on topic Current Events in Public Health Leadership and the Fiedler Contingency Theory for FREE!