Comments (0)
Add to wishlistDelete from wishlist
Cite this document
Summary
The reporter states that motivation as a leading aspect is important in the essence that it enables the employees to improve their level, direction, performance and persistence of efforts expended at work. Several scholars have in the past used certain theories to explain the factors that make employees motivated and demotivated at their place of work…
Download full paperFile format: .doc, available for editing
HIDE THIS PAPERGRAB THE BEST PAPER92.8% of users find it useful 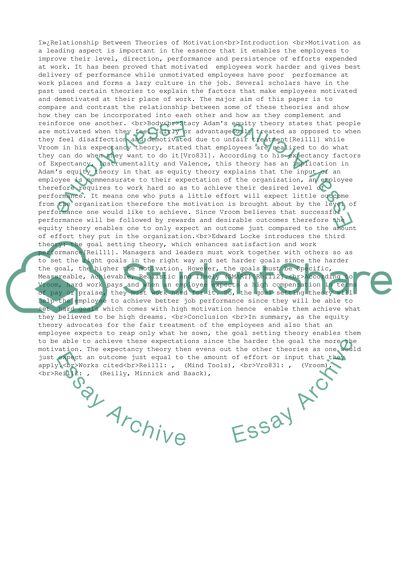 Extract of sample "Relationship Between Theories of Motivation"

﻿Relationship Between Theories of Motivation
Introduction
Motivation as a leading aspect is important in the essence that it enables the employees to improve their level, direction, performance and persistence of efforts expended at work. It has been proved that motivated employees work harder and gives best delivery of performance while unmotivated employees have poor performance at work places and forms a lazy culture in the job. Several scholars have in the past used certain theories to explain the factors that make employees motivated and demotivated at their place of work. The major aim of this paper is to compare and contrast the relationship between some of these theories and show how they can be incorporated into each other and how as they complement and reinforce one another.
Body
Stacy Adam’s equity theory states that people are motivated when they feel fairly or advantageously treated as opposed to when they feel disaffection and demotivated due to unfair treatment[Rei111] while Vroom in his expectancy theory, stated that employees are realized to do what they can do when they want to do it[Vro831]. According to his expectancy factors of Expectancy, Instrumentality and Valence, this theory has an implication in Adam’s equity theory in that as equity theory explains that the input of an employee is commensurate to their expectation of the organization, an employee therefore requires to work hard so as to achieve their desired level of performance. It means one who puts a little effort will expect little outcome from the organization therefore the motivation is brought about by the level of performance one would like to achieve. Since Vroom believes that successful performance will be followed by rewards and desirable outcomes therefore the equity theory enables one to only expect an outcome just compared to the amount of effort they put in the organization.
Edward Locke introduces the third theory: the goal setting theory, which enhances satisfaction and work performance[Rei111]. Managers and leaders must work together with others so as to set the right goals in the right way and set harder goals since the harder the goal, the higher the motivation. However, the goals must be Specific, Measureable, Achievable, Realistic and Timely (SMART)[Rei112].
According to Vroom, hard work pays and when an employee expects a high compensation in terms of pay or praise, they must work hard for it. So, the goal setting theory will help the employee to achieve better job performance since they will be able to set hard goals which comes with high motivation hence enable them achieve what they believed to be high dreams.
Conclusion
In summary, as the equity theory advocates for the fair treatment of the employees and also that an employee expects to reap only what he sown, the goal setting theory enables them to be able to achieve these expectations since the harder the goal the more the motivation. The expectancy theory then evens out the other theories as one would just expect an outcome just equal to the amount of effort or input that they apply.
Works cited
Rei111: , (Mind Tools),
Vro831: , (Vroom),
Rei112: , (Reilly, Minnick and Baack), Read More
Share:
Tags
Cite this document
(“Relationship Between Theories of Motivation Assignment - 78”, n.d.)
Relationship Between Theories of Motivation Assignment - 78. Retrieved from https://studentshare.org/management/1616258-assignment

“Relationship Between Theories of Motivation Assignment - 78”, n.d. https://studentshare.org/management/1616258-assignment.
Comments (0)
Click to create a comment or rate a document

CHECK THESE SAMPLES OF Relationship Between Theories of Motivation

.... Case Study: Sun-2-Shade - Theories of Motivation Case summary The Sun-2-Shade case reflects the situation whereby workers do not feel motivated in spite of the business flourishing, good pay, and a supportive supervisor. The significant descriptive words in the case like the boring job, resenting supervisor help and late-coming clearly point to the estrangement between the supervisor and his workers, who are said to be around his age group (Gen Xers and Millennials). There is an absence of team-spirit, no sense of belonging or accepting responsibility for their lackadaisical attitude. One needs to analyze the case in the light of the theory of motivation vis-à-vis the supervisor’s approach and characteristics of the age group... up...
4 Pages(1000 words)Essay

... and management style respectively. Key words: Motivation, Maslow, Herzberg, McGregor, needs, psychological factors, Theory X, Theory Y, Gen Xers, Millennials, relationship, team-spirit. Case Study: Sun-2-Shade - Theories of Motivation Case summary The Sun-2-Shade case reflects the situation whereby workers do not feel motivated in spite of the business flourishing, good pay and a supportive supervisor. The significant descriptive words in the case like boring job, resenting supervisor help and late-coming clearly point to the estrangement between the supervisor and his workers, who are said to be around his age group (Gen Xers and Millennials). There is an absence of team-spirit, no sense of belonging or accepting responsibility... time, I...
3 Pages(750 words)Essay

...?Work Motivation Theories Introduction Motivating employees is very important in ensuring that they contribute to the success of the organization. Motivation resulting from equitable treatment of employees has been attributed to the increasing creativity among employees. Creativity leads to the development of important ideas, which is atopic of increasing interest and value to the organization as the pace and uncertainty of work continue to increase. Motivation is thought to improve creativity by creating favorable conditions for exploration and risk taking. Motivation has been explained according to the equity theory and...
10 Pages(2500 words)Research Paper

...motivated and exercise thinking and self control in everything they do (. This employees believe that the employees always have the company’s interests at hand; hence they do not have to work under strict control16. Work is as natural compared to play; hence, should be enjoyed 17. Comparing them to theory X employers, it is imminent that theory Y employers will have better relations with the employees and gain much of their trust; hence the theory y employees will always be greatly motivated and do their best for the company19. Conclusion With all this, I come to a conclusion that employers must be friendly to employees and create trust...
5 Pages(1250 words)Essay

...Running Head: THEORIES OF MOTIVATION Theories of Motivation in Harvard Style by Motivation has been and is still an important issue in human resource management. Various theories have been established which raises the issue of what motivates employees to do their best in the accomplishment of a particular task (Finemann, Sims & Yannis 2006). However, it should be noted that even though the main theories of motivation which have gained recognition could not adequately suffice as each has its own set of strengths and weaknesses. This paper will examine two major theories of motivation namely Maslow's hierarchy of needs and the equity theory. After an analysis of each theory's strengths and weaknesses and a comparison of the two... , it will...
2 Pages(500 words)Article

...Academia Research March 18, 2007 Absenteeism & Motivation Theories Introduction The term motivation possesses something in itself, according to Robbins motivation is "the process that accounts for an individual's intensity, direction, and persistence of effort toward attaining a goal", motivation always put very positive impact on not only an employee's mind but on every single living being in this world, one can understand that if there wouldn't be any such thing as motivation then no body would have any charm in life or would have no courage or desire to achieve something in life, the motivation is specifically used in...
7 Pages(1750 words)Essay

.... Maslow et al. (1954) describes self-actualization as a person's need to be and do that which the person was "born to do." Thus, self-actualization is the desire to become what one is capable of becoming. Frederick Herzberg (1856-1915) had close links with Maslow et al. (1954) and believed in a two-factor theory of motivation. He argued that there were certain factors that a business could introduce that would directly motivate employees to work harder (Motivators). However there were also factors that would de-motivate an employee if not present but would not in themselves actually motivate employees to work harder (Hygiene factors)....
11 Pages(2750 words)Essay

...﻿ Team Motivation: Management Theories Abstract This work describes a situation in which a banking manager has just been assigned to her first supervisory position. Within the company, a problem has arisen in which the manager's employees are passing customer phone calls to management inappropriately, rather than dealing with the nature of the calls themselves. The manager has a growing concern about motivation among her staff and has begun examining new outlooks for motivation. This work describes potential available methods and management theories designed to increase effectiveness amongst her staff and better enhance current process involving...
9 Pages(2250 words)Essay

...). Alderfer’s ERG theory: Unlike Maslow, Alderfer emphasized that needs can be classified into three categories instead of five namely existence, relatedness and growth. Existence needs are consistent with the physiological and safety needs identified by Maslow. Relatedness needs relate to the interpersonal links of humans and are consistent with the belongingness and esteem needs identified by Maslow. Growth needs recognized by Alderfer are comparable to the Malow’s esteem and self-actualization needs. Analysis: The most basic difference between Alderfer’s ERG theory and Maslow’s hierarchy of needs theory is that unlike the latter, the former states that upper level...
1 Pages(250 words)Essay

...Motivation Theories al Affiliation: Motivation is the power that instigates channels and maintains goal-driven actions. Different theories have been developed to explain the concept of motivation. One of these theories I mostly agree with include Instinct theory of motivation, which implies that people tend to act in certain ways because they are automatically programmed to act so as suggested by Miner (1994). For instance in the world of animals when it comes to seasonal migration, they are not told to do so but it is within their mind that they have to do so. Another motivation...
1 Pages(250 words)Essay
sponsored ads
Save Your Time for More Important Things
Let us write or edit the assignment on your topic "Relationship Between Theories of Motivation" with a personal 20% discount.
GRAB THE BEST PAPER

Let us find you another Assignment on topic Relationship Between Theories of Motivation for FREE!