Comments (0)
Add to wishlistDelete from wishlist
Cite this document
Summary
For instance, the main conflict is between David and Goliath. Still, this is only a conflict as the reason these two individuals fight is because they represent the two armies that have come into battle.
There are…
Download full paperFile format: .doc, available for editing
HIDE THIS PAPERGRAB THE BEST PAPER94.2% of users find it useful 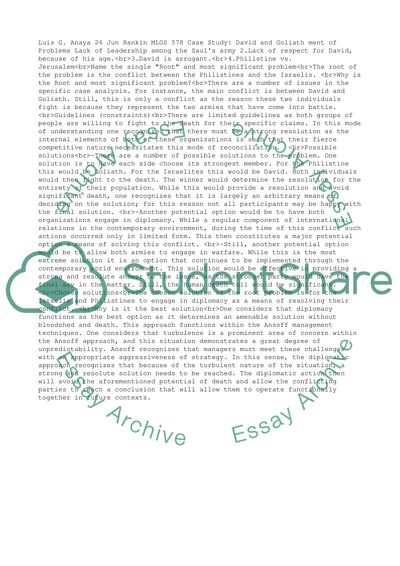 Luis G. Anaya 26 Jun Rankin MLOS 578 Case Study: David and Goliath ment of Problems Lack of Leadership among the Saul’s army 2.Lack of respect for David, because of his age.
3.David is arrogant.
4.Philistine vs. Jerusalem
Name the single “Root” and most significant problem
The root of the problem is the conflict between the Philistines and the Israelis.
Why is the Root and most significant problem?
There are a number of issues in the specific case analysis. For instance, the main conflict is between David and Goliath. Still, this is only a conflict as the reason these two individuals fight is because they represent the two armies that have come into battle.
Guidelines (constraints)
There are limited guidelines as both groups of people are willing to fight to the death for their specific claims. In this mode of understanding one recognizes that there must be a strong resolution as the internal elements of both of these organizations is such that their fierce competitive nature necessitates this mode of reconciliation.
Possible solutions
-There are a number of possible solutions to the problem. One solution is to have each side choose its strongest member. For the Philistine this would be Goliath. For the Israelites this would be David. Both individuals would then fight to the death. The winner would determine the resolution for the entirety of their population. While this would provide a resolution and avoid significant death, one recognizes that it is largely an arbitrary means of deciding on the solution; for this reason not all participants may be happy with the final solution.
-Another potential option would be to have both organizations engage in diplomacy. While a regular component of international relations in the contemporary environment, during the time of this conflict such actions occurred only in limited form. This then constitutes a major potential option a means of solving this conflict.
-Still, another potential option would be to allow both armies to engage in warfare. While this is the most extreme solution it is an option that continues to be implemented through the contemporary world environment. This solution would be effective in providing a strong and resolute answer to the issue, as the stronger party would have the final say in the matter. Still, the human death toll would be significant.
Chosen solutions
The chosen solution of the root problem is for the Israelis and Philistines to engage in diplomacy as a means of resolving their conflict.
Why is it the best solution
One considers that diplomacy functions as the best option as it determines an amenable solution without bloodshed and death. This approach functions within the Ansoff management techniques. One considers that turbulence is a prominent area of concern within the Ansoff approach, and this situation demonstrates a great degree of unpredictability. Ansoff recognizes that managers must meet these challenges with an appropriate aggressiveness of strategy. In this sense, the diplomatic approach recognizes that because of the turbulent nature of the situation, a strong and resolute solution needs to be reached. The diplomatic action then will avoid the aforementioned potential of death and allow the conflicting parties to reach a conclusion that will allow them to operate functionally together in future contexts. Read More
Share:
Tags
Cite this document
(“The case method of stratigic analysis David and Goliath Essay”, n.d.)
The case method of stratigic analysis David and Goliath Essay. Retrieved from https://studentshare.org/management/1599363-the-case-method-of-stratigic-analysis-david-and-goliath

“The Case Method of Stratigic Analysis David and Goliath Essay”, n.d. https://studentshare.org/management/1599363-the-case-method-of-stratigic-analysis-david-and-goliath.
Comments (0)
Click to create a comment or rate a document

...?Introduction During the contemporary period, it can be d that organisations operate in an environment that is characterised by external factors over which the company in some cases has very little control and when investigating these wider factors it is referred to as marketing audit or environmental scanning (Lancaster & Reynolds 1999). On the other hand, the internal environment has a bearing on the way an organisation operates as well. Against this background, this essay seeks to critically evaluate the strategic development of Red Bull GmbH’s product and marketing strategy paying particular attention to external factors that might affect the product. The following analytical tools namely: SWOT...
10 Pages(2500 words)Essay

David and Goliath: Youth and the Bombardment of Commercialism

...﻿David and Goliath: Youth and the Bombardment of Commercialism The giving of government grants is an incredibly difficult task – there are always a myriad of admirable choices between the groups that desperately need the money and could really do good things with it. With a grant of $1,000,000, it is essential that it goes to a group that could take advantage of it and truly be useful for the country. What exactly would make an organization a good choice to receive a grant of this size from the government? There are several factors that need to be considered. Firstly, and most obviously, the campaign needs to have worthy aims that deserve governmental support – it should address a real problem. It...
5 Pages(1250 words)Essay

...DAVID REIMER CASE Objective: The paper aims to explain the Butler philosophical ideology of inter sex and human life. UNDOING GENDER Judith Butler explains us the idea of intersex and human life in her own philosophical way in the book "Undoing Gender". We can say that Butler knows the art of saying ordinary things in extra ordinary way. In this book he focused on the question that "what it might mean to undo restrictively normative conceptions of sexual and gendered life" (Butler 2004, 1). In this regard author says that,"sometimes a normative conception of gender can undo one's personhood, un determining the capacity to persevere in a livable life". We all want to live our desired life and the only...
7 Pages(1750 words)Essay

...Leadership - strategic communication Identifying a good leader is challenging task. There are several parameters that need to be looked into while selecting a good leader. Leadership is all about building peak performing teams, teams focused on accomplishing goals. Team building and vision is the core of leadership. Leaders are able to effectively communicate and motivate the team to perform the set goals. Psychological research has discovered the following positive personality variables associated with strong leadership that includes warmth, friendliness, self-confidence, ability to stand up to pressure. These researches have also found that the absence of the negative qualities of arrogance, hostility, boastfulness, egotism... - strategic...
2 Pages(500 words)Essay

...s Analyzing the Curious Case of Benjamin Button David Fincher is consideredas one of the most influential filmmakers in Hollywood, who has numerous highly acclaimed movies that grace his résumé. He has made his niche in the filmmaking industry by employing some of the most innovative techniques that made his movies not only a commercial but a critical success all over the world. David Fincher’s immaculate knowledge about filmmaking skills were not acquired through back breaking labor and an impressive GPA at a film school, but he picked up on these skills after working with directors like George Lucas. He has many successful filmmaking ventures under his name, but the substance of this...
6 Pages(1500 words)Essay

...Malcolm Gladwell’s “David and Goliath” Presentation Malcolm Gladwell’s “David and Goliath” Presentation Gladwell uses context to communicate his analysis of the biblical account of David by explaining how size is not the upper in a competitive or demanding situation. More specifically, the presentation considers David’s physical size and traditional weapon competitive advantage over the giant Goliath.1 Through this contrast, Gladwell shows how people underestimate the significance of agility and speed the same way the Israelites and Palestinians doubted David’s ability to beat...
1 Pages(250 words)Assignment

.... Needs Assessment Needs assessment aspect is a systematic process that aid in the determination and address of the gaps or needs identified between the apparent and the desired conditions. In this case, the discrepancy that exist between the current and desired conditions must be determined to ensure the identification of the appropriate need. The approach has an emphasis on the outcomes and gathers information via established methods and procedures to inform the management on the gaps identified. In so doing, the company will realize the challenges is facing and address them. The identification of the gaps leads to the maximum allocation of resources to ensure that the needs achieve optimal address to...
2 Pages(500 words)Essay

Examination of the David and Goliath Myth

...and creativity especially when the opponent is perceived to be powerful. In essence, the bible highlights the story of David defeating Goliath, a mighty giant-soldier, with only a sling and a stone (Gladwell 24). Gladwell tries to reveal how people misread the battles between ‘giants’ and ‘underdogs’ in most in the olden and modern world. A critical analysis of the David and Goliath story reveals that David was the giant, and Goliath the underdog. Gladwell notes that there is a disadvantage in the perceived advantaged classroom setups. He elaborates the situation using the inverted U curve Theory. Using the theory, it is...
7 Pages(1750 words)Term Paper

...and the one that is on the insolvency way. The developer should consider carrying out breakeven analysis it is fundamental to its growth and success or Goliath failure. It is likely that Goliath could have an incorrect breakeven point if it has in accurate or incorrect information and in the process end up having units sold at a loss. Such practices ultimately result in the insolvency of the business organization. Accountants apply the excel spreadsheet when determining the breakeven point for Developer. Fixed Cost / (Unit Price - Variable Unit Cost) Sales price – variable costs = input margin.(Harold, 2012) Fixed Costs + Variable Costs = Breakeven Sales Dollars The process of analysing...
10 Pages(2500 words)Research Proposal
sponsored ads
Save Your Time for More Important Things
Let us write or edit the essay on your topic "The case method of stratigic analysis David and Goliath" with a personal 20% discount.
GRAB THE BEST PAPER

Let us find you another Essay on topic The case method of stratigic analysis David and Goliath for FREE!