Understanding and managing customers in the chocolate market - Essay Example

Comments (0)
Add to wishlistDelete from wishlist
Cite this document
Summary
The chocolate market is one of the successful market sectors in the world. It targets a wide range of customers from children up to senior citizens. However, entering in this kind of market without sufficient knowledge and experience will just incur losses…
Download full paperFile format: .doc, available for editing
HIDE THIS PAPERGRAB THE BEST PAPER98.9% of users find it useful 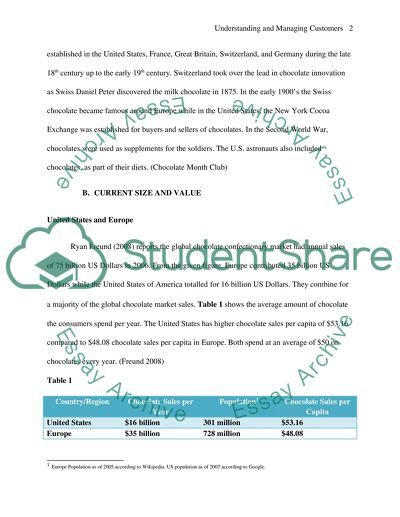 Extract of sample "Understanding and managing customers in the chocolate market"

Download file to see previous pages The chocolate market is one of the successful market sectors in the world. It targets a wide range of customers from children up to senior citizens. However, entering in this kind of market without sufficient knowledge and experience will just incur losses.It is important to know how the different chocolate companies like Hershey, Cadbury, and Nestle were able to achieve success in the chocolate business. This paper discusses the current events that are happening around the chocolate sector in order to provide relevant information to potential clients entering the chocolate market.It also provides information on the current size and value as well as the trends and development in the chocolate industry. This paper tends to analyze the risks and opportunities in entering this kind of market sector.The cocoa into which chocolate is created was discovered in the Amazon 4000 years ago (2000 B.C.). The cocoa was part of the Mayan culture (6 AD to 600 AD) and symbolized as the "god's food." For the Aztecs (1200 AD), cocoa beans were used for currency. In the early decades of the 16th century, the process of making chocolate drink 'Chocolati' was learned. In the same period, Hernando Cortez established the first cocoa plantation in Mexico. The chocolate arrived in Spain in 1528 and became popular in Europe not until the 17th century. The first chocolate made by machine was produced in Spain. Several chocolate factories were established in the United States, France, Great Britain, Switzerland, and Germany during the late 18th century up to the early 19th century. Switzerland took over the lead in chocolate innovation as Swiss Daniel Peter discovered the milk chocolate in 1875. In the early 1900's the Swiss chocolate became famous around Europe while in the United States, the New York Cocoa Exchange was established for buyers and sellers of chocolates. In the Second World War, chocolates were used as supplements for the soldiers. The U.S. astronauts also included chocolates, as part of their diets. (Chocolate Month Club)
B. CURRENT SIZE AND VALUE
United States and Europe
Ryan Freund (2008) reports the global chocolate confectionary market had annual sales of 75 billion US Dollars in 2006. From the given figure, Europe contributed 35 billion US Dollars while the United States of America totalled for 16 billion US Dollars. They combine for a majority of the global chocolate market sales. Table 1 shows the average amount of chocolate the consumers spend per year. The United States has higher chocolate sales per capita of $53.16 compared to $48.08 chocolate sales per capita in Europe. Both spend at an average of $50 on chocolates every year. (Freund 2008)
Table 1
Country/Region
Chocolate Sales per Year
Population1
Chocolate Sales per Capita
United States
$16 billion
301 million
$53.16
Europe
$35 billion
728 million
$48.08

The British people are regarded as the biggest chocolate consumers in Europe consuming at an average of 10 kilos each person, every year. The British market is said to be around 4 billion Pounds. The two leading chocolate markets in United Kingdom are Cadbury and Nestle. (BBC News 2004) Table 2 shows the market value for chocolate confectionery in UK from 2004 to 2008. The chocolate market is sub-divided in to six (6) categories which are: "'boxed', 'moulded bars', 'Seasonal', 'Countlines', 'Straightlines' and 'other' Chocolate". (Business Insights 2008)
Table 2

Germans and French are the next largest chocolate consumers in Europe eating annually at around 8.3 kilos and 5.8 kilos each respectively. (Food Production Daily 2005) Table 3 illustrates the value of chocolate confectionery sales in Germany from 2004 to 2008. Like in Table 1, the sales value is further divided into six (6) subcategories.2
Table 3


Asia
In Asia, the Japanese eat at an annual average of 2.2 to 2.3 kilos each. In China, the Chinese are eating chocolates at an average of 1 ...Download file to see next pagesRead More
Share:
Tags
Cite this document
(“Understanding and managing customers in the chocolate market Essay”, n.d.)
Retrieved from https://studentshare.org/macro-microeconomics/1534194-understanding-and-managing-customers-in-the-chocolate-market

(Understanding and Managing Customers in the Chocolate Market Essay)
https://studentshare.org/macro-microeconomics/1534194-understanding-and-managing-customers-in-the-chocolate-market.

“Understanding and Managing Customers in the Chocolate Market Essay”, n.d. https://studentshare.org/macro-microeconomics/1534194-understanding-and-managing-customers-in-the-chocolate-market.
Comments (0)
Click to create a comment or rate a document

... which Modelo decided to capture the target market. Gambrinus was also an experienced distributor which was operating in other 25 states in the country. There was huge competition between these two distributors although they were not catering to the same geographical market. According to Modelo’s strategy, distributors were responsible for all activities regarding the transport, custom clearance, insurance, pricing strategy, advertising campaigns and sale of the beer. However Modelo reserved the right of final decision regarding the brand image. Furthermore a subsidiary named Procermex Inc. was set up by Modelo with the purpose of coordinating, supporting and supervising the two distributors of the company. The company maintained a healthy...
7 Pages(1750 words)Assignment

Given the emergent nature of online commerce, it is a tough task for retailers to develop a website that meets all expectations from consumers. This view is supported by a survey conducted by the UK’s largest e-consultancy Cap Gemini. The survey identified several key disadvantages for online shoppers. Some of these include “’ Availability’, ‘Can’t be in to receive delivery’, ‘Premium charged for delivery’, ‘Can’t see or feel the merchandise’, etc.” (Quader & Quader, 2008) These are not trivial complaints by any means and despite the e-retailing industry setting foot into its third decade in existence, there are no satisfactory solutions found for th...
6 Pages(1500 words)Literature review
sponsored ads
Save Your Time for More Important Things
Let us write or edit the essay on your topic "Understanding and managing customers in the chocolate market" with a personal 20% discount.
GRAB THE BEST PAPER

Let us find you another Essay on topic Understanding and managing customers in the chocolate market for FREE!