Reflections on the Economics - Essay Example

Comments (0)
Add to wishlistDelete from wishlist
Cite this document
Summary
This paper "Reflections on the Economics" presents a climatic impact on the economy. For example, the sectors that are dependent on the ecosystem and forestation will feel the pinch. While the countries are “insulated from such disaster” as these economies are not dependent on agriculture…
Download full paperFile format: .doc, available for editing
HIDE THIS PAPERGRAB THE BEST PAPER99% of users find it useful 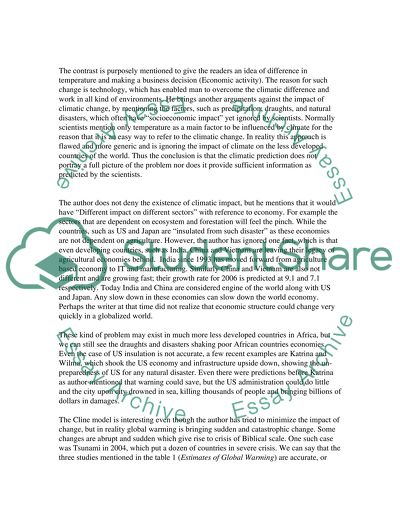 Extract of sample "Reflections on the Economics"

Download file to see previous pages The approach is ideal because instead of jumping to conclusion, he explores the issue of green house warming and its impact on the world. The "Green house effect" part is given more space than required, which could have been avoided, as writing two paragraphs just to define the Green House effect is too much, especially if the audience are scientists, and are knowledgeable about the topic. Even the second paragraph seems a bit out of space, the better approach would have to combine two paragraphs, into one paragraph and add only the importance part relevant to the topic, such as "concentration of CO2" in the atmosphere. The figure1" projection of global temperature increase" is an excellent way to show the scale of the problem; the readers can easily see scale of the problem. The figure shows two hundred years change (1900 to 2100), which is enough time to see the visible changes in the climate. It clearly shows, how the temperature has increased over the time and how much it will further increase.

However, he counters the argument of doomsday prediction with his own model and mentions that it is not exactly possible to predict the climatic conditions as the scientists have claimed in their model. The reason he mentions is that the climatic model depends on economic models, and slower economies and higher fuel prices will decrease the emission of gases in the atmosphere. And another reason against the climatic catastrophe is that "climate flips from one locally stable equilibrium to another" and it is not possible for climatologist at present to exactly predict what will happen, unless they come up with bigger and exhaustive models.


The writer moves to "Impacts of the Climate Change" and mentions that two centuries ago a man was highly dependent on day and light timing, but technology has changed he slavery to natural timing and now man is no longer dependent for his economic and agricultural needs upon the natural environment. He provides solid arguments by mentioning the case of a business firm which wishes to start a business is not concerned about climate, even if the difference is as great as Moscow and Hong Kong (Moscow has extremely cold temperature, while Hong Kong is an island and has a mild temperature).

The contrast is purposely mentioned to give the readers an idea of the difference in temperature and making a business decision (Economic activity). The reason for such change is technology, which has enabled man to overcome the climatic difference and work in all kind of environments. He brings another argument against the impact of climatic change, by mentioning the factors, such as precipitation, droughts, and natural disasters, which often have "socioeconomic impact" yet ignored by scientists. Normally scientists mention the only temperature as the main factor to be influenced by climate for the reason that it is an easy way to refer to the climatic change. In reality, this approach is flawed and more generic and is ignoring the impact of climate on the less developed countries of the world. Thus the conclusion is that the climatic prediction does not portray a full picture of the problem nor does it provide sufficient information as predicted by the scientists.

CHECK THESE SAMPLES OF Reflections on the Economics

They need to overcome the handicap of smallness by strategic alliances and mergers with larger or technically more competent entities. Small firms...
10 Pages(2500 words)Assignment

Let us find you another Essay on topic Reflections on the Economics for FREE!