Comments (0)
Add to wishlistDelete from wishlist
Cite this document
Summary
The geography of Africa has to a large extent shaped the kind of economic opportunities available for the African countries and, thus, impacted on the economic development of the continent in general…
Download full paperFile format: .doc, available for editing
HIDE THIS PAPERGRAB THE BEST PAPER95.6% of users find it useful 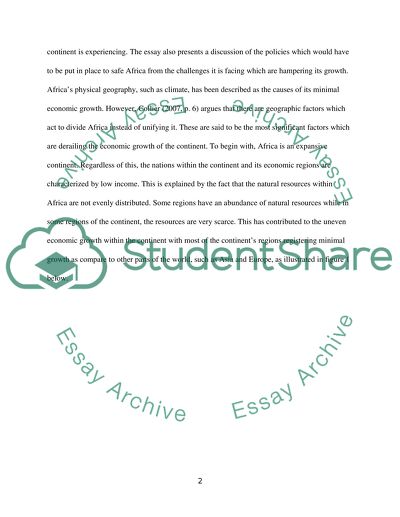 Download file to see previous pages The geography of Africa has to a large extent shaped the kind of economic opportunities available for the African countries and, thus, impacted on the economic development of the continent in general. The interaction between human and physical geography within the framework of economic development has been a major factor which is shaping the direction and rate of Africa’s economic development. This essay gives a critical analysis and discussion of the importance of geography in the economic growth of Africa, including the tragic economic challenges that the continent is experiencing. The essay also presents a discussion of the policies which would have to be put in place to safe Africa from the challenges it is facing which are hampering its growth. Africa’s physical geography, such as climate, has been described as the causes of its minimal economic growth. However, Collier (2007, p. 6) argues that there are geographic factors which act to divide Africa instead of unifying it. These are said to be the most significant factors which are derailing the economic growth of the continent. To begin with, Africa is an expansive continent. Regardless of this, the nations within the continent and its economic regions are characterized by low income. This is explained by the fact that the natural resources within Africa are not evenly distributed. Some regions have an abundance of natural resources while in some regions of the continent, the resources are very scarce. This has contributed to the uneven economic growth within the continent with most of the continent’s regions registering minimal growth as compare to other parts of the world, such as Asia and Europe, as illustrated in figure 1 below. Figure 1: Comparative Per Capita Growth The physical geography of Africa is very enormous. Bloom and Sachs (1998, p. 207) point out that even if Africa is a large continent, it has been divided into many countries. For this reason, most of the countries within the continent are landlocked. The divisions of countries within Africa have a result caused nations to be divided into those landlocked states which are rich in resources and those which have scarce resources. Moreover, some countries are coastal and rich in resources while others are costal but lack adequate resources. These four categories define the economies of Africa in terms of its physical geography. Those states which have scarcity of resources whether coastal or landlocked are lagging behind in the economic development. Because these two categories of nations are the majority within the continent, Africa’s growth in generally slow as compared to other regions. The landlocked states within Africa lack competitiveness in export and import trade. Lack of competitiveness has also affected the coastal countries. Naude (2004, p. 821) explains that the differences between the resource rich African states are not significant. This is the case whether the resource rich states are landlocked or coastal. It is because of the divisions within African states that the competitiveness in the export and import business has been derailed and thus making the content to have a tragic growth level within its economy. However, costal states in Africa participate in export trade but the landlocked countries are prevented from economic interaction with the world markets. The distribution of the African population is even unlike other developing regions such as Asia in which a majority of the population lives within the costal countries. Even though the trend of economic growth in Africa is generally parallel to that of the global economy, Africa ...Download file to see next pagesRead More
Share:
Tags
Cite this document
(“African Geography and Growth Essay Example | Topics and Well Written Essays - 1500 words”, n.d.)
African Geography and Growth Essay Example | Topics and Well Written Essays - 1500 words. Retrieved from https://studentshare.org/macro-microeconomics/1445642-how-important-is-geography-in-africayies-growth
(African Geography and Growth Essay Example | Topics and Well Written Essays - 1500 Words)
African Geography and Growth Essay Example | Topics and Well Written Essays - 1500 Words. https://studentshare.org/macro-microeconomics/1445642-how-important-is-geography-in-africayies-growth.
“African Geography and Growth Essay Example | Topics and Well Written Essays - 1500 Words”, n.d. https://studentshare.org/macro-microeconomics/1445642-how-important-is-geography-in-africayies-growth.
Comments (0)
Click to create a comment or rate a document

CHECK THESE SAMPLES OF African Geography and Growth

African-American Dance Has Evolved Throughout Time

March 13th is the date devoted to African-American Dance. Africans introduced their dances to North and South America and the Caribbean Islands as slave labor beginning in the 1500s. The dance methods of tons of African cultural crowd combined with European dances, figuring the expansion of the African visual in the Americas. Dance has always been an essential piece of everyd...
7 Pages(1750 words)Essay

CAR is known to be one of the poorest nations in the African continent, apart from its frequent dependence on international donations in terms of food, clothing and medicinal supplies, CAR has also been a war zone for decades. The essay will relay more information on the various plights that children born in the Central African Republic go through while growing up.
Apart from most of the children being orphaned at a tender age due to maternal related problems or diseases such as HIV/AIDS, which is rampant in the nation, most of these children are victims of child trafficking, which is big business in the CAR (Lindborg). Lots of children from as little as 4 years normally go missing without a trace and the fact that the govern...
7 Pages(1750 words)Term Paper
sponsored ads
Save Your Time for More Important Things
Let us write or edit the essay on your topic "African Geography and Growth" with a personal 20% discount.
GRAB THE BEST PAPER

Let us find you another Essay on topic African Geography and Growth for FREE!