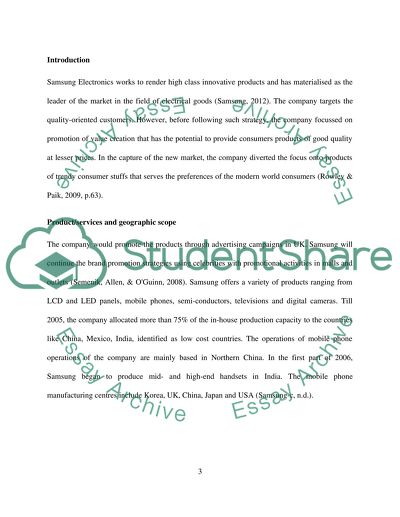 Download file to see previous pages Product/services and geographic scope The company would promote the products through advertising campaigns in UK. Samsung will continue the brand promotion strategies using celebrities with promotional activities in malls and outlets (Semenik, Allen, & O'Guinn, 2008). Samsung offers a variety of products ranging from LCD and LED panels, mobile phones, semi-conductors, televisions and digital cameras. Till 2005, the company allocated more than 75% of the in-house production capacity to the countries like China, Mexico, India, identified as low cost countries. The operations of mobile phone operations of the company are mainly based in Northern China. In the first part of 2006, Samsung began to produce mid- and high-end handsets in India. The mobile phone manufacturing centres include Korea, UK, China, Japan and USA (Samsung-c, n.d.). Competitors Although the company enjoys a large market share, the company faces some serious threat from the other developed or developing companies, namely, Sony Corporation, Videocon and some other well-known brands. If these are direct competitors, the indirect competitors include Media Player from Microsoft, Ovi player from Nokia and several local brands (Schwarzinger, 2012). Sony is a company from Japan and leads the market in consumer-durable products. The prices charged by Sony are generally high, but if one looks for quality, then Sony is the best option to opt for (Sony, 2012). PEST Analysis Political: The political conditions of the countries where Samsung operate pose some risk. The political climate of South Korea became a worrying factor. In the African continent and in the countries of South East Asia, Samsung has distinct disadvantages as the business environment is hostile (Husso, 2011). Economic: Samsung follows a healthy marketing strategy in the countries where they operate. Since high levels of disposable income are required from the consumers to buy their products, Samsung targets the middle income classes. The company tries to enter into the countries where the business cycle for the offered products is in initial stages. Social: The company has been able to integrate itself according to the market structures. The ‘think global, act local’ mindset strengthens the landscape. It has effectively bridged the gap between culture and society. The company initiates to link a balance between the tastes and aspirants of the consumers with the amount of disposable income they possess (Henry, 2008). Technological: The company can take pride depending on the innovative approaches it launches. The products are made using cutting-edge technologies, and the attractive designs are the incentives it provides to the customers. The innovations are the biggest strength of Samsung, and the technological advancements lay the foundation stone to cement the place of Samsung in global markets. SWOT Analysis Strength: The brand value of the company is the biggest strength. The new innovation of 3D television is selling like hot cakes in the market. It is of no surprise that Samsung is the company with the largest market share of 3D television. Other types of television, namely, the LED television, have been successful in providing a large consumer base to the ...Download file to see next pages Read More
Share:
Tags
Cite this document
(“Samsung Company analysis Essay Example | Topics and Well Written Essays - 2500 words”, n.d.)
Samsung Company analysis Essay Example | Topics and Well Written Essays - 2500 words. Retrieved from https://studentshare.org/macro-microeconomics/1402539-samsung

In th...
8 Pages (2000 words) Case Study
sponsored ads
Save Your Time for More Important Things
Let us write or edit the essay on your topic "Samsung Company analysis" with a personal 20% discount.
GRAB THE BEST PAPER

Let us find you another Essay on topic Samsung Company analysis for FREE!