Spatial Inequality around London and other UK Cities - Essay Example

Comments (0)
Add to wishlistDelete from wishlist
Cite this document
Summary
Vast research has been accomplished on singular cities or individual neighbourhood besides starting a trend of cross-city quantitative appraisal of area based inequality and its impact on policy decisions…
Download full paperFile format: .doc, available for editing
HIDE THIS PAPERGRAB THE BEST PAPER91.9% of users find it useful 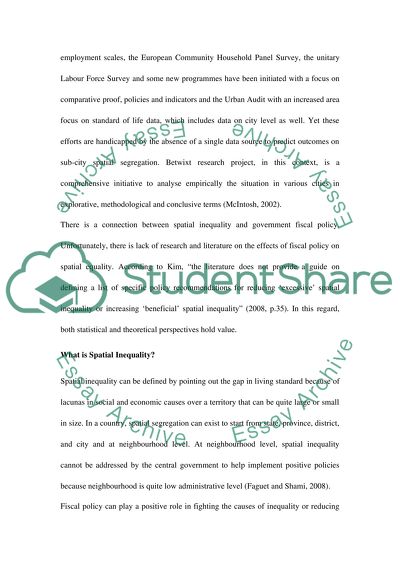 Extract of sample "Spatial Inequality around London and other UK Cities"

Download file to see previous pages 25). Introduction The UK is a welfare state and has been quite active in ameliorating expanding social inequalities that are attached with spatial segregation. This background on spatial segregation has given rise to the basic inquiry over the extent of spatial inequality in London and other cities of the UK.
Spatial inequality is generally gauged by social inequality (as appraised via socio-economic parameters the like of un/employment or standard of education) or on race or ethnicity (as appraised by parameters of race or ethnic minority) (McIntosh, 2002). Data Deficiency Problem of insufficient quantitative data has been dominant across all European cities.
That’s why EUROSTAT and the European Union has initiated research programmes, the like of BETWIXT project on selected cities including London. On social and employment scales, the European Community Household Panel Survey, the unitary Labour Force Survey and some new programmes have been initiated with a focus on comparative proof, policies and indicators and the Urban Audit with an increased area focus on standard of life data, which includes data on city level as well. Yet these efforts are handicapped by the absence of a single data source to predict outcomes on sub-city spatial segregation. ...
defining a list of specific policy recommendations for reducing ‘excessive’ spatial inequality or increasing ‘beneficial’ spatial inequality” (2008, p.35). In this regard, both statistical and theoretical perspectives hold value. What is Spatial Inequality? Spatial inequality can be defined by pointing out the gap in living standard because of lacunas in social and economic causes over a territory that can be quite large or small in size. In a country, spatial segregation can exist to start from state, province, district, and city and at neighbourhood level. At neighbourhood level, spatial inequality cannot be addressed by the central government to help implement positive policies because neighbourhood is quite low administrative level (Faguet and Shami, 2008). Fiscal policy can play a positive role in fighting the causes of inequality or reducing its effects or the possibility is that policy can aggravate the spatial inequality. According to Cheshire (2007), there is a decisive causation relationship between poverty and place. Comparing the indicators of deprivation among residents with affluent neighbourhoods is important but we can not measure how it affects the opportunities in peoples’ lives, as there is no way to keep an eye on them (p. 18). Motivations and desires as well as luck play a role in deciding the place of living. Neighbourhood choice depends on many other factors, as pointed out by Goering et al. (2003). “Since people typically select their neighbourhoods to match their needs and resources, researchers restricted to cross-sectional, non-experimental evidence must try to separate the impact of personal factors affecting choice of neighbourhood from effects of neighbourhood.” (Goering et al., 2003, p. 4). Personal factors impacting ...Download file to see next pagesRead More
Share:
Tags
Cite this document
(“Spatial Inequality around London and other UK Cities Essay”, n.d.)
Retrieved from https://studentshare.org/macro-microeconomics/1394946-spatial-inequality-around-london-and-other-uk-cities

(Spatial Inequality Around London and Other UK Cities Essay)
https://studentshare.org/macro-microeconomics/1394946-spatial-inequality-around-london-and-other-uk-cities.

“Spatial Inequality Around London and Other UK Cities Essay”, n.d. https://studentshare.org/macro-microeconomics/1394946-spatial-inequality-around-london-and-other-uk-cities.
Comments (0)
Click to create a comment or rate a document

The term clinical governance gained importance following the high mortality rate for pediatric cardiac surgery at the Bristol Royal Infirmary. The incident led to the formation by the government in 1998 of the Kennedy Commission, which proved a turning point in overhauling the NHS (Kennedy, 2001). The commission’s final report recommended that change “can only be brought about with the willing...
11 Pages(2750 words)Term Paper
sponsored ads
Save Your Time for More Important Things
Let us write or edit the essay on your topic "Spatial Inequality around London and other UK Cities" with a personal 20% discount.
GRAB THE BEST PAPER

Let us find you another Essay on topic Spatial Inequality around London and other UK Cities for FREE!