Comments (0)
Add to wishlistDelete from wishlist
Cite this document
Summary
In most cases, such opinions are often negating and demeaning in nature. The early American society was a highly segregated one with race and…
Download free paperFile format: .doc, available for editing
HIDE THIS PAPERGRAB THE BEST PAPER94.7% of users find it useful 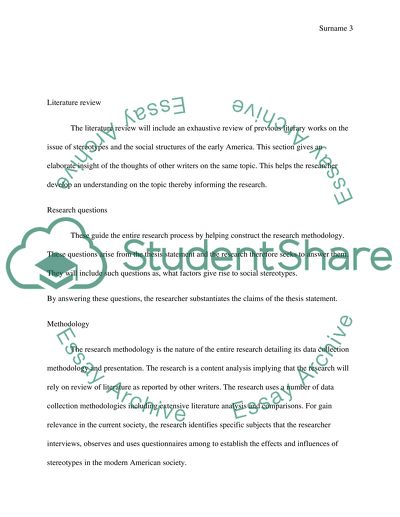 Extract of sample "Everyday Use by Alice Walker"

Research proposal based on the story: Everyday use Working Stereotypes in the early American society; their effects and influences on women’s social lives
Introduction
Stereotypes refer to conventional, formulaic and oversimplified conception or opinion held over a group of people, things or event. In most cases, such opinions are often negating and demeaning in nature. The early American society was a highly segregated one with race and ethnicity being of paramount importance in determination of a personality. People had to associate with the appropriate grouping or risk social ridicule. The commonly held notion was that the whites were superior to the African American community who therefore had to subordinate the whites in every aspect of life. The two groups occupied specific regions and had distinct ways of life. The society experienced a lot of propaganda with each group forming and spreading negative propaganda that eventually became stereotypes over the other thereby becoming important points of consideration on interracial interactions (James and Alan 12).
The research therefore seeks to determine the nature of these stereotypes. In doing so, the research investigates the societal factors that the stereotypes centered on and the way that the affected and influenced the composition of the societies more specifically how the determined the roles of African American women. In their demeaning nature, the stereotypes must have had effects on the relationship of the African American women and their children and husbands among many others especially the whites where most of them worked as house cleaners.
Literature review
The literature review will include an exhaustive review of previous literary works on the issue of stereotypes and the social structures of the early America. This section gives an elaborate insight of the thoughts of other writers on the same topic. This helps the researcher develop an understanding on the topic thereby informing the research.
Research questions
These guide the entire research process by helping construct the research methodology. These questions arise from the thesis statement and the research therefore seeks to answer them. They will include such questions as, what factors give rise to social stereotypes.
By answering these questions, the researcher substantiates the claims of the thesis statement.
Methodology
The research methodology is the nature of the entire research detailing its data collection methodology and presentation. The research is a content analysis implying that the research will rely on review of literature as reported by other writers. The research uses a number of data collection methodologies including extensive literature analysis and comparisons. For gain relevance in the current society, the research identifies specific subjects that the researcher interviews, observes and uses questionnaires among to establish the effects and influences of stereotypes in the modern American society.
Expected results
The research is a content analysis owing to the fact that stratification mechanisms have changed and the society is currently a holistic one. However, there are a number of stereotypes on particular social issues. The research therefore seeks to determine the relationship between the stratification and the social structure as reported by other previous writers on the same topic. Among the expected result is the fact that stereotypes are misconstrued conceptions about other but affect their self-esteem thereby their entire personality.
Additionally, the research seeks to determine the negative effects of stereotypes in the current society thereby influencing the understanding of the audience on the extent to which stereotypes affected the early American society.
Work cited
James, Missy, and Alan Merickel. Reading Literature and Writing Argument. Boston: Pearson, 2013. Print. Read More
Share:
Tags
Cite this document
(“Everyday Use by Alice Walker Essay Example | Topics and Well Written Essays - 500 words - 2”, n.d.)
Retrieved from https://studentshare.org/literature/1620867-everyday-use-by-alice-walker

CHECK THESE SAMPLES OF Everyday Use by Alice Walker

...?“Everyday Use” by Alice Walker In “Everyday Use,” Alice Walker depicts the story of a rural African American family. The story is delivered from theperspective or voice of Mama, a strong and hefty black woman with two girls, Maggie and Dee. Maggie and Dee are entirely contrary to one another, when it comes to personality. Dee exhibits confidence to the point of arrogance, while Maggie has no shred of self-esteem in her. Dee also abhors their rural life, including their house, and during her younger days, desired the wealthier city life. Maggie, on the contrary, cherishes her rural life like her Mama....
3 Pages(750 words)Essay

...? of the of the of the Everyday Use by Alice Walker Alice Walker is a famous feminist who has written various works on the rights of African American women. She has been known to have addressed issues like domestic violence and racism against women. Her current work under discussion came into limelight in the year 1973. The story revolves around a lady belonging to the ‘South’ and her two daughters. Based in the arena of the 60s and the 70s the story is an outcome of the emerging ‘Black’ socialist movements hat were all flared up in those years. The mother referred to as the ‘Mama’ in the story tells the entire tale in first person. Her...
3 Pages(750 words)Essay

...? Everyday Use by Alice Walker Number Everyday Use by Alice Walker depicts a story of the conflicting ideas between a mother and her two daughters, Dee and Maggie, on their heritage, ancestry and identities. The plot and settings of the short narrative is based on the return of Dee, who is thought to be successful due to the education she has received. Her mother’s imaginary hopes are that her daughter will return home a grateful woman, for all her mother has done to ensure that she receives a good education. However, her hopes are dashed when Dee returns with different world views and opinions about her...
4 Pages(1000 words)Essay

Everyday Use by: Alice Walker

...Contents 3 Thesis ment 3 Introduction 4 Conservatism 4 Liberalism 5 Cultural Conflict 6 Methodology 6 Results 7 Everyday Use 8 Work cited 9 Abstract Cultural discrepancies stem from the different views of individuals. These views are developed from individual personalities and influence of the society one is living in. Often the differences are usually the cause of cultural conflicts. The social aspect of humans is founded on the values and beliefs they hold. When a group of people do not share collective values, beliefs and norms they tend to conflict. In the short story by Alice Walker, the two daughters hold contrasting heritages and identities. The conflict between...
4 Pages(1000 words)Research Paper

...“Everyday Use” by Alice Walker When there is a clash of ideas and cultures because of the distances between family members it is often observed that the family takes time to get used to the individual’s perception towards life which has been colored with the outside world. “Everyday Use” is a story about how Mama’s eldest child Dee undergoes a rebellious transformation to understand her own African American heritage. Her identity crisis has more to do with her family’s decision to send her away from the community to gain education. Alice Walker, the author of this story is considered to...
4 Pages(1000 words)Research Paper

...?“Everyday Use” by Alice Walker In Alice Walker’s short story, “Everyday Use,” Mama finds herself in a tough position as her eldest daughter Dee wants to claim the family quilts that Mama promised to Maggie, her youngest daughter. The quilts are family heirlooms, having been made by Mama and Aunt Dicie with material from the clothes of family members who served in the Civil War. After deliberating and trying to understand the personas of both of her daughters, Mama determined that she had made the right choice in promising the quilts to Maggie. Not only would Maggie put the quilts to...
3 Pages(750 words)Essay

...Sur Supervisor Family Conflict in Alice Walker’s “Everyday Use” Written in1973, Alice Walker’s “Everyday Use” foregrounds the conflict within an African American family. The short story portrays Mama, a single mother, and her relationship with her daughters, Dee and Maggie. The physical and intellectual contrast between the sisters leads Mama to have an erroneous perception of her daughters; however, Dee’s so called awareness of her African heritage allows her mother to be conscious of Maggie’s value and Dee’s personality. Indeed, the difference between the sisters explains why Mama places much hope in...
4 Pages(1000 words)Research Paper

Everyday Use by Alice Walker Analysis

...A narration of an inner conflict, conflicts within a person, conflict of a mother with her daughters, inner conflict of the African-Americans struggling to find their identity, Everyday Use voices the feelings of the people in early 70s. Alice Walker, through the conflicts of the mother and her two daughters portrays the feelings of the Blacks. One part of the mother, Dee (one part of the Blacks) wants to forget the roots while the other part, Maggie (the other part of the Blacks) bears the burns and lives the life of pittance. Walker challenges the black people to accept, acknowledge, and respect their American heritage. Through acceptance, they...
4 Pages(1000 words)Essay

Summary of everyday use by Alice Walker

... Everyday Use The story everyday use by Alice Walker revolves around a black family who is living in the oppressed America due to the racial discrimination and stereotyping against the blacks. The story revolves around a mother who has two daughters and is equally proud of them both for different reasons. The mother has carried and adapted to the environment she was brought up in and believes that her daughters would carry the legacy. The story starts when Mama is having joyful memories about the reunion of her daughters Maggie and Dee. Her daughter Dee has been sent to pursue education in the school whereas due to financial constraints Maggie is forced to live at the house only. Dee arrives with her boyfriend who is a Muslim... Everyday...
1 Pages(250 words)Essay

...﻿Everyday Use by Alice Walker The story `Everyday Use` is a part of the short story collection, “In love and trouble: Stories of black women (1973)” and focuses on women`s lives, particularly those belonging to the African culture. This is the story of an African family of one mother and two daughters and how the mother tries to defend her family`s legacy. This story revolves around the return of one daughter, Dee, who is the educated one and has changed her name to Wangero Leewanika Kemanjo. When her mother asked her about her name, she said “`She`s dead.. I couldn’t bear it any longer being named after the people who oppress me`”...
4 Pages(1000 words)Essay
sponsored ads
Save Your Time for More Important Things
Let us write or edit the essay on your topic "Everyday Use by Alice Walker" with a personal 20% discount.
GRAB THE BEST PAPER

Let us find you another Essay on topic Everyday Use by Alice Walker for FREE!