Comments (0)
Add to wishlistDelete from wishlist
Cite this document
Summary
Maggie is yet to experience a lot of things in life that her sisters, which happens to be the unseen TV guests, have already met. Mama is looking for a day that she will be…
Download full paperFile format: .doc, available for editing
HIDE THIS PAPERGRAB THE BEST PAPER93.3% of users find it useful 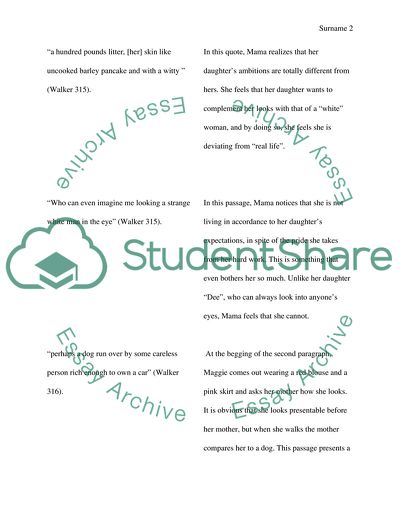 “Everyday Use” by Alice Walker s Commentary “Maggie will be nervous until her sister goes” (Walker 315). “In reallife I am a large, big-boned woman with rough man-working hands” (Walker 315).
“a hundred pounds litter, [her] skin like uncooked barley pancake and with a witty ” (Walker 315).
“Who can even imagine me looking a strange white man in the eye” (Walker 315).
“perhaps a dog run over by some careless person rich enough to own a car” (Walker 316).
“She used to read to us without pity; forcing words, lies, other folk’s habits, whole lives upon us two, sitting trapped and ignorant underneath her voice” (Walker 316).
“At sixteen she had a style of her own: and knew what style was” (Walker 317).
“Often I fought off the temptation to shake her off” (Walker 317)
“bear it any longer, being named after the people who oppress me” (Walker 320).
“be backward enough to put them to everyday use” (Walker 320).
This quote, in the first passage, highlights Mama’s feelings about Maggie’s inferiority to her sister. Maggie is yet to experience a lot of things in life that her sisters, which happens to be the unseen TV guests, have already met. Mama is looking for a day that she will be in a TV studio with her daughter as audience congratulates them.
This passage describes how hard Mama has been working around her property. She usually compares herself to masculine things such as wearing flannel pajamas, killing and cleaning hogs and using a sledge hammer to kill a bull calf.
In this quote, Mama realizes that her daughter’s ambitions are totally different from hers. She feels that her daughter wants to complement her looks with that of a “white” woman, and by doing so, she feels she is deviating from “real life”.
In this passage, Mama notices that she is not living in accordance to her daughter’s expectations, in spite of the pride she takes from her hard work. This is something that even bothers her so much. Unlike her daughter “Dee”, who can always look into anyone’s eyes, Mama feels that she cannot.
At the begging of the second paragraph, Maggie comes out wearing a red blouse and a pink skirt and asks her mother how she looks. It is obvious that she looks presentable before her mother, but when she walks the mother compares her to a dog. This passage presents a change in the Mama’s perspective about “real life”. She now feels that Maggie has a better figure than her sister, Dee. Implying that she will perhaps have a better future than her and Dee.
In this paragraph, Mama is trying to recall how she thought Dee used to hate Maggie and their house. Although she managed to take Dee to school with the help of her church and the a few money she had, she felt that Dee did not appreciate, but turned to hate her house and small daughter. Dee realized the importance of education and wanted to share the knowledge gained with her mother and sister who only felt that they did not necessarily need such knowledge. This paragraph, therefore, indicates different perceptions about education between the educated and uneducated as well as rural and sophisticated population.
At this point, Mama was narrating how Dee used to like nice things, which she always worked hard to achieve. She was quite unlike her mother, who always believed she is a big-boned woman who is conditioned to work. She even says Maggie’s lack of style will finally make her marry John Thomas who has “mossy teeth” (Walker 317).
This quote describes Mama’s rejection of Dee’s higher expectations in life. She is against her daughter’s wish to acquire expensive things and assume a life that she cannot afford. She feels that Dee, like her, should use her energy to do work and live like her.
Dee corrected her mother that her name changed from Wangero Leewanika Kemanjo to Dee because this is name of people who used to oppress her. This sentence highlights some of the significant changes that Dee underwent after school that her mother did not expect. “Wangero” was the name of a revolutionist group that was fighting for the African-American’s place in the white society, during civil rights movement.
This quote describes the time difference between the period when Mama used to be a young woman and her daughters time. She offered Dee (Wangero) two other quilts, but she rejected saying that their time had passed, and even Maggie will not dare to accept them.

...Electronic commerce al affiliation Electronic commerce The drastic development in information technology has resulted into significant effects in the use of computer. Cyber bullying and harassment, through the use of computers, has become common in this information and digital age, resulting into unethical behaviors. Computer harassment involves the use computer to cause disturbance, or pose threats as a result of differences in race, color, gender, disability, or sexual orientation. On the other hand, cyber bullying entails the use of computers to cause psychological harm to others through threats, resulting into adverse effects on their lives and also career. There has been an increase in cyber bullying and computer harassment... commerce...
1 Pages(250 words)Essay
sponsored ads
Save Your Time for More Important Things
Let us write or edit the essay on your topic "Journal" with a personal 20% discount.
GRAB THE BEST PAPER

Let us find you another Essay on topic Journal for FREE!